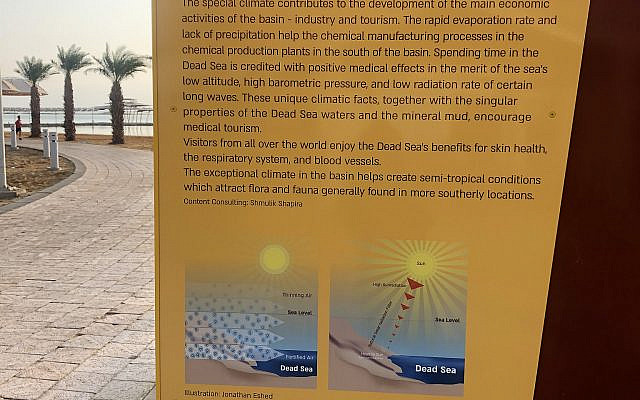 A birthday and a wedding anniversary (55 years!) impelled us to celebrate the double occasion with a weekend of pampering and feasting at one of the hotels situated on the shore of the Dead Sea.

Upon checking in at the hotel we were required to show proof that we had been vaccinated, and were reminded that masks were obligatory in all public areas. When we asked what the situation was with regard to children (our dates coincided with a holiday period in Israel) we were assured that they had to have still-valid negative Coronavirus tests. And the staff? All had to be vaccinated, they said.

The climate of the area around the Dead Sea is very hot, both by day and by night, and the hotel’s air-conditioning system had to work hard to maintain a pleasant temperature throughout the building. Nevertheless, some intrepid guests ventured out to bathe in the very salty water of the Dead Sea while others preferred to benefit from the hotel’s very large fresh-water swimming-pool, with its adjacent relaxation area equipped with capacious shade-beds, loungers, and even a kiosk where soft drinks and ice-cream could be bought. There is also a spa and an indoor salt-water pool, where one can enjoy the benefits of the salt water without having to leave the building.

Apart from the plentiful food that was as varied and sumptuous as anyone could desire, the other attractions provided by the region are the relative peace and quiet. We ventured out in the early morning, when the air was cooler, to explore the paths along the sea-shore that have been provided by the regional authority.

Since our last visit to the region two years ago changes have been made to the surrounding area, with new paths added and a path that used to exist covered over as construction work proceeds alongside it. Thus, the route fronted by flowering bushes and stately trees that I used to take for my solitary morning march along the main road with occasional traffic no longer exists. But a new path, going in the opposite direction, i.e. south rather than north, has been created, and this goes along the sea-shore. My OH joined me for these early-morning excursions, and was as fascinated as I was to find that at various points along it huge notice-boards have been posted containing interesting information about the region.

One of the notice-boards is headed ‘Riverbeds and Flash Floods in the Judean Desert and the Dead Sea Shore,’ and the text describes how the difference in height between the Judean Hills in the east and the Dead Sea valley creates a steep incline which causes the precipitation to be concentrated on the western slopes and prevents the rainfall from reaching the valley further east. In the rainy season the sudden accumulation of water in dry river beds (wadis) can cause flash floods which, while impressive, can be dangerous. Another notice-board, ‘The Judean Desert – a Local Rain Shadow Desert,’ explains how regions such as the Arabian and Sahara deserts are created and defined. In addition to the texts, in Hebrew and English, each notice-board bears a graphic illustration helping to make its point.

A third notice-board is headed simply ‘Climate,’ and this one decribes the features which characterise the Dead Sea region (high temperature, high evaporation rate, high barometric pressure and low radiation) due to the fact that it is situated below sea level. The notice also states that the region is characterized by high humidity, but to the best of my knowledge the opposite is the case. Be that as it may, the natural resources of the Dead Sea are used in the chemical and mineral industries, as well as providing medical benefits.

It all reminds me of my youth, when I studied for my A-level exams in Geography under the formidable Miss Jones. In those far-off days I was conversant with various aspects of physical geography and could use terms such as ‘precipition,’ ‘longitude,’ ‘latitude,’ and ‘rain shadow,’ in their correct contexts. It was a pleasant surprise to come across the new notice-boards which are informative, do not insult the reader’s intelligence and are not retricted to trite, crowd-pleasing platitudes.

So we could return from our weekend break relaxed, refreshed and furnished with new knowledge. But however hard we tried to restrain our appetites, the food was too tempting and delicious, and was very difficult to resist. Now it’s time to work on getting our natural waistlines back.