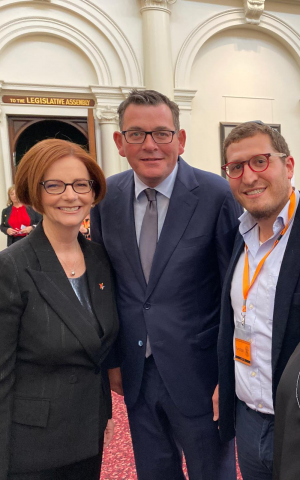 On Wednesday I had the honour of representing my community at Victorian Parliament House for an early Hannuka party. Fortunately enough I was allocated a few minutes in order to brief Former Prime Minister The Honorable Ms Julia Gillard about our growing community and different social programs that are currently underway.

Most importantly though, I was able to thank Ms Gillard specifically for ushering in the National Disability Insurance Scheme. As someone who has witnessed the truly beneficial and positive effects of the NDIS during my Masters of Social Work, these policies are lauded by virtually all on the political spectrum.

As Australian Jews we recognise the true blessing it is to live in this land, a great pluralistic nation which provides for it citizens no matter the circumstances.

Throughout the plethora of characters and personas we encounter in the Torah, why is that the Jewish people are consistently referred to as Bnei Yisrael- the Children of Israel or Kehilat Yaakov- the Congregation of Jacob?

For me, the answer can be found in this week’s Parsha Vayeitzei, and the spiritual perseverance and tenacity Jacob shows in overcoming the various struggles and conflicts he encounters.

Despite the strife and many challenges other patriarchs experienced, Jacob arguably suffered the most. Years later when he is an elderly man Jacob reflects with melancholy before Pharaoh “Few and hard have been the years of my life.” Jacob is the only person throughout the Bible to express such retrospection.

However, despite his difficulties, Jacob and his life story represents the will power and resolve that has strengthened and enabled the Jewish people to survive and thrive till today in the face of an immeasurable number of persecution and calamities. Whether in his dealings with his trickster father-in-law Lavan or the many travesties that befell his children, Jacob’s faith and gratitude for the Divine good never wavers.

Additionally, the many challenges that Jacob faced are still highly relevant and emblematic in today’s day and age.

First, at the opening of this week’s Parsha we find Jacob bivouacking out on a mountain, believed to be Temple Mount. Having barely escaped from the wrath of his brother Esau, Jacob is left destitute and homeless and is forced to use stones as pillows and a parameter against roaming wild beasts. Despite his poor and lackluster circumstances, Jacob nevertheless proceeds to pray, one of the first instances in recorded Jewish history, declaring: “How awesome is this place…this is the gate of heaven.”

Despite his impoverished conditions he nevertheless praises G-d, acknowledging that a higher purpose is at play hoping eventual good will come forth from this current predicament.

We are called by Bnei Yisrael because Jacob established that through good or bad his descendants will preserve and maintain their spiritual connection and recognition of G-d. Despite us living in the most undeniably prosperous and abundant ages in humanity it can still be, for many, challenging and difficult to pray or recognise the innate good which surrounds us.

We may fall on tough times but I can say loudly and confidently how fortunate we are to live in such a “Lucky Country”; a wonderful country practicing our religion openly with a government that strives to take care of each of its citizens no matter their background, ethnicity or disability.

Let us strive to recognize and acknowledge the blessings and good in our lives, no matter the circumstances. Together with this week’s Torah reading about Jacob’s recognition and appreciation of the good in all situations. And as we draw closer to Hanukkah, let us become a beacon of light not just for ourselves but for the people around us.