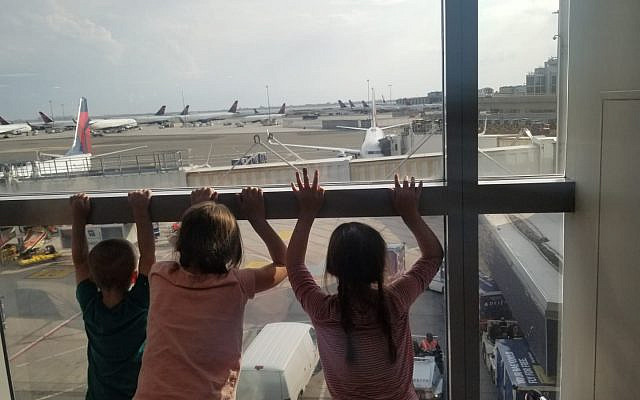 That’s our three grandchildren in the accompanying photo – Sarit Maayan, Emma Pearl, and Henry Charles – at the airport, before a recent plane trip they took with their parents to the West Coast this summer.

What you don’t see is the look of wonder and amazement on each of their faces, as they admire the large metal structure that would soon be transporting them 3,000 miles through the air to their destination.

Unfortunately, I am not nearly enamored of airline flight as my grandchildren these days.  Last month, I went on a business trip to the Dominican Republic, the first time I had been on an airplane since the pandemic began.  And it wasn’t pretty.

The lines through security were impossibly long.  The flight was delayed. The plane was filled to capacity, and my seat seemed smaller than I remembered from my last plane trip.  Passport control was a pain.  The only silver lining was that I just packed a carry-on bag, and avoided another half hour waiting for my suitcase (and the possibility of a lost bag, which I hear has become more commonplace).

It wasn’t always like that.  There was a time, before 9/11, that I actually looked forward to plane trips. And I have fond recollections of the many flights I experienced to various parts of the country and the rest of the world.

I was 11 years old when I finally took my first plane trip.  I know that seems hard to believe for those in my children and my grandchildren’s generation – our oldest granddaughter is 9 years old, and she has already taken more than a dozen plane flights.  Back when I was that age, though, plane travel was a luxury – and all of the vacations and trips our family took were by car. Six to eight hours of driving was no big deal back then, so when I was young my family packed us all into a 1964 Rambler station wagon when we went on any kind of trip.  Who knew about planes?

My mother dressed me up in fancy clothes for my first plane trip, a practice that was commonplace in those days (and something else that’s hard for my kids to believe actually occurred).  I also remember getting a TWA junior aviator flight pin from the captain, which I treasured throughout my trip.  We were served a full-course meal during the flight, with real silverware.  (No worries about a terrorist stabbing someone with a steak knife back then!)  And the flight attendants graciously offered passengers all sorts of amenities that are now reserved only for first-class passengers.

As I got older, plane travel became more common … but it was still something very special.  Even purchasing tickets was a detailed process. Before the Internet, airline tickets were very official looking documents, printed in triplicate, with carbon paper between the copies.  Remember?

There were some early trips I took to Israel, which I also recall fondly.  Back then, nonstop flights from New York to Tel Aviv were not available, so a stop in Europe was required.  Although this meant that it would take much longer to get to my destination, it was an opportunity to see London on one trip to Israel and Zurich on another trip … which I viewed as a bonus.

My wife Sharon grew up in Phoenix, Arizona, and being very close to her family, living in the New York area was not an easy adjustment for her.  However, it did make our plane trips to Arizona something we very much looked forward to.  For the first 20 years of our marriage, we spent every Pesach in Phoenix – blocking off 10 days of our schedule each year. And Chol HaMoed was an opportunity to see various part of the West and Southwest. I feel privileged to have visited the Grand Canyon, Bryce and Zion National Parks, Tucson, San Diego, Hoover Dam, Albuquerque, Santa Fe, San Diego, Los Angeles, and San Francisco, among other sites, all because of our annual Pesach trips to Phoenix, facilitated of course by reliable airline travel.

At some point, probably after 9/11, I began to view airline travel as a necessary component of my business and personal life rather than an activity that I anticipated with excitement.  Instead of vacations which required plane travel, we opted for a beach vacation where we could drive to our destination. I actually began to intentionally avoid business conferences and trips which required plane travel, something I would actually look forward to during the early years of my business career.

And then, of course, COVID descended upon us in March 2020 – which not only made plane travel undesirable but also potentially dangerous.  Not that I likely would have taken many trips even if the pandemic had not occurred.  But it gave me a very good excuse not to have to travel by plane during the past two and a half years.

Don’t get my wrong.  I am still amazed by the fact that you can get to Israel in less than half a day … that you can wake up and take a plane to Los Angeles to attend a business meeting and be on a plane back home and sleep in your own bed that same night … that you can now visit any part of the inhabitable world via plane travel.

In addition, purchasing airline tickets from the comfort of your own home on a computer, and booking your seats, is extremely convenient and has never been easier.  It is all quite remarkable, when you think about it.

Perhaps one day I will once again recapture that thrill and excitement of airline travel. Meanwhile, I have no immediate or long-term travel plans and you can likely reach me at home – I even have a working landline!