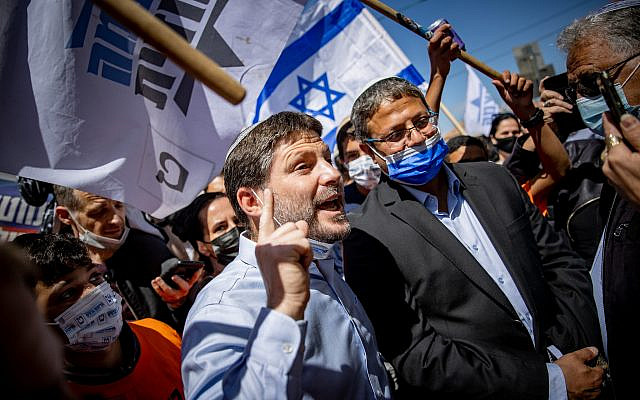 There was a time, not too long ago, when the names Bezalel Smotrich and Itamar Ben-Gvir would elicit shudders from Leftists and mainstream right-wingers alike. Only two years ago, Smotrich was considered too radical to serve as Benyamin Netanyahu’s Justice Minister and Ben-Gvir too extreme to even be mentioned, much less step foot into the annual AIPAC conference. Today, a much different reality exists, Smotrich is considered a top Netanyahu ally outside of his own party rivaled perhaps only by Shas’ Aryeh Deri and Ben-Gvir a media golden goose, a figure every Israeli pundit and talking head cannot wait to get on the air.

It seems like history is moving in a very favorable direction for the Religious Zionist Party (RZP). Recently, Public Security Minister Omer Barlev (Labor) stated he would brief Smotrich on security matters but not Ben-Gvir, on account of his alleged extremism. Had Barlev held this post two years ago, he would likely exclude both Members of Knesset from his security briefings and face no political backlash for doing so. Two years from now, it would be unlikely that Ben-Gvir would still be excluded, and perhaps more likely that he or another RZP member would be providing those security briefings.

There are many reasons for the mainstreaming of RZP and its members of which capitulation or compromise are not one. Neither Smotrich nor Ben-Gvir have walked back previous comments or stances on their commitment to protecting Jewish Orthodoxy, to the survival of the Jewish people through a safe Jewish state, or to further ensuring the Jewish character of the state to better secure its great inheritance for future generations. RZP has gone mainstream not because of apologies or platform dilutions, but through their steadfast commitment to their principles. From all sides, RZP has faced pressure to abandon its principles or dilute its platform, and each time RZP has resisted.

It is not the party that changed, but Israel. Israel voted Smotrich, Ben-Gvir, and five other RZP members into Knesset, giving the once-fringe, growing party a mandate equal to the once-dominant, withering Labor Party, like ships passing in the night. It is well documented that Israel is increasingly religious and nationalistic, it only makes sense that these trends benefit the Religious Zionist Party. The Israeli media has been forced to recognize RZP as the ideological leaders of the National Camp and its chiefs as undeniably interesting people who have captured the Israeli imagination with ideas both fresh to the Israeli body politic and grounded in Jewish philosophy and history.

This is not to say that RZP has been a passive bystander as Israel has changed around them. Their growing popularity is in no small part thanks to veteran politician Dr. Michael Ben-Ari, a legend of political theatre, orchestrating simple schemes to prove political points. Ben-Ari’s most famous stunt occurred in 2011 when Ben-Ari bussed dozens of Sudanese infiltrators to a public pool in affluent, liberal North Tel Aviv, angering the pool-goers, echoing the anger that less affluent, typically Mizrachi and traditional Israelis feel when dealing with these aliens on a daily basis. While banned from the Knesset in 2019, Ben-Ari has taken a behind-the-scenes role in RZP, bringing his penchant for political pageantry and affinity for media-savvy into the fray. Ben-Ari’s influence has already been seen in RZP’s jovial relocation of party headquarters to a tent in Jerusalem’s Shimon HaTzadik neighborhood during the boiling point of the recent tensions, repeating the same stunt with another tent in Lod during the Arab-Jewish riots there, and successfully lobbying for the Jerusalem Flag march, complete with Smotrich dancing on marchers’ shoulders and Ben-Gvir grabbing a microphone and becoming a temporary correspondent for Channel 13.

The Israeli people look at the Knesset, the body meant to represent them and their concerns, they see instead something wholly removed from themselves, out of touch, an entity with which they share little. They see men and women who care much for portfolios and political decorum and little for their people, their state, their sovereignty, and their security. They see people who cry bloody murder when promises between politicians are broken but shrug off and excuse broken promises to the Israeli people as a part of the political game. Then, they see RZP, a party whose members show deference to their people and their heritage rather than its modernist political institutions and their inhabitants. Perhaps this is RZP’s greatest asset, the strongest force behind its mainstreaming, its connection to the Israeli people; the fact that it cares about what Israelis care about and does not care about what Israelis do not care about.

It is truly remarkable how RZP and its members have gone from pariahs to pillars of Israeli politics in such a short time. It is doubly remarkable that they have accomplished this feat without apologizing, backtracking, or diluting themselves. They have grown and will continue to grow through their unwavering commitment to their principles, to the Jewish people, her heritage, her survival, and her state and their growing reputation as happy warriors, glad mischief-makers fighting for the real interests of Israel with a smile. This, compounding with demographic and ideological trends favorable towards RZP’s core base of Religious Zionists, RZP will surely only grow as the years go by.

About the Author
Jesse Edberg is a member of the Religious Zionist Party's youth wing. He has previously served as a spokesman and graphic designer for the Yamina Youth and has written for such publications as The Post Millenial and The Israel Press. Jesse is a student at the Tulane University of Louisiana where he is pursuing a degree in political science.
Related Topics
Related Posts
Comments
Advertisement