Before Jacob dies, he gathers his sons together so that he can tell them [Bereishit 49:1] “what will befall them at the end of days”. What follows is less of a prophecy and more of a legacy. Each son receives a personalized message relevant for him and for his future descendants. In this shiur, we will concentrate on one part of Judah’s legacy.

Jacob tells Judah [Bereishit 49:10] “The sceptre shall not depart from Judah, nor the ruler’s staff from between his feet; until Shiloh arrives”. The Talmud in Tractate Sanhedrin [5a] explains that Jacob is promising Judah that all future Kings of Israel from David onward will come from the Tribe of Judah. Moreover, all of the exilarchs – the leaders of the Jewish autonomy in Babylonia – as well as the heads of the Jewish communities will also hail from the Tribe of Judah. And so it was. Other than a two-hundred year span in which the Hasmonean Priests reigned, the Israelite king always came from the Davidic dynasty[1]. Moreover, the famous medieval commentator, Rashi, explains that the future Messiah – referred to by Jacob as “Shiloh” – will also be a descendant of King David.

The Ramban then segues to the Hasmonean Dynasty. Maimonides, in his version of the story of Chanukah [Hilchot Megilla v’Chanukah 3:1], has only laudatory things to say about the Hasmoneans: “In [the era of] the Second Temple, the Greek [Seleucid] kingdom issued decrees against the Jewish people… The Jews suffered great difficulties from them, for they oppressed them greatly, until the God of our ancestors had mercy upon them, delivered them from their hand, and saved them. The sons of the Hasmoneans, the High Priests, overcame [them], slew them, and saved the Jews from their hand. They appointed a king from the priests and sovereignty returned to Israel for more than two hundred years, until the destruction of the Second Temple.” The Ramban is not nearly as upbeat: “[The Hasmoneans] were lofty pious ones: Were it not for them, the Torah and the commandments would have been forgotten. Nevertheless, they were punished a great punishment, as four of the sons of the elder Hasmonean who reigned one after the other – [in spite] of all their strength and their success – fell by the sword to the hands of their enemies.” Indeed, the Talmud in Tractate Bava Batra [3a] teaches that any person who claims to be descended from the Hasmoneans is assumed to be a slave. According to the Ramban, the Hasmoneans were punished because they usurped the monarchy that rightly belonged to the Tribe of Judah[3]. After they successfully defeated the Seleucids, they should have immediately returned the crown to a successor of King David.

All of this leaves us with a considerable problem. Some day in the future, when “Shiloh arrives”, we will have to choose a king. According to some authorities, the Israeli Prime Minister already possesses the status of king. Divine intervention aside, how will we know that the person who we are anointing hails from the Tribe of Judah? The only tribal DNA marker discovered to date concerns the Tribe of Levi[4]. The last thing we want to do is to anoint the wrong person and end up cursing him – and ourselves – for the rest of our days.

To address this problem, we must understand why Jacob chose specifically Judah for the monarchy. The answer appears clearly in the Torah. In the verse immediately preceding the “Judean King Requirement”, Jacob tells Judah [Bereishit 49:9] “From the prey, my son, you withdrew.” Rashi explains that Jacob is referring to two incidents: In the first incident the “prey” was Joseph. Joseph’s brothers decide that Joseph poses an existential threat to the nascent Jewish People and that he must be killed. Judah thinks otherwise. He believes that they should not actively slay Joseph and that it would be sufficient to send him away to Egypt. In the second incident, the “prey” is Judah’s daughter-in-law, Tamar. Through a series of unfortunate events, Judah impregnates Tamar, who was posing as a prostitute. When Tamar becomes overtly pregnant, Judah sentences her to death. After she reveals that she possesses Judah’s signet ring, his cloak, and his walking stick[5], he acknowledges paternity and marries Tamar. Jacob lauds Judah for rescuing both Joseph and Tamar.

Is there a common denominator in Judah’s actions in the two episodes? One could suggest that in both cases, Judah “did the right thing”. It would have been easy to kill Joseph, who was a helpless target and no match for his older and larger brothers. Similarly, it would have been easy for Judah to look at the signet ring, the cloak, and walking stick that Tamar held in her hands and say, “I haven’t the faintest idea who they belong to”. In both cases[6], Judah withdrew from the prey, making him worthy of the monarchy. I suggest that Judah did more than just “do the right thing”. People act differently in a crowd than they do when they are by themselves. They exhibit “Crowd Behaviour”. Individuals in a crowd lose their individuality. The crowd itself takes on emergent behaviour, behaving as an organism. Physicists use “crowd dynamics” to model vehicle and pedestrian traffic, stripping humans of free will and reducing them to automatons. Psychologists explain that crowd behaviour is heavily influenced by the loss of responsibility of the individual and the impression of universality of behaviour, both of which increase with the size of the crowd. When Joseph’s brothers choose to murder him, they do so as a group. Judah detaches himself from the crowd and tells them [Bereishit 37:28] “What is the gain if we slay our brother and cover up his blood?” Now imagine the scene as Tamar is taken to be burnt at the stake. Think of William Golding’s “Lord of the Flies” as the boys chant “Kill the Pig! Cut her throat!” Again, Judah detaches himself from the crowd, silencing them by acknowledging Tamar’s innocence and his own guilt. Judah’s ability to withdraw from the prey, to courageously separate himself from the hypnotic charisma of the crowd, is what made him – and his successors – worthy to be king. Rudyard Kipling summed this up better than I ever could:

If you can keep your head when all about you

Are losing theirs and blaming it on you…

If you can talk with crowds and keep your virtue,

Or walk with Kings – nor lose the common touch…

Yours is the Earth and everything that’s in it,

[2] G-d tells Samuel [Samuel I 8:7] “Listen to the voice of the people, according to all that they will say to you, for they have not rejected you, but they have rejected Me from reigning over them.”

[3] Rabbi Eliyahu Zinni taught us that the sin of the Hasmoneans was that they invited Rome to govern Israel (to end a family feud), an invitation that eventually led to the destruction of the second Beit HaMikdash.

[4] Geneticists theorize that all Kohanim (Priests) are descended from some “Y-Chromosomal Aaron”.

[5] Judah gave these objects as a pledge to Tamar-disguised-as-a-prostitute as he had left his wallet at home.

[6] Most commentators assert that Judah’s actions vis-à-vis Tamar were far more responsible than his actions vis-à-vis Joseph. With Tamar, he corrected the mistakes he made with Joseph: the proper alternative to murder was not selling Joseph into slavery, but, rather, returning him safely to his father.

About the Author
Ari Sacher is a Rocket Scientist, and has worked in the design and development of missiles for over thirty years. He has briefed hundreds of US Congressmen on Israeli Missile Defense, including three briefings on Capitol Hill at the invitation of House Majority Leader. Ari is a highly requested speaker, enabling even the layman to understand the "rocket science". Ari has also been a scholar in residence in numerous synagogues in the USA, Canada, UK, South Africa, and Australia. He is a riveting speaker, using his experience in the defense industry to explain the Torah in a way that is simultaneously enlightening and entertaining. Ari came on aliya from the USA in 1982. He studied at Yeshivat Kerem B’Yavneh, and then spent seven years studying at the Technion. Since 2000 he has published a weekly parasha shiur that is read around the world. Ari lives in Moreshet in the Western Galil along with his wife and eight children.
Related Topics
Related Posts
Comments 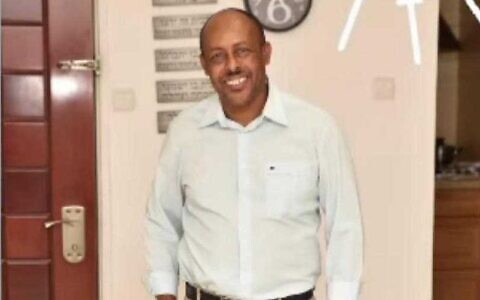