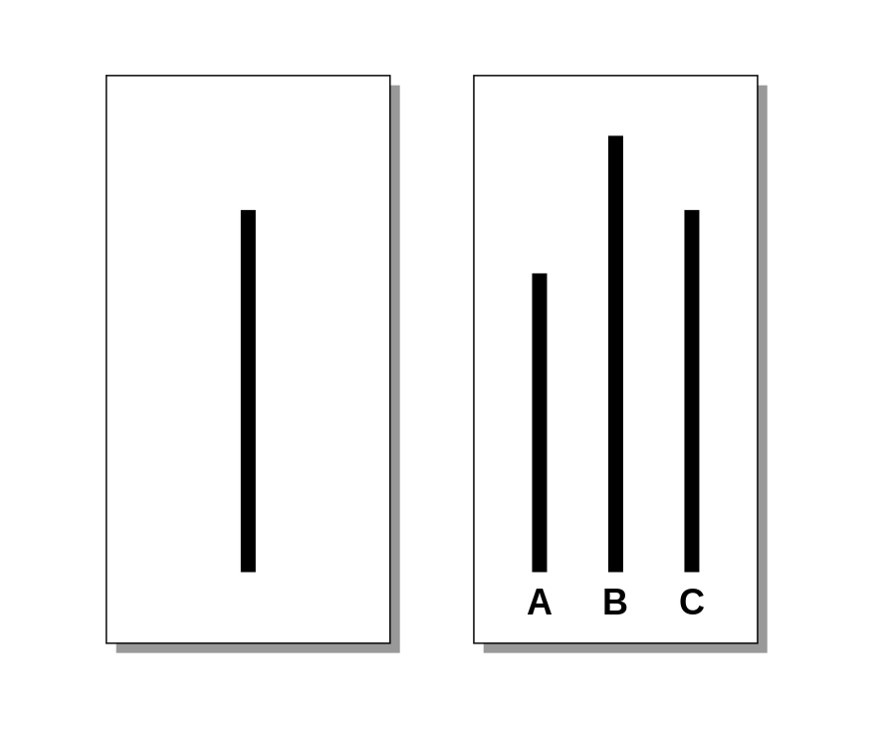 The cards used in the Asch conformity experiments. The reference card is on the left. The card on the right has the three comparison lines. (Source: Fred the Oyster via Wikimedia Commons)

In 1951, social psychologist Solomon Asch conducted a series of experiments. In this experiment, a group of eight people was presented with two images. The first image that the group was shown was a single line. The second image was three lines, one of which was the same length as the first. Participants were asked to identify which of the three lines matched the length of the first line. The lines were different enough in length that this task should have been straightforward — except that there was a catch. Seven of the people answering the question were actors, but the test subject, who gave their answer last, believed that everyone in the group was also a volunteer. The actors in the experiment always unanimously gave the same answer. Sometimes it was the right answer. Sometimes it was the wrong answer. In those trials where the actors gave the wrong answer, the test subject, questioning their own perception, overrode their instinct, and their actual perception of reality, about a third of the time, and gave the same wrong answer as their peers.

I feel for those test subjects. I can imagine their experience of looking at the images, thinking the answer is clear, and then seeing these other people, who seem like competent individuals, confidently choose the answer that seems obviously wrong. After the fourth, or fifth, or sixth person chose that same answer, I could imagine feeling confused, and possibly even questioning my own perception. I don’t know about you, but I’ve certainly had times when I have modulated a response that I had to some idea, or a movie, or a song, based on how people around me reacted to it.

In Parashat Mishpatim, the Torah recognizes the outsize influence that others can have on us. As it lists the laws it considers vital for creating a just society, it says this:

Do not side with the rabim — we’ll translate that word in a minute — to do wrong—and do not give false testimony in a dispute. Do not pervert justice in favor of the rabim.

This verse has an implied context. Some sort of crime or misdeed has been alleged, and a person with knowledge of the occurrence is about to testify. This verse is a warning to this person: Do not let yourself be influenced by rabim, whoever they are, but instead, you should share only what you know to be true.

Who are these rabim that are so prone to influence us? This word has a few meanings that are related to each other, but might suggest slightly different concerns. One meaning of the word rabim is “many.”  It’s hard to hold an unpopular opinion. If many people are talking about something that happened, you might, either intentionally or out of a sense of self-doubt, change your story. The Torah might be worried about the phenomenon that was illustrated in the Asch experiments– people might change their story when they let themselves be influenced by the people around them. This law, then, serves as a requirement to hold yourself accountable. 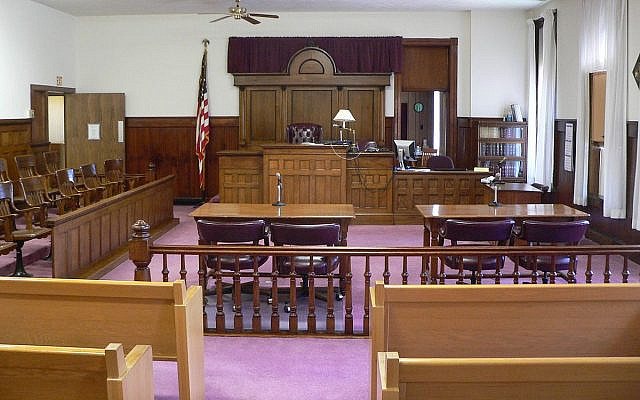 Courtroom in Nuckolls County Courthouse in Nelson, Nebraska. The Classical Revival courthouse was built in 1890, and is listed in the National Register of Historic Places. (Source: Ammodramus via Wikimedia Commons/Public Domain)

If you are testifying in court, you tell what you saw. Not what somebody else saw, or what you think you were supposed to have seen. For justice to work, you need to be honest about your own perceptions, and let the court, not you, determine what actually happened.

The medieval commentator Rashi has another concern. If you are asked to testify about a legal matter, Rashi says, it is important to offer only facts, not colored by your opinion. If you saw a person enter a room, don’t testify about what they did in that room if you didn’t see it yourself. Do not share your conclusions, but rather what you saw, which will allow the judges to determine the truth accurately. In this case, not being swayed by the many means don’t let the claims of the prosecution or the defense influence your neutral presentation.

But there’s another meaning of the word Rabim, that description for the group of people the verse warns us not to follow. Rabim means large, but it doesn’t just mean large in number. Rabim can also mean mighty, and in fact that is how it is often translated. I’ll read the translation again with that meaning:

You shall neither side with the mighty to do wrong—you shall not give perverse testimony in a dispute so as to pervert it in favor of the mighty.

It might be true that our views can be swayed by seeing that many people believe something in particular. But in the Asch experiments, people followed the crowd only about a third of the time. However, the actors in those experiments were unknown strangers. As we know, certain people can be more persuasive than others. Now, if I find a person persuasive because I know them well and they have a history of reliability, that’s one thing. But often, we find that people who are “mighty” — who have some degree of power — have more ability to sway us than others. This is why companies love hiring celebrities to help advertise their products — they know that they can generate excitement and attention, and that people, given their attraction to those celebrities, are open to being persuaded by them to make a particular purchase.

But of course, there are other ways that the power of “the mighty” can be manifest. Powerful people can use that power in manipulative ways. People may fear the personal repercussions of going against such a person, may feel reliant upon that person, or may trust the person simply because of their perceived authority.

Power doesn’t have to be wielded explicitly in order to cause harm. It is so easy for us to treat people differently because we know that they have influence of some sort, over us or others.

There are many types of power, and I think that most of them have the ability to influence people unduly. However, there’s a good argument to be made that the verse is particularly warning witnesses not to be swayed by a particular kind of influential person. What kind of person is it who is influential, who has power, in just about every society known on earth? 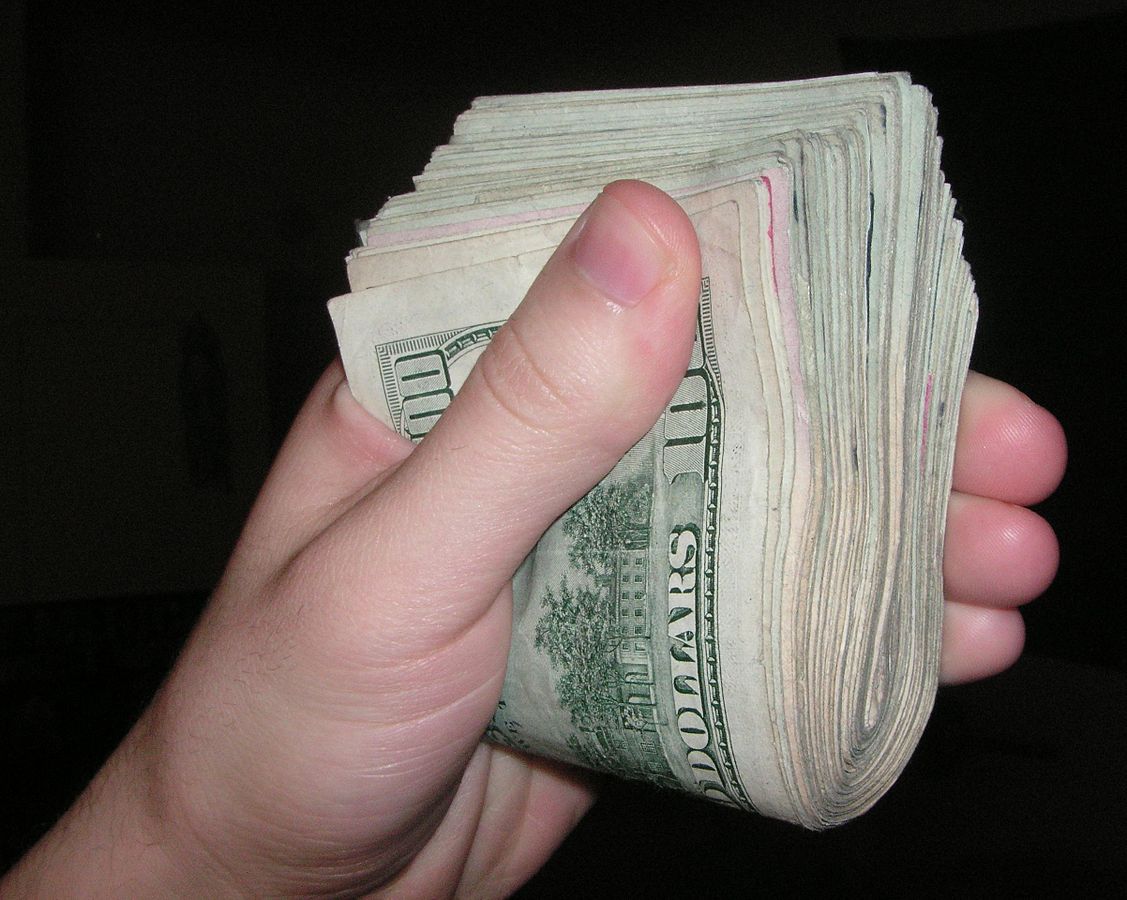 There’s support for this interpretation when we look at the following verse. After the Torah tells us not to “give perverse testimony in a dispute so as to pervert it in favor of the mighty,” it tells us: וְדָ֕ל לֹ֥א תֶהְדַּ֖ר בְּרִיבֽוֹ׃: nor shall you show deference to a poor person in their dispute. So to paraphrase that whole section: Do not be swayed by either the power of the rich OR by the sympathy evoked in you for the poor.

It’s a good reminder that money can shape the way we see people, whether they have it — or not. The impact on us isn’t just about what we can get from each other — it’s about the moral value that we may associate with having, and not having, money.

On the one hand, we may look up to those with money, and, even if we aren’t swayed by what we hope to get from them, we might see their money as a sign of intelligence, competence, foresight, and good judgement.

And on the other hand, we may hold up the poor as being worthy of respect for their perceived lack of concern for the material. They must care about what is right, we may think, and prioritize their values over personal gain. Rashi is attuned to this possibility in his explanation of this verse. He says: You shall not pay regard to this person by finding in their favour in the lawsuit, saying, “This is a poor person; I will find in their favour, and thus show them some measure of respect.” He knows that we may find poverty, not just wealth, to be worthy of respect!

In Parashat Mishpatim, the Torah calls upon us not to be swayed by money in either direction. Wealth is not determinative of character, and we are called upon to set wealth aside, and look at the facts that are relevant to any particular situation. Of course, the context of the Torah’s instruction here is very specifically the courtroom. 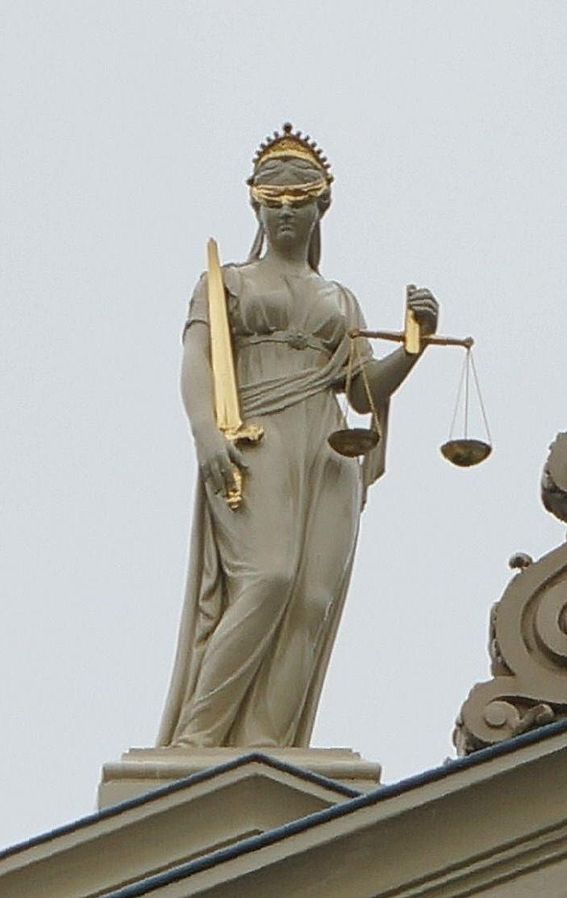 The Torah wants to make sure that we enact justice fairly, that we accurately observe and report reality, and don’t let a court judgement be swayed by a person’s financial situation.

We don’t need to look very far to recognize that this type of neutrality is easier said than done. If we weren’t so prone to this type of influence, the Torah wouldn’t have felt the need to point it out. But then again, acknowledging the problem is an important part of the solution. As we face up to our responsibilities, whether as witnesses or jurors in a courtroom, or as voters in a voting booth, we should ask ourselves: are we allowing ourselves to be influenced by others, perhaps others more powerful than we are? Or are we exercising independent judgment? I wish us all the conviction to be able to think for ourselves, and to determine, to the best of our ability, the long and the short of it.