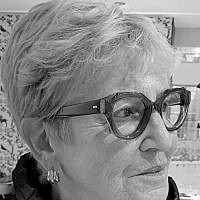 The Blogs
Brenda Yablon
Apply for a Blog
Advertisement
Please note that the posts on The Blogs are contributed by third parties. The opinions, facts and any media content in them are presented solely by the authors, and neither The Times of Israel nor its partners assume any responsibility for them. Please contact us in case of abuse. In case of abuse,
Report this post.

A couple of days ago the official Palestinian Authority daily news outlet, Al-Hayat Al Jadida reported to its readers that Israelis have now recruited cows to act as spies. According to an elder in the village of Khirbet Yanum, in order to monitor every detail “on the neck of each cow, they hang a medallion with a recording device on it and sometimes cameras.” The elder elaborated that these cows are actually recruited and trained and that he has seen it. This is the stuff cartoons are made of.

Several years ago Egyptian police arrested a duck they suspected was sent to Israel as a spy. It was reported in Al-Ahram, Egypt’s official news agency. Apparently a fisherman on the Nile River spotted a group of ducks, one of which had what he thought was a device attached to its feathers. He immediately alerted officials who expressed concern that this duck was sent by Israel for the purpose of spying. It’s hard to imagine a simple fisherman with the knowledge, technical wherewithal, and the concern to be able to reach the right authorities so quickly and efficiently.

Again in Egypt the Governor of South Sinai blamed shark attacks on tourists on the Mossad. “We must not discount the possibility that Mossad threw the sharks into the sea, in order to attack tourists who are having fun in Sharm el Sheikh.”
Turkey also reported that they believe they’d found a bird that was used by Israel for espionage purposes. According to the report, a Turkish farmer found a dead bird whose left nostril was apparently three times larger than its right nostril, leading authorities to conclude that Israel had implanted a surveillance device in its beak. Of all the dead birds in Turkey, this farmer found the one with an enlarged nostril which of course had to be the work of Israel.

Not to be outdone, Iranian officials claimed they had captured two “spy pigeons” near the uranium enrichment facility in Natanz, alleging that the pigeons were of course sent by Israel to obtain vital information on Iran’s nuclear capabilities. Iran reportedly detained about a dozen squirrels who apparently also had suspected espionage motives.

And even Saudi Arabian security forces captured a vulture with a GPS transmitter and a ring etched with the words, “Tel Aviv University.” Of course there was an immediate accusation of spying for Israel, never mind that spies are usually not so indiscreet as to wear identification tags. It turned out the bird was part of a study of endangered species which Israeli scientists were tracking. Vultures are not in the habit of respecting national borders.

These stories relentlessly circulate in Arab media as a way of frequently reminding their audiences of Israeli treachery and the danger the Israeli presence in the Middle East poses, because of Israel’s supposed intention of expanding its influence well beyond its borders. That they are not picked up by mainstream media is not due to prudent reporting, so much as it is that these stories are too preposterous to be believed and have little connection to actual facts. To report them could detract from their own credibility. So in these instances at least the global magnifying glass that is perpetually focused on Israel was set aside.

This deliberate neglect is in stark comparison to the way events in Israel are generally reported. We don’t have to look any further than Ben Gvir’s 13 minute walk on the Temple Mount. Though he violated no rules and was perfectly within his rights to do it, notwithstanding that it was seen as a provocative act, the Palestinians immediately accused him of “storming Al Aqsa.” Arab governments were quick to issue threats and warnings to Israel, and the world media rushed to condemn Israel, with the New York Times offering the opinion that his visit “highlighted the uncompromising approach to the Palestinians that has been promised by the new government.” In no time at all this became the walk heard round the world.

About the Author
I was born in Montreal and educated at the Adath Israel Hebrew Academy, McGill University (BA 1966) and the Université de Montréal (MA 1969). I taught English and French literature at the University of Cincinnati and Georgia State University. I was a journalist in radio, television, newspapers and magazines, as well as a screenwriter. For 23 I had my own business as the owner of a boutique inn in Vancouver. I retired 4 years ago and made Aliyah.