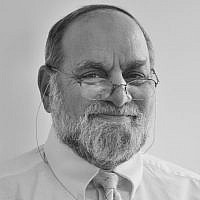 The Blogs
Phil Chernofsky
Apply for a Blog
Advertisement
Please note that the posts on The Blogs are contributed by third parties. The opinions, facts and any media content in them are presented solely by the authors, and neither The Times of Israel nor its partners assume any responsibility for them. Please contact us in case of abuse. In case of abuse,
Report this post.

Firstly, let me thank Times of Israel and its ops & blogs editor for inviting this op-ed in response to a blog post from the other day.

Secondly, let me make it clear — as is stated on page 3 of every issue of Torah Tidbits — that OU Israel and Torah Tidbits do not endorse the political or halachic positions of its editor, columnists, or advertisers…

Thirdly, the editor referred to in the previous paragraph is I, Phil Chernofsky. Aside from Sedra Stats, the Sedra Summary, Word of the Month, Towards Better Davening and Torah Reading, TTriddles, ParshaPix, and various other parts of Torah Tidbits, I write the Lead Tidbit, which is often (though not always) like an editorial or an op-ed piece.

This includes the Lead Tidbit of TT1114, Parshat Vayishlach, which was entitled HALACHA B’YADU’A… (roughly translated as, ‘IT IS A FACT OF JEWISH LIFE’) — which was the subject and focus of the blog.

I wrote that piece and I am solely responsible for its content. Neither OU Israel nor the Orthodox Union in New York approved it, or even saw it in advance of publication.

When an Arab goes on a suicide drive-by of the light rail and kills a 3 month old baby whose parents had waited an agonizing 13 years to be blessed with, then we have a manifestation of hatred of the Jewish people by an Arab.

When (as reported by the Times of Israel) 80% of the Arabs in Israel favor such ‘lone wolf attacks’, then we have an even greater manifestation of hatred of the people of Israel.

We, the Jewish People in the Land of Israel, should not have to watch every bulldozer that passes us in the street, wondering if it is going to swerve and hit us. We should not have to avoid crowded bus stops or supermarkets that serve a wide range of customers. Our children should not have nightmares or get nervous every time a siren sounds. And the list goes on and on.

So far, we are dealing with current events. But, as I attempted to point out, we have a long, long history of such anti-Jewish, anti-Israel behavior. And I’m not just referring to the history of the last number of decades. I was connecting it to the turmoil that Rivka Imeinu felt during her pregnancy with Yaakov and Eisav, to the events that followed during their lifetime, and to the behavior of Eisav’s grandson and the nation he founded — Amalek.

As I wrote in that Lead Tidbit — It is a Law (fact) of Jewish Life, that Eisav hates Yaakov.

Further in the Torah, G-d states that the threats and battles from Amalek will be with us from one generation to the next.

Eisav’s hatred and Amalek’s are not purely genealogical. The actual nation of Amalek does not exist today. I was not making a claim that today’s Arabs are Amalek. I said that their hatred of Israel and the Jews is Amalek-like in character. I was not suggesting that we attack Arabs, as they attack us. I was urging caution and diligence to the situation we are in.

I’ll repeat: The hatred that is being taught in many Arab schools, and has been taught for many years; the hatred preached in sermons in many Mosques; the call for violence and ‘days of rage’ by Arab leaders; the rockets, mortars, shootings, stabbings, hacking… even rock-throwing – all display the EISAV HATES YAAKOV scenario.

All of them? Certainly not. But way too high a percentage to ignore as fanatic extremists.

Here’s an interesting point I did not write about: Back in the days when there was a distinct Amalek nation, if an Amalekite wanted to convert to Judaism, he could be accepted — provided that he had never fought against Israel.

Non-Jews, including Arabs and Moslems are halachically welcome to live in Eretz Yisrael, provided they do so in peace and abide by the Laws of the Land. Acts of violence and hatred should not be tolerated.

I repeat — a person or people who desire to harm or kill Jews are the spiritual heirs of Eisav and Amalek.

Rather the Arabs should emulate the ancestor from whom they claim to descend. Yishmael, says our Tradition, repented his ways in his later years. Eisav and Amalek did not.

I do not incite against Arabs, cautiously, codedly, or otherwise. I do condemn the hatred and violence, not the people.

About the Author
Phil Chernofsky has been Educational Director of the OU Israel Center since his Aliya, 33 years ago. He founded and is the editor of Torah Tidbits, OU Israel's weekly Torah booklet for the last 22 years. Phil also hosts a weekly internet-radio show called Torah Tidbits Audio. He lives in Ramot Eshkol and his children and grandchildren live in Jerusalem, Modiin, and Otniel.
Comments