The UN issued a dramatic report on the climate crisis, Covid-19 is still very much with us and the occupation is still there.  But there is also another topic occupying my thoughts these days – what I call “The Messi Mess”.  For me, sports fandom is a momentary relief from life’s troubles and tribulations.  I admit that if one of “my team’s” wins or loses on any particularly night it has a (slight)impact on my mood, whether I begin the next day upbeat or not. 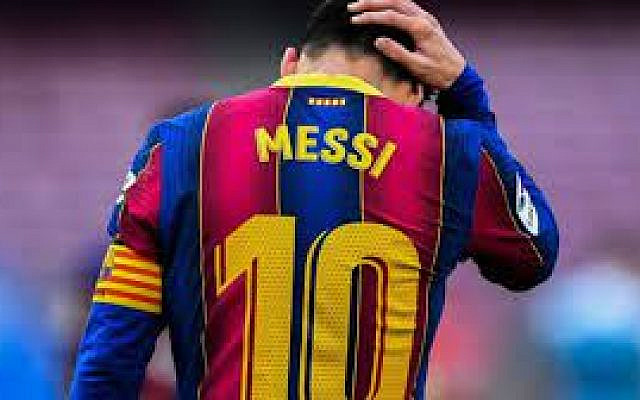 Leo Messi’s move from Barcelona to Paris Saint Germain is an emotional game changer for me, as I assume it is for many of you out there.

I actually root for 4 soccer (football) teams, Hapoel Tel Aviv here at home, Manchester United perhaps because legendary Hapoel fans Arik Einstein and Eli Mohar always put the two together, Roma because my son Adi said when we were in Rome that we can’t root for city rival Lazio since they are the club of the neo-fascists, and Barcelona, because their rival Real Madrid was Generalismo Franco’s team.

And of course, since he was 14, and particularly since he began playing for the adult team, for almost 20 years, Messi, probably the greatest player in the world today (sorry Ronaldo), has been the symbol of Barcelona.

What ever happened to team loyalty?  Totti played for Roma during his entire career.  And in a forgotten episode, my Brooklyn childhood hero Jackie Robinson chose to retire rather than be traded to the rival Giants.  Iron Man Cal Ripken played his entire career with the Baltimore Orioles, etc.

I know that the Barcelona owners were both greedy and poor managers.  But the bottom line is that Messi chose money over fan loyalty.  And I simply can’t transfer my fan loyalty to Paris Saint Germain.  The very idea of money buying up all the talent is an antithesis to what I think the ethics of sports should be.  I find it hard to digest that the Qataris can buy both the 2022 World Cup and also the best players in the world, first Neymar, and now Messi, in order to try to win the gold ring.  It’s the opposite of the principle of fair play that should guide sporting events.

So no, PSG may make a lot of money selling Messi shirts, but I’m not going to transfer my fan loyalty to them.  And I hope that they won’t win the European Championship.  If they make it to the final, I’ll be rooting for whoever makes it to the final against them, hopefully Manchester United, Barcelona, Roma (unlikely) or Hapoel Tel Aviv (one can dream).