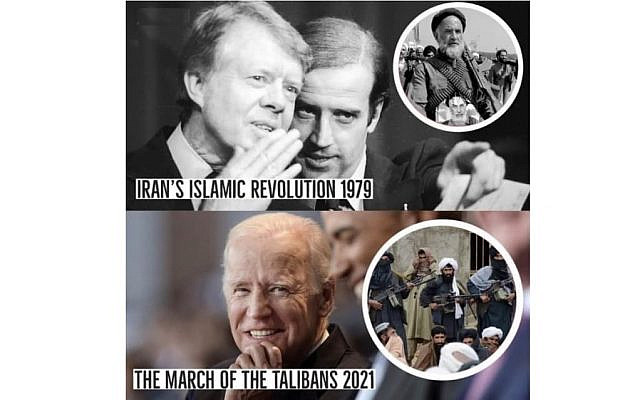 With the President Joe Biden taking the office and the silence in the face of the Islamic Republic of Iran’s provocation and, of course, Europe’s constant appeasement, diplomatic discourse in the Middle East has become a process in the service of Islamic terrorism.

The most important issue that the Biden administration’s foreign policy team has been pursuing since January 2021 is the Vienna- JCPOA talks, which are in fact crediting the anomaly of the Islamic Republic’s ideological behaviour as the godfather of terrorism, and the current US administration, despite of past failed experiences, repeating it.

Whilst, during President Trump’s presidency, when the Islamic Republic of Iran, was completely powerless, the United States intended to withdraw its forces strategically and gradually from the Middle East.

In the meantime, the ” Abraham Accords” peace treaty was concluded between the Arabs and Israel, and at the same time, with two important policies of maximum pressure and withdrawal from the Middle East, the Middle East was rapidly moving towards relative calm.

Joe Biden is now following in the footsteps of his predecessors, and the Middle East has become a hotbed of Islamists. The Democratic President of the United States, who entered the White House with the help of leftist news agencies, saved the Regime in Iran from collapse in the shortest necessary time.

On the other hand, in a rare incident, the indirect political pressure of the Biden government on Israel caused the Islamic terrorist regime to take advantage of this issue and launch more than 4,000 missiles by re-equipping the Hamas terrorist group.

Meanwhile, the left-wing Islamist representatives of the Democratic Party, in support of Palestine, confirmed the Islamic Republic’s missile attacks on Israel. At the same time, left-wing elements and Islamists took to the streets in Europe with various and specific supports and set fire to the Israeli flag in support of the terrorist group Hamas and anti-Semitism.

The public ransom paid to the Islamic Republic of Iran by left-wing socialist governments has become so widespread that this illegitimate regime has once again destabilized maritime trade, and even attacked an Israeli merchant ship in the Arabian Sea, and European and US reciprocity has failed to appease the terrorist regime.

What is tangible to the Biden government and even to European governments, is not acceptable and is a violation of Western values. This is even evident in, French President, Emmanuel Macron’s contact with Ibrahim Raisi, the “judge of death”, whose hand is stained with Iranian blood. France, once ruled by de Gaulle and known as a model of freedom and democracy in the world, is now so politically and morally degraded that France has become a hotbed of anti-Semitism and Islamism.

Today, diplomacy has become a catastrophic term in the Middle East, and in fact the discourse of Western left-wing politicians is in support of terrorism, effectively using it to authenticate human rights violators and Islamist reactionaries.

The fact is that wherever there is talk of diplomacy with the Islamic Republic of Iran and other armed terrorist groups, it must be concluded that an inhumane event or catastrophe will take place in the Middle East.

The use of the word diplomacy by politicians, especially leftists in the West, has been practically intended to further suppress the Iranian people and put pressure on Israel and the Middle East. This has become quite clear to those who are aware of political issues during these years.

Islamic terrorism, led by the Islamic Republic of Iran, since the Islamic Revolution in Iran, usually has good relations with appeasing politicians, and the word diplomacy with the ruling mullahs of Iran is just for economic transactions and ignoring the will of the people.

Forty-two years ago, the Western left, led by the American Democrats, overthrew Iran’s regime and the entire Middle East under the banner of so called “human rights”!!?? After that, with the theory of global market policy and trade, they prescribed peace and democracy for the Middle East, which resulted in fundamentalism and strengthening of the foundations of state terrorism. This in turn led to the growth of other terrorist groups under the shadow of criminal rule in Iran.

The existence and continuity of the terrorist regime of the Islamic Republic of Iran, means that global trade and market policy, trade and human rights documents, will not give rise to peace and democracy.   What the evidence to date shows is that globalism in the Middle East has brought nothing but corruption, war, terrorism, and anti-Semitism, and this is the result of an economic view of politics.

The result of the left-wing globalist discourse was not what was said in the slogans, but nothing but corruption and war. The stubbornness of these politicians sacrifices the will of the people in the guise of peace and democracy, but in practice has resulted in nothing but deprivation of security and civil war in the Middle East.

The stubbornness of left-wing globalist politicians who want to impose market and trade policies under the guise of peace and democracy without considering the will of the people, resulted in repeated failures, like the Islamic insurgency in Iran and what they have done in Afghanistan; It will only result in deprivation of safety and civil war in the Middle East.

The process that Jimmy Carter started, and now led by Joe Biden and backed by the Europeans, is the delivery of the Middle East to dictatorial regimes and their paramilitary partners. If the Taliban was established in Afghanistan during the Bill Clinton era, today Joe Biden and his associates spreading the red carpet for the Taliban to establish the “Islamic Emirate” alongside the Islamic Republic of Iran.

The Islamic Republic of Iran is rooted everywhere in as the godfather of terrorism during these years and is the only cause of violence, war and tension in the region. The fact that the Taliban may not succeed in Afghanistan, it will take forty years to catch up with their terrorist predecessors in Tehran.

The flood of Afghan refugees is now a nightmare for European officials, as thousands of Syrian and Iraqi refugees flocked to Europe in 2015. A large number of Islamic terrorists fled to Europe under the guise of refugees, and now history seems to be repeating itself.

Moreover, the situation of the Taliban will be more complicated than in Iraq. One of the major concerns of the United States and its allies is the capture of military equipment in Afghanistan by the Iranian regime and its allies in the region. The reports indicate that Revolutionary Guards intermediaries have gone to Afghanistan for this purpose. China and Russia ‘s access to modern US military equipment and technology remaining in Afghanistan will certainly be a serious challenge for Washington leaders. Overcoming this crisis requires an international dialogue, but the problem is that US foreign policy in the Biden administration does not have a clear framework and is practically confused and has basically nothing to offer.