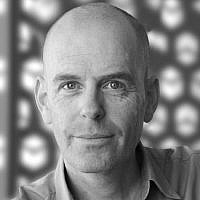 The Blogs
Alon Friedman
Apply for a Blog
Advertisement
Please note that the posts on The Blogs are contributed by third parties. The opinions, facts and any media content in them are presented solely by the authors, and neither The Times of Israel nor its partners assume any responsibility for them. Please contact us in case of abuse. In case of abuse,
Report this post.

The near-total shutdown of Israel-Diaspora immersive and exchange programs has exposed a dangerous vulnerability in our global Jewish educational ecosystem. But the good news is that virtual mifgashim (encounters) can fill a vacuum and create new opportunities.

My organization, Enter: The Jewish Peoplehood Alliance, built a pilot program that matches Israeli and Diaspora young people for a weeks-long series of curated conversations. Our 21st-century twist on “pen pals” not only defied pandemic travel disruptions, but it knits together Israel’s national effort to improve English studies and the current boom in Jewish peoplehood initiatives that is reshaping Israel-Diaspora touchpoints.

Cross-cultural, people-to-people encounters are one of the most powerful tools for nurturing Jewish peoplehood, but they have yet to be introduced in virtual formats on a mass scale. As I wrote, together with Jeff Solomon, in eJP early in the pandemic, there is no reason why young people from the Diaspora and Israel cannot be paired online within a framework that strengthens their Jewish literacy while at the same time nourishes their personal and professional interests.

This past winter, Enter’s initial pilot paired more than 600 high schoolers from Israel, North America and the U.K. The mifgashim were conducted in English, on Sundays, and as part of a series that combined a “big ideas” peoplehood curriculum with a framework that deepened peer-to-peer ties. We chose weeks on the calendar when Israel-Diaspora touchpoints are at their lowest ebb. This year, through an expanded partnership with Israel’s Ministry of Education and RootOne, we are aiming for a five-fold increase that brings together 3,000 high school students from Israel and North America.

One2One is designed to provide Israelis with opportunities to improve applied English skills, an area Israel lags well behind its OECD peers. The Israeli business journal TheMarker recently reported that Israeli hi-tech companies are starved for local employees and often have to turn to overseas hiring. This has allowed our program to tap into two national priorities: strengthening Jewish identity and global Jewish solidarity, and breaking the “glass ceiling” on English, thus increasing Israeli competitiveness.

An overwhelming majority of participants reported enjoying their One2One meetings. Our outside evaluation found that more than 80% said they would do it again, and a large majority said they found the encounters meaningful. Nearly 60 percent of Diaspora teens said they began to pay more attention to news about Israel. Seventy-six percent of Israelis said the exchanges helped them improve their English and gave them greater motivation and confidence. A whopping 94% identified improved English skills as an important personal goal.

Eighty-seven percent of Diaspora teens considered it “positive” that the program empowered them to manage the dialogue on their own, without adults. A majority of participants were hooked, so much so that they stayed in their video meetings well beyond the allotted time, interacted with one another between meetings, and said they look forward to future contact.

The vast majority report that the encounters improved their knowledge of and appreciation for Jewish life in their partner’s country.

The ripple effects are also deeply encouraging. Israeli teachers not only view the program as enabling success in English studies, but they are also being exposed to the Jewish peoplehood paradigm, which is still novel and emerging in the Jewish state. Other ripple effects include piquing Diaspora participants’ interest in future Jewish engagement opportunities. For example, seventy-six percent of the non-Israelis said the program increased their interest in studying Hebrew.

We learned that when having one-on-one conversations, Jewish teens do not have “Zoom fatigue,” as some skeptics suggest. When offered a chance for an in-person peer-based international exchange experience that expands their horizons, sharpens practical skills and strengthens their identity, teens want to join, and they are fully engaged.

On the Diaspora side, our entry survey reflected intense curiosity, perhaps given that this demographic overwhelmingly anticipates future travel to Israel.

We also learned that by focusing on English, One2One provides a compelling incentive for Israelis that dovetails with greater connectivity with the Jewish world. There is increasing evidence, as documented by researchers like Len Saxe and Ezra Kopelowitz, that this type of connectivity builds awareness and increases appreciation for Jewish diversity and pluralism.

The interactive, individualized and independent nature of these encounters all turned out to be elements that appeal to today’s young people.

There are virtually no barriers to entry. The pandemic revealed that the telecommunications revolution has finally reached a tipping point. Jews worldwide have near-universal access to handheld devices, computers and broadband.

This type of encounter is also economical. The cost is a fraction of in-person mifgashim, which typically occur during summer programs that can cost anywhere from $3500 to $7000. Unlike in-person encounters, virtual mifgashim are easily scalable, with only marginal added costs.

Moreover, and critically, programs like One2One also inject a degree of reciprocity and mutuality that has been absent from encounter experiences. A recent study from Israel’s Sapir Center documented that 80% of encounter programs primarily serve Diasporans.

A suite of touchpoints

Virtual mifgashim cannot and should not replace in-person immersive programs, though they could serve as a critical stand-by should we face another shut-down of travel. Over the long-term, online mifgashim need to be nurtured and developed so that World Jewry can rely on a broader suite of touchpoints to keep Jewish communities connected, especially young people.

Already, even well before the pandemic, the success of programs like Birthright revealed that cost and recruitment barriers still left big segments of the Jewish world without an outlet to build meaningful connections “across the sea,” to say nothing of the pre- and post-trip advantages that virtual encounters can bring to established immersive experiences.

The first experiments in virtual mifgashim were clunky. Participants had to be in fixed locations, costs were high, and quality was poor. Today, we all hold in our hands a new outlet for deepening bonds across the Jewish world. Still, increased connectivity won’t happen on its own. Recruitment frameworks and incentive structures must be built, and content must adapt to the parallel realities of life in different Jewish societies.

Due to the pandemic, we feel a special sense of urgency to leverage a crisis in ways that strengthen literacy and increase awareness. The One2One experiment, and others like it being piloted by youth movements, foundations and twin community platforms, all suggest that conditions are ripe for greater collective investment in virtual encounters.

The more connected we are, the closer we will come to realizing our common destiny and the better able we will be to navigate whatever challenges lie ahead.

Alon Friedman is the Founding CEO of Enter: The Jewish Peoplehood Alliance. alon@enterpeoplehood.org

About the Author
Alon Friedman is the Founding CEO of Enter: The Jewish Peoplehood Alliance.
Comments