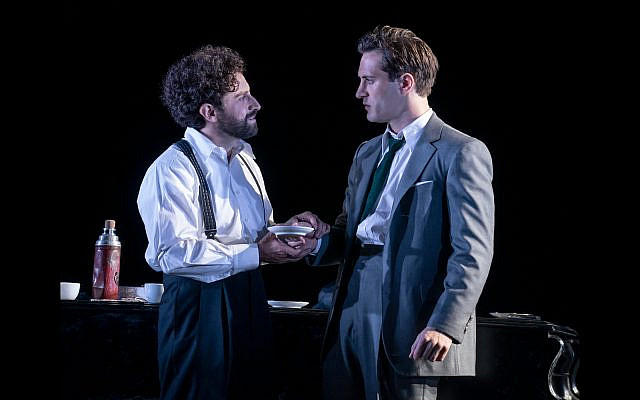 Brandon Uranowitz, left, as Nathan, and Arty Froushan as Leo. The latter character is a stand-in for Stoppard. (Joan Marcus)

JTA — Tom Stoppard is one of those playwrights who flatters you with his erudition. His 1993 play “Arcadia” dives deeply into the mathematics of algorithms and fractals. His breakthrough 1966 play, “Rosencrantz and Guildenstern Are Dead,” is a graduate school-level midrash — an alternate telling — of “Hamlet.” You leave the theater feeling smarter, and maybe just a touch self-satisfied, for just having kept up with the dialogue.

It helps that Stoppard has always seemed to thoroughly absorb his interests in science, politics and literature before transposing them into drama and comedy. The characters seem to inhabit the worlds they are recreating onstage, rather than declaiming from a playwright’s overstuffed research files.

That’s why I was so disappointed with his latest play, “Leopoldstadt,” which opened on Broadway earlier this month. It’s an epically scaled play about the Holocaust, centering on multiple generations of a prosperous assimilated Viennese Jewish family. As staged by the playwright and director Patrick Marber, it is never dull, but rarely compelling. As Austria becomes increasingly inhospitable to its Jews, characters debate Zionism, Freudianism, the price of assimilation and the persistence of antisemitism in the style of an earnest high school textbook. From the fin-de-siècle opening act to the final reveal about the unspeakable fate of most of the characters, it felt less like a play than a pageant — professional, effective, well-meaning — staged for a Holocaust museum.

It feels churlish to insist that a play about the Holocaust do more to move or engage me. And yet the most memorable and justifiable works of what we inadequately call Holocaust art — Anne Frank’s diary, Art Spiegelman’s “Maus,” the exquisite 1983 Hungarian film “The Revolt of Job” — bear witness by transforming an inhuman era and unimaginable tragedy into something deeply specific and personal. Such specificity is the answer to philosopher Theodor Adorno’s famous dictat, “To write poetry after Auschwitz is barbaric.” It is also the opposite of what the New Yorker dance critic Arlene Croce once derided as “victim art” – that is, works that seem to exploit tragedy to make themselves critic-proof.

Stoppard’s play is not exploitative, but intelligent and sincere. I understand why critics and audiences have found it moving, “brilliant,” “beautiful” and “prescient.” But I do feel what power it has relies on a story we know all too well — the very worst story in the history of the Jews — and not on the specificity of its characters or ideas.

In the recent Ken Burns’ documentary “The U.S. and the Holocaust,” writer Daniel Mendelsohn discusses growing up in America and how little he heard about relatives who perished in Europe. “We had pictures of them. And on the back of every picture, my grandfather always wrote, ‘Uncle Shmiel, killed by the Nazis,’ or ‘Aunt Esther, killed by the Nazis.’ And I always wondered, why are there no stories about these people?”

To his great credit, Stoppard set out to tell such stories. Stoppard, who is 85, famously discovered, or at least took seriously, his Jewish ancestry only late in life. Long considered a quintessentially British writer, he is in fact the son of Jewish refugees who fled Czechoslovakia for Singapore in the 1930s. His father, whom he never knew, was lost at sea and his mother married a British Army major named Kenneth Stoppard. As Stoppard’s biographer, Hermione Lee, explains, his mother “never told her sons, either that she was Jewish or that most of her family had perished in the Holocaust. They would find out, very much later.”

“Leopoldstadt” is a portrait — in essence, a resurrection — of an extended family like his own. That so many of the more than 30 characters on stage feel so generic is a pity.

It is also a pity that the most compelling and particular story Stoppard has to tell — what it means to reclaim a Jewish identity that had been hidden behind a defensive moat of Englishness — is consigned to the all-too-brief final act of “Leopoldstadt.” The scene includes a callow British writer not unlike a young Stoppard, who is told by a cousin who survived the camps, “You live as if without history, as if you throw no shadow behind you.”

I can only imagine the Stoppard play it would have been had he centered his and his mother’s story: a son confronting his family’s hidden, tragic past; the costs and opportunities of eradicating one’s roots; the responsibility that comes with knowing, the guilt of surviving because of an accident of history and geography

Those are deeply American Jewish concerns as well. Most American Jews did not by any means repudiate their Judaism during World War II, but, as historian Lucy S. Dawidowicz wrote, “The Jews who survived Auschwitz, Belsen and Maidanek were stunned by the normalcy of the world to which they returned. They soon noted that American Jews — notwithstanding those who had served in the armed forces — had lived through the war years in safety, without having made great sacrifices. It rankled the survivors that American Jews had not staked their own security to save the European Jews.”

That is a serious charge, worth debating. It is in part the subject of Burns’ film. Their responses to the Holocaust shape American Jews’ attitudes toward Israel, toward their Jewish identities and toward their politics, especially when it comes to immigration.

Perhaps there can never be too many primers on the Holocaust, no matter the medium. And it’s possible that American theatergoers 80 years after Auschwitz have only a passing knowledge of the Holocaust; there’s research to suggest they might.

But a different play could have helped all of us, especially the children and grandchildren of American Jews who lived through the Holocaust and of those families that barely survived, to confront the shadows thrown by the past.

About the Author
Andrew Silow-Carroll (@SilowCarroll) is the editor in chief of The New York Jewish Week and senior editor of the Jewish Telegraphic Agency.