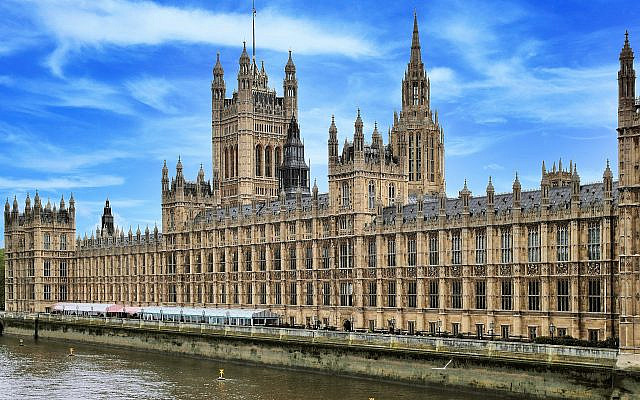 Houses of Parliament. (Andrew Buchanan on Unsplash via Jewish News)

I still remember the battered leather satchel from which he removed Volume 373 No. 42. A retired professor, back in the great halls within which he was still revered, had come to meet 20-year old me, advise me on a 9/11 debate I was organising, and give me a copy of the Official Report from the House of Commons Parliamentary Debates (Hansard) on 1 November 2001. I remember reading it cover to cover, knowing full well the moment it represented. The other day I found it.

Other things were discussed that day, but all anyone cared about was the debate on war in Afghanistan. The bombing had started. Tony Blair’s defence secretary Geoffrey Hoon had been in the US a day earlier meeting his counterpart, the uber hawk Donald Rumsfeld, offering him air-to-air refuelling, Tomahawk cruise missiles, surveillance flights and the British airbase at Diego Garcia.

What, I wondered, did the war in Afghanistan have to do with Israel? The Israel Defense Forces wasn’t involved. The bombers weren’t based at Ben-Gurion. Scuds weren’t expected in Tel Aviv. Yes, the second intifada was underway, Benjamin Netanyahu (then working in the private sector) had spoken to several MPs the day before, and Blair was in Israel meeting (then prime minister) Ariel Sharon as the debate unfolded, but none of that explained why speaker after speaker stood up to talk about the Jewish state, a mere 3,000km from Afghanistan.

The late Gerald Kaufman gave it a go. “Whatever the outrage, everything comes back to the existence of Israel,” he said. Yet the west’s enemies were hypocrites. “Bin Laden does not care one jot for the Palestinians, nor does Saddam, nor do the Syrians…. What these extremists do, is exploit the plight of the Palestinians as a cause round which they can rally – some sincerely, some certainly not.”

Others followed, albeit less deftly. Denzil Davies said the Israeli-Palestinian conflict was “a powerful recruiting sergeant for the foot soldiers of terrorism”. Tom Clarke said it was “really at the heart of a solution” to terrorism. Roger Godsiff said Palestinian grievances would “continue to fester and be a breeding ground for terrorists who use them to carry out atrocities like 9/11”. John Horam said “hatred of America has been driven by its support for Israel…”

Some saw opportunities. Anne Campbell said: “America now has the moral high ground and can bring pressure to bear on the Israelis,” while others served warnings.

The Lib Dems’ Menzies Campbell, who later led the party, said Israeli-Palestinian peace “cannot be postponed… It must be commenced now and operate in parallel with the military action in Afghanistan. No diplomatic task is more urgent for sustaining the coalition.” He also felt settlements undermined the war effort.

For the most part, the arguments did not seem to stack up. Terrorists and their state sponsors all hate Israel so they send Saudi jihadists to fly planes at US buildings? Solve Israel-Palestine and they’ll stop? Nonsense. Louise Ellman called it out at the time. “Many Members have suggested the dispute between Israel and the Palestinians is at the heart of the conflict. It is not.” Likewise, Jim Murphy described it as “a phoney connection”. Campbell seemed wrong too – Turkey, a Muslim nation supportive of the Palestinians, had  just committed troops to the US effort.

I found the reread fascinating, surprising, amusing, informative and enlightening, in part because today’s mood music is so different.

Few would have imagined then that, 19 years later, Israel would have peace deals with Bahrain and the United Arab Emirates not with the Palestinians, and that vanishingly few mainstream British voices accuse it of stoking global terrorism as a result.

Now back in its box (unlike international terrorism), I plan to reread it in 19 years’ time  to see if it or I have aged worse.