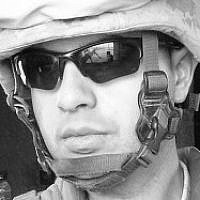 The Blogs
David Morgenstern
Apply for a Blog
Advertisement
Please note that the posts on The Blogs are contributed by third parties. The opinions, facts and any media content in them are presented solely by the authors, and neither The Times of Israel nor its partners assume any responsibility for them. Please contact us in case of abuse. In case of abuse,
Report this post.

The Prime Minister of Israel calls it “the cruelest, most grotesque war that I’ve ever seen.” Former U.S. President Bill Clinton observes that Hamas “has a strategy designed to force Israelis to kill their own [Palestinian] civilians.” Canadian Prime Minister Stephen Harper says that “it is evident that Hamas is deliberately using human shields.”

All murder and terror is vile. But for the last sixteen years, Hamas has been the world’s premier trailblazer into the depths of human moral depravity. Their actions intentionally exploit the humanity of their adversaries and seek to maximize casualties on their own side in order to manipulate world – and Palestinian – opinion.

They persist because it works. For it to end, the world must hold Hamas accountable for its victimization of its own – and the Israeli – people.

In the early 2000’s, Hamas made suicide bombing mainstream. In the 1980’s there was an average of 5 suicide bombings per year, globally. At the height of the Second Intifada, Hamas, along with other Palestinian terror groups, had brought that number up to 90 per year – not counting hundreds of thwarted attacks. For the first time in human history, women and children were regularly sent to commit suicidal homicide.

As in previous rounds of violence, Hamas today continues to push the envelope of human maliciousness. It not only fires rockets from densely populated civilian neighborhoods and from hospitals, it then prohibits the residents from seeking safety when Israel warns – sometimes days in advance – of an impending military operation in response to the rocket attacks.

Hamas has been caught transporting gunmen in ambulances (and again) and hiding rockets under schools and inside mosques. It opens fire from civilian buildings, drawing return fire that endangers innocent bystanders. It employs human shields, including children, not only to protect military assets but explicitly to shield its fighters from incoming fire. It requests brief humanitarian cease-fires, ostensibly to allow injured Palestinians to seek treatment, but does not actually cease firing.

These actions – each one a war crime under the Geneva Convention – are designed not only to facilitate Hamas’ terror war against Israel but also to maximize the number of Palestinian civilians killed by Israel.

This is difficult for many observers to accept. Well-intentioned people see the wretchedness of the Palestinians and the might and prosperity of the Israelis and instinctively blame the latter for the plight of the former. Surely some monstrous Israeli evil must have driven Gaza’s militants to such extremes. But it is not so simple, and the well-intentioned have an obligation to confront the evidence and avoid being manipulated by Hamas.

For at least fifteen years – essentially a generation – Hamas has employed its school curriculum, summer camps and TV programming to indoctrinate little children into a culture of hatred, murder and death.  (If you click on no other links in this article, click on those three.  Watch the last video to the end.) This is so anathema to most of humanity that even describing it sounds like exaggeration and propaganda.

But it is not. We have seen the indoctrination of large populations in Nazi Germany and Communist North Korea, among other places. We have seen hatred take root in a society. It is happening in Gaza (and not only there) as we speak, and it is ensuring that peace is at least a generation away. Hate is the root cause of the conflict today.

Undeniably, Israel’s record is far from unblemished. Israeli soldiers have been convicted of using Palestinians as human shields (illegal according to the Israeli Supreme Court). Israel’s policy of demolishing the homes of terrorists, while evidence of its desperate search for terror deterrents, is a form of collective punishment that is legally unjustifiable and must be abandoned. Though Jews should be able to live freely anywhere in the world, the sad fact is that the expansion of Jewish communities in the West Bank is often counter-productive to the prospect of peace, which Israel claims is its ultimate goal.

Still, Israel does more for the Palestinian people than anyone else, including their own leadership. Ismail Haniyeh, Hamas’ leader in Gaza, sent his own one-year-old granddaughter to an Israeli hospital last year. Israel, of course, treated her, and she returned unharmed to her family, unlike many of her grandfather’s Palestinian and Israeli victims. In recent days the IDF has set up a field hospital on the Gaza border expressly to treat injured Palestinians. Far from seeking to starve the people of Gaza, Israel continues to send them tons of food, medicine and fuel, even as the violence rages on.

Hamas counts on Israel’s humanity. Israel has the capacity to destroy many of Hamas’ tunnels and underground munitions stores from the air. But when these are located under civilian population centers – as they frequently and intentionally are – the Israeli people send in their sons, husbands and fathers on the ground instead. Hamas is sending them back in body bags by the dozen. Yet Israel keeps sacrificing its tactical surprise, its military advantages and its young soldiers in order to minimize the suffering it is forced to inflict on noncombatants in Gaza.

The reality of Hamas’ ruthless exploitation of its own people and of its enemy’s morality has concrete implications. The only way to alleviate Palestinian suffering and create the conditions for peace is to hold Hamas – not Israel – responsible for the fate of its people.

Holding Hamas responsible means not returning rockets to them, as the U.N. has apparently done twice this week after finding them hidden in its schools. It means pursuing their leaders and trying them for war crimes under the Geneva Convention and for child abuse under the Convention on the Rights of the Child. It means taking every possible step to free the people of Gaza from Hamas’ fanatical rule, even over the objections of its many Palestinian supporters.

Most of all, it means getting out of the way when Israel takes on the burden of destroying Hamas’ rockets, its terror tunnels, its gunmen and suicide bombers and whatever new horror it conceives of next. It means not calling on Israel to immediately and unconditionally cease fire, as U.N. Secretary General Ban Ki-moon and others have done. A premature end to Israel’s Operation Protective Edge will likely save some Palestinian and Israeli lives now, but at the cost of many more on both sides in the near future.  (And this I write with a lump in my throat, as my own little brother stands guard with his infantry unit on the Gaza border.  Selfishly, I want nothing more than an immediate end to the fighting.)

It means not applying heavy, public pressure on Israel to minimize civilian casualties. This pressure is unnecessary since it is already central to IDF doctrine, and it sends the wrong message to Hamas and the rest of the world. It means not imperiling the Israeli economy by cancelling all flights to Israel after a single rocket lands a mile from Ben Gurion airport, as the U.S. and others have done. If the airport remains safe enough for El Al, the most paranoid airline on earth, it’s safe enough for everyone else.

The U.S. is doing much already to support Israel. It affirms Israel’s right to self-defense and has provided additional funding for the life-saving Iron Dome missile defense system. Notable Americans on the left and the right have voiced their support for Israel and condemnation of Hamas. But there are other ways the U.S. can be helpful.

On Sunday, seven Israeli soldiers were killed when their armored personnel carrier was hit by an anti-tank missile. The APC was a lightly armored, Vietnam-era M113. Israel has developed a much more robust troop carrier, the Namer, but can’t afford as many as it needs.

As the U.S. withdraws from Afghanistan and Iraq, thousands of heavily armored MRAPs – Mine-Resistant Ambush Protected vehicles – are being decommissioned. Hundreds have been donated to local law enforcement around the country. The Pentagon could consider donating some MRAPs to Israel as well.

Israel has developed a highly effective active defense against anti-armor threats including RPGs, but so far has only been able to install the expensive system, known as Trophy, on the Merkava (tank) and Namer platforms. Trophy has already saved lives, but could have saved more were it more widely deployed.  The U.S. could assist Israel financially in this regard, or even purchase the system itself so as to protect American troops and bring down per-unit production costs for the Israelis.

The U.S. also has forward-positioned equipment and ordnance in many allied countries, including $1.2 billion worth in Israel. Israel is permitted, with American approval, to use this stockpile in an emergency, as it did in the Lebanon War in 2006. There have been no reports that Israel is currently exercising this option, however if urgently-needed supplies – such as body armor or precision munitions – can be found there, the U.S. should consider granting Israel this authorization.

These actions and others would serve Palestinian civilians as much as Israelis. As twisted and ironic as it may seem to some while Palestinians are dying under Israeli bombs, supporting the Palestinian people and supporting peace means supporting Israel against Hamas. It’s not really that complicated, and the evidence is overwhelming.

In the long, miserable history of the Arab-Israeli conflict, no one has ever said it better than the late Golda Meir, Israel’s fourth Prime Minister:

To which Hamas has responded, “We desire death like you desire life.”

In this most grotesque of wars, the West must decide whose side it is on, and act accordingly.