In November 2004, Shimon Peres came to Boston to promote the idea he cared about more than anything: peace.

At 81, he was spearheading an initiative aimed at fostering better relations between Israel and an Arab world that has forever been implacably hostile to it. Ever the stubborn optimist, ever the dogged seeker of peace, Peres, who served twice as Israel’s prime minister, twice as its interim prime minister, and 12 times as a member of its Cabinet, already had a lifetime of service to his people that extended back even before Israel’s founding.

Ageless in his ninth decade, Peres had formed the Peres Center for Peace to conceive and nurture programs that brought Israelis and Arabs together in health care, sports, the arts and business. His idea was that, even with the violence and bitterness all around, creating partnerships between both peoples could build an infrastructure for the two-state solution that he believed in so passionately, and that he wanted everyone, including cynics on both sides, to believe in as well.

As Peres arrived at a downtown Boston office at 7:30 a.m. to address 150 civic leaders gathered to hear him, an aide rushed up to tell me that there was a “grave problem.”

“What’s the problem?” I asked. She explained that Peres had various health issues that required him to eat breakfast before he spoke. “Well, he’s come to the right place,” I said. “This is a breakfast meeting.”

“You don’t understand,” she admonished me. “The prime minister feels that it would be rude to keep people waiting while he eats. So he refuses to eat. You’ve got to do something.”

Wondering why it was, precisely, that I was the one who had to do something, I asked Peres if he was, indeed, refusing to eat out of politeness. He confirmed it. I decided to invoke The Big Gun. I said that if he persisted in his stubbornness, I would call my mother, she would call him, and he would not be happy with what she would say about him not eating breakfast. 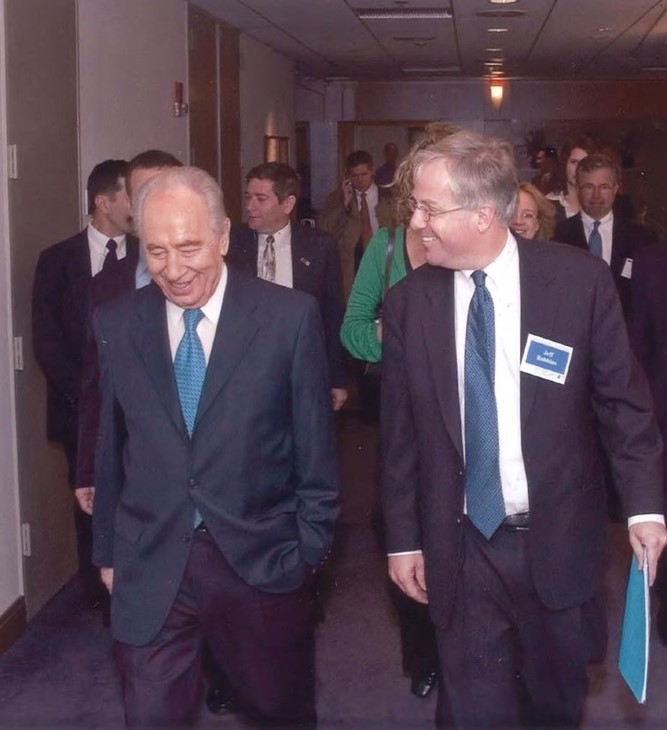 With Peres, now 93, fighting for his life in an Israeli hospital, it isn’t only his countrymen who honor his life and pray for his recovery. It is numberless citizens of the world who, whatever their politics, know greatness when they see it, and saw it in him.

Jeffrey Robbins, a former United States delegate to the U.N. Human Rights Council, is an attorney in Boston. This article was originally published in The Boston Herald.