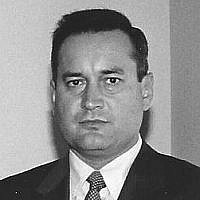 The Blogs
Fernando Alvarez
Apply for a Blog
Advertisement
Please note that the posts on The Blogs are contributed by third parties. The opinions, facts and any media content in them are presented solely by the authors, and neither The Times of Israel nor its partners assume any responsibility for them. Please contact us in case of abuse. In case of abuse,
Report this post.

Telling fiction stories is the ordinary way through which human beings influence on each other. Back in the IX century, Sherezade got to a point to defeat a serial killer, sultan Shariar,  just by using fiction, redeeming him from his madness and saving herself. Later in XXth century another writing genius, Benjamín Murmelstein, The Jewish Council president at Theresienstadt  camp who, by creating stories during years, talked Heydrich into preserving alive a Jewish colony in the core of Nazy Germany

Tales and stories are pretty much more powerful than ideas, and human beings use to believe what they are told as long as those who narrate the story perform in a confident and outgoing fashion such as the one parents use to tell tales to their children. Sherezade, the One Thousand and One Nights’ muse saved herself with her stories and eventually became the infamous pioneer or other muses as Eva Braun, Clara Petacci o Leni Riefenstahl. In the other hand, Murmelstein’s narrative virtuosism saved his life but condemned him to walk errantly without being able to meet Israel lands ever.

Parenting is something that usually goes beyond the reasoning of the individuals, however it is a success of the species. Parents all around the world use profusely the rotten tales of Sherezade or Grimm Brothers to tame their offprings in a profesional way about the idea that life is coherent and absent of ambiguity. Except from the Sor Roxana Rodriguez and her son Francisco, the most of biographies on fathers and mothers in the world are uninteresting, anyway, there is a globalized market of children tales used massively by parents. It helps to reduce the narrative wearing of them.

As we learn on the knowledge of human brain it looks every time clearer that it refers to a group of rivals disputing the final result, our behavior. David Eagleman even compares human brain to western democracies, which are composed by several undercovered experts and defend different opinions (for the behavior). The default activity of the human brain, without other task in sight, is our storytelling addressed to ourselves, the stories try to create a sensation of personal identity and give an exaggerated coherence to a chain of superficial and arbitrary manipulated behaviors which form our daily tasks.

We are beings who border with the world contained in a membrane: the skin. The main mission of our control organ, the brain, is survival. As life in a group brings a lot of advantages, human brains have evolved to take maximum advantage from the group avoiding to be spelled because of dumping: our life is the one of a tightrope walker who balances in the circus rope. We are ruled by a “team of rivals” called brain who needs other brains to survive being those also tightroping. The stories we tell while tightroping have the goal to bring coherence to our “team of rivals” and dress with coherence our ambiguous love/hate relations with our neighbors in the circus

It seems that the department of propaganda is located in the brain’s left hemisphere and its way to produce stories is frequently facistish, not very different from that methodology employed by Joseph Goebbels and his henchmen. This shouldn’t be surprising, Hansel  and Grethel would eventually deserve to be judged in the International Criminal Court and the cheesy orphan Cinderella would deserve a slit eyes yellow father with micro penis such as Cecil Chao Sze-Tsung.

The default answer of the brain is sincerity, but sincerity as a norm makes unviable any social association as family, monogamy, the Corporation or the Sunday mass. This is the reason why human evolution, different from other animals, developed the language. Then with it, the life in a group is allowed. With words as their purest demonstration: the stories, we can lie and thus survive to our equals by getting the best from the others and giving the least from us. This is when we understand Salman Rushdie statement: words are the most powerful drug invented by humanity.

About the Author
Sociologist of university education; public Employee of the Kingdom of Spain, in the area of public finance; ten year chairman of the Israel Association of Solidarity Spain; regular contributor in the economic press Spain.
Comments