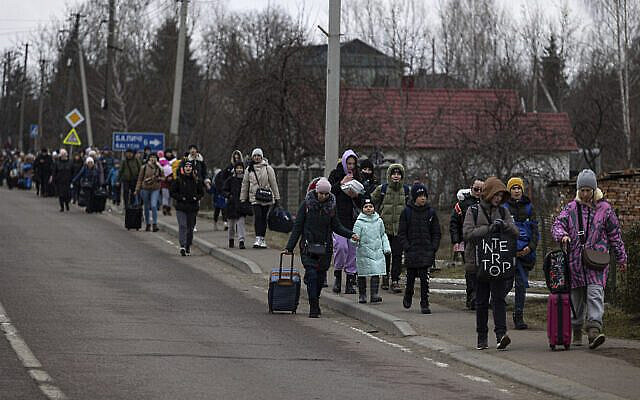 Groups of Ukrainian refugees walk along the road between Lviv and Shehyni, in Volytsya, Ukraine, Saturday March 5, 2022. The number of Ukrainians forced from their country since the Russian invasion has been increasing on a daily basis. (AP Photo/Marc Sanye)

I’ve been thinking a lot about the war in Ukraine – a war that has reverberated around the world.

We are witnessing a tragedy unfold before our very eyes, livestreamed on our many electronic devices.

And yet… there’s a part of me that remains in a certain amount of conflict.

Because I know that what we see is not always the truth.

The images and reports that are beamed across our screens are confronting and yet, not everything is as it appears.

We all know the deep antisemitism that has been infused in Ukrainian society for many hundreds of years. In the centre of Kyiv, there is a monument dedicated to Bohdan Khmelnytsky, a Ukrainian nationalist who lived in the 17th century. He was a military man who was also a rabid antisemite and wanted to rid Ukrainian society of all Jews. He was responsible for many pogroms that led to the murder of tens of thousands of Jews and was known as one of the greatest mass killer of Jews, until Hitler came along. In a poll from 2018, 73% of Ukrainians had a positive attitude towards him.

And yet, in Moscow, there’s a bridge named after him too…

In this current conflict, one of Russia’s stated goals is to “deNazify” Ukraine, except we can’t forget that until June 1941, when Hitler decided to invade the Soviet Union, they were allies!

Yes, Nazi Germany and the Soviet Union were allies.

They had signed the Molotov–Ribbentrop Pact just one week before Germany invaded Poland in September 1939 and part of that alliance was to divide up Poland. So while we all know about the Nazi invasion of Poland, we should also remember that the Soviets invaded Poland too!

We also cannot forget one of the greatest antisemitic fraudulent documents in history, the Protocols of the Elders of Zion, a document about how Jews were controlling the world – a document that was created by the Russians. It was first published around 1902 to tie in with a series of anti-Jewish pogroms launched by them that led to the murder of thousands of Jews.

Now, even though the document was later exposed as a forgery, the damage had already been done, because as Mark Twain reportedly said, “A Lie Can Travel Halfway Around the World While the Truth Is Putting On Its Shoes”

We can never be able to quantify the horrific effects that single document alone has caused to the Jewish People, but it is a safe bet to assume that many people accepted it as truth and because of that, it contributed greatly to Jew hatred around the world. And even more alarming is that it can still be purchased today, for there are still people who believe it is genuine!

The reality is that in terms of antisemitism, it has existed for a very long time in both Russia and Ukraine and both those countries have a very very dark and shameful history.

And yet from all the reports and the Zoom talks I’ve seen from Jews in Ukraine, they only have good things to say about their neighbours. And likewise, Putin, who can be called many names, has from my understanding, had a very good relationship with the Jewish people.

There are definitely times in history where wars are ‘necessary’ and where wars are ‘just,’ yet it’s hard to see how the Russian invasion of Ukraine is one of those. Because in this day and age, to launch an invasion such as this against another country, boggles the mind. And to see the terrible suffering and destruction of peoples’ lives and their homes should break the hearts of anyone who has any empathy in their souls.

But I still truly feel sympathy for those Russian soldiers on the ground who are fighting in a war not of their choosing, often brain washed and confused, living in a nightmare situation of being used as political pawns by their masters.

And while I cannot even begin to understand the desperation of the Ukrainians who are fighting for their survival, I find it abhorrent that they parade captured Russian soldiers on TV like a circus. It’s something we expect and see from barbaric Arab countries, like what Iraq did with captured American pilots.

It’s also distressing that the Ukrainian foreign minister accuses an Israeli airline of profiting on Ukrainian blood, a lie that he later apologized for, but you only need to see Mark Twain’s quote above to understand the dangers of what he did.

And it also bothers me that the Ukrainian President, Volodymyr Zelenskyy, admonishes Israel of not doing enough, despite Israel sending aid, helping refugees and attempting diplomatic solutions. He also had the nerve of saying that he doesn’t feel that Prime Minister Bennet “has wrapped himself in the Ukrainian Flag.”

Do I need to remind him that when Ukraine was on the Security Council in 2016, they voted for Resolution 2334, whose main purpose was to negate Jewish history in our Jewish land?

I certainly didn’t feel that Ukraine wrapped themselves in the Israeli flag that day either.

The reality is that we live in a time of mass social media, where everything we see and read can often be manipulated and distorted to change reality. Videos shown and pictures displayed are sometimes from different conflicts faraway from this one. Just one example of this distortion was when the Babi Yar memorial to the murdered Jews in Kyiv was reportedly damaged by Russian bombs, yet reports came out afterwards that it wasn’t damaged at all! We see this kind of thing all the time with the palestinians who always accuse Israel of crimes they invent, using images of different parts of the world or just plain lying outright. Often we have to question the sources of where information flows, because it can skewer our judgement in both positive and negative ways.

As the saying goes, “The first casualty of war is truth.”

But there is another truth too. And that truth is that in war, it’s not just about machines and missiles, but about people. People are suffering and people are in pain and in distress.

So I hope, like all fair minded people around the world, that peace will come – and come quickly.

About the Author
Justin Amler is a South African born, Melbourne based writer who has lived in South Africa, New Zealand and Australia.
Comments