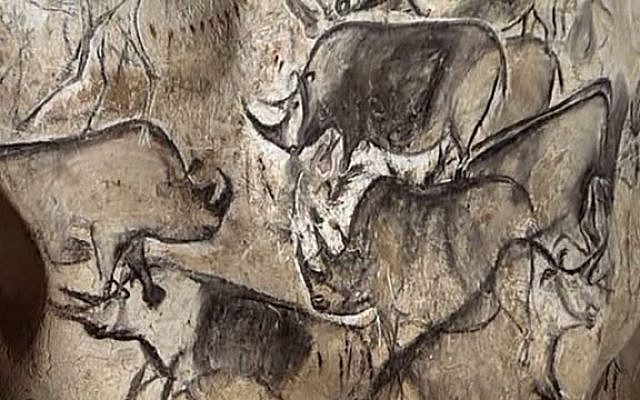 Prehistoric painting of rhinoceroses in the Chauvet Cave, France, dated circa 35,000 BP

Why does the Torah use the word kedem to express east when mizrach is more specific?

The word ‘kedem’ is commonly translated as ‘east’, however this translation is very nonspecific.  The more specific term within the text’s normative lexicon to delineate east is mizrach (e.g. Shmot 27:13, Bamidbar 32:19, Devarim 4:47, etc). Yet, this more specific directional term is frequently replaced by kedem (e.g. Bereshit 12:8). The conspicuity of preferring to use a nonspecific term demands explanation.

When investigating this difference beginning with Bereshit, the reader will notice a pattern develops quickly. Throughout Bereshit kedem is used numerous times specifically with regards to exile. First, Adam is exiled to kedem (3:24), followed by his son, Kayin (4:16). Next, the children of Noach spread mikedem (11:2). Lot eventually separated from Avraham following their quarrels and travels mikedem (13:11). Avraham sends away his children from Keturah towards kedem (25:6). Yaakov, when fleeing from Esav, departs his home towards the lands of the children of kedem (29:1). Even later in the ketuvim we find Iyov was “the greatest of the men of kedem” (Iyov 1:3). Examining these uses in context, kedem begins to direct us to a nuanced meaning. There is a clear association of kedem with exile or qualitative descent.

The first usage of the term kedem (Bereshit 2:8) is written with regards to the creation of a garden mikedem Eden, which is colloquially understood to mean “eastward in Eden”. What we see from here is that there is a place called Eden within which there was a garden kedem of its location. This can certainly mean that the garden’s physical location was within the eastern portion of Eden, however, aside from the argument that the garden’s location relative to the greater Eden is irrelevant to the reader, this point could have been achieved with far more specificity using mizrach instead. I contend that Kedem is utilized here instead to teach us the location’s temporality, not physicality.

What if kedem is primarily not a physical codifier, but a designator of chronology? In Devarim 33:15, kedem is used to mean “ancient”. With this in mind, let us now return to the term’s usage by Gan Eden. If kedem is meant to imply an ancient character to the Gan of Eden, this suggests that the garden was preexisting, a long-standing creation into which man was formed. Combining this idea with the concept of exile and qualitative descent, kedem begins to illustrate what I believe is a pivotal idea to the general history of man, especially within the context of biblical ancestry and relativism.

As I have explained at length elsewhere, Adam was not the first hominin. He was, rather, the first human to qualify as “Adam”; a special designation of human that possessed a unique quality, allowing him to begin the long awaited purpose of creation. All of the hominin up to this point were equally sophisticated, however, their existence was the preamble to the birth of Adam and the eventual lineage he would father. The natural conclusion of this idea is that there are other people in the world that significantly predate Adam, and therefore can be called more ancient, or kedem, than he. These are the people who live in the places of the ancients. It is for this reason that when Adam is exiled from Gan Eden, ‘the garden of Eden,’ he is refused entry into the rest of Eden. A garden is the entryway to the greater property. In this sense the Gan of Eden was the transition domain for Adam’s future entrance into Eden itself. Instead, he is forced back to where he was derived (3:23). Where everyone else is; the land of the ancients (3:24).

Similarly, regarding the other references involving the term in Bereshit, when a person is sent kedem, they are being sent towards where the earliest civilizations arose and contemporaneously persisted. Yet, this expulsion is not merely geographic to a specific alternative direction. Rather it represents a more profound consequence on the individual. The lands of the ancients are antiquated, limiting the progressive spirit that would be required to inspire the man of the future. This is why ultimately for Avraham to pioneer a new nation, he must leave the land of the ancients to a new land (11:28-12:1), to innovate the society of the future. Exile, or traveling kedem, meant taking a massive developmental step backwards, thrust into the obscurity of the ancients. Therefore, expulsion from the garden is a qualitative step backwards in time and potential.

When kedem is used in this context it becomes a distinction of denigration, representing the punitive result of failing to achieve the progressive aspirations of the Divine plan for mankind. When a person is condemned to travel kedem it represents his failure to achieve the lofty aspirations of the new bloodline of Adam, to progress into the future. Instead they are exiled to reconnoiter with those with whom they are more akin, the ancients stuck in the past. This is why when Yaakov is described as traveling to the “children of kedem” this unique form places the distinction upon those people to whom he is traveling and not upon himself; demonstrating that Yaakov himself is not the object of denigration. Rather, there are people where he is traveling to whom are best described by this pejorative; namely Lavan and Betuel. In contradistinction to the exiles of Adam and Kayin: for whom the exile was punitive and resulted in their personal denigration.