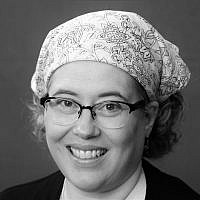 The Blogs
Jennifer Geretz
Apply for a Blog
Advertisement
Please note that the posts on The Blogs are contributed by third parties. The opinions, facts and any media content in them are presented solely by the authors, and neither The Times of Israel nor its partners assume any responsibility for them. Please contact us in case of abuse. In case of abuse,
Report this post.

Lists are very useful in certain circumstances, such as grocery shopping or remembering what has to be accomplished on a given day. However, sometimes they are less useful. For example, when someone is quizzing you suspiciously and unnecessarily about whether you have followed one.   Especially when you are naked underneath a bathrobe meant for much smaller people.  Even more so when you want to make it home in time to (possibly) have sex with your husband while he is still awake.

I was consternated and afflicted with this particular list a few months ago, while waiting to immerse myself in a mikvah, the special Jewish ritual purification bath.

Here’s a quick summary of the monthly purification process religious Jewish women undergo (for anyone who needs it.) Religious married couples observe a body of law that regulates both behavior and sexual contact. This body of law is called “taharat hamishpacha,” translated as “family purity.” Sexual behavior and touch are forbidden to couples while the woman is menstruating and for at least a week afterwards. The woman counts 5 days of menstruation, then a minimum of 7 “clean days” during which she checks herself every day to confirm non-menstruating status. After successfully completing the 12 day cycle and accompanying self-examinations, the woman is eligible to immerse in a mikvah (almost every Jewish community has at least one) and become ritually clean – and therefore permitted – to her husband.

The woman prepares herself to immerse in the mikvah by following a carefully enumerated list of rabbinically required physical preparations  – nails pared, ears cleaned, hair and body thoroughly scrubbed, etc.  The immersion itself occurs under the watchful eyes of a mikvah attendant, who is there to make sure that all parts of the woman were correctly submerged in the water. Once a woman has immersed in the mikvah and made the appropriate blessing, she can get dressed and go home to her husband. If they are lucky, she won’t bleed again for a couple of weeks, during which they can have whatever level of physical contact is comfortable for them.  (Isn’t it amazing and wonderful that there are so many religious Jews walking the earth, given all that goes into the pre-pregnancy production process?)

Even allowing for mikvah-free pregnancy months, I have spent many cumulative hours preparing for the mikvah. However, lest I or anyone else forget how to correctly prepare, most mikvas post a handy dandy list of mandatory preparation requirements. The list starts not, as one might think, with the steps of physical preparation for the immersion, but with the requirements for the entire cycle starting with day one of the woman’s period.  I have always wondered why they start that far back – isn’t it a bit too late to worry about it once you are already there cleaning out your belly button lint? However, it’s as good a way as any to remind women about the halachic standards of how to prepare correctly.

But here’s where it gets hinky. Even though the laws about when and how to use the mikvah are not subject to change, there are some areas in which rabbis can, and frequently do, exercise discretion to help women. Many of women using the mikvah’s preparation rooms have received a heter —permission from their individual rabbi — to alter or omit some of the preparation steps. Women experiencing infertility can work with their rabbi to change the timing of their immersion slightly. Women with sensitivity issues – either emotional or physical – can receive permission to modify the number of times they have to physically check themselves during the seven clean days. Women with prosthetic limbs, IUDs, stitches, or pre-surgical radiation tattoos can ask for permission to modify their preparation process. The list of complications, and resulting exceptions, is as unique and varied as the individual women immersing themselves. Not only isn’t the checklist useful for women with permitted exceptions, it may make them feel  bad every time they see the list.

Let’s say for argument’s sake that for every woman who is uncomfortable having the checklist displayed, there is woman new to taharat hamishpacha who actually needs the list to make sure she has prepared herself properly. I can be an adult and agree to be uncomfortable if that means that someone who experiences the list as supportive has the chance to get that support.  After all, it’s not like the mikvah attendant is actually going to go over the items with you one by one while you are standing naked in front of her – because she can’t know exactly what any woman has been told by her rabbi. She can’t know what the woman’s issues are. She can’t know about the community standards being followed by each woman because some women will be visiting from other communities.

Except that while I was on vacation recently, that’s exactly what happened.  I went to the mikvah at a large Orthodox synagogue near where I was staying. My (unidentified) vacation mikvah lady actually grilled me about every item on the list. Had I counted 5 days for my menstrual period? Had I waited the minimum of 7 clean days? Had I cleaned my navel carefully with a Q-tip?  Had I trimmed my cuticles?

I lied twice to the mikvah lady. I lied once when she asked me about how many times I checked myself during my 7 days, and then again when she asked about whether I had trimmed my cuticles.  I lied because it was none of her business that I have to modify how many times I check myself, or why my rabbi told me to do so. I lied because the idea of being required to trim your cuticles is ludicrous. (You need to clean them and push them back, but cutting them is stupid and dangerous and leads to infection – and that’s the first time I have heard of it being a requirement.)  I lied because I was practically naked, vulnerable, tired, and just wanted to go home to my husband. I didn’t want to have a discussion about whether I had to cut my cuticles and whose rabbi was higher up the rabbinic totem pole.

Now, though, I feel bad about the lies I told. I feel bad that I lied because lying is bad. But I also feel bad because I avoided a battle that I should have fought. In addition to fulfilling my Torah obligation, I find going to the mikvah spiritually healing, empowering, and beautiful. One misinformed mikvah lady – or possibly inappropriately authoritative rabbi – isn’t going to change my Torah observance.  But what about the woman who doesn’t have that experience – who finds preparing for or going to the mikvah embarrassing, or burdensome, or difficult for any of a variety of reasons? What about the woman struggling to do everything right, meet every requirement, who gets grilled at the last minute and is told that she can’t immerse? The woman who has to go home to a husband she still can’t touch? Is she going to continue to come to the mikvah? Or is that going to be the last straw for her? By not having that battle, by not arguing with the mikvah lady that the answers to her questions were between me and my rabbi and were none of her business, I let that other woman down. I left it to her to protest, or to meekly submit, or to be pushed away from Torah observance.

I am afraid that as the religious world becomes more contentious, stratified, and engaged in callous disregard of the prohibition against sinat chinam, “causeless hatred,” we will see more of this type of behavior.  More of “I don’t care what you do in your own community; my rabbi says it has to be this way.”  I am concerned that we are moving away from a world in which rabbis encourage us to show sensitivity and tact, and toward a world in which rabbis encourage Jews to disqualify and delegitimize each other.

Next time, I won’t lie. I will stand my ground. I will tell my challenger that the halachic process is something that occurs between me, my rabbi, and G-d.  I will tell them that the halachic process doesn’t include the necessity for justifying my choices even to (hopefully) well-meaning or misdirected or misguided individuals who want to sit in judgement of my practices.  I will ask them to examine their behavior and consider whether they are bringing people closer to observance or engaging in practices that may inadvertently drive people away.

Whether or not I am dressed at the time.