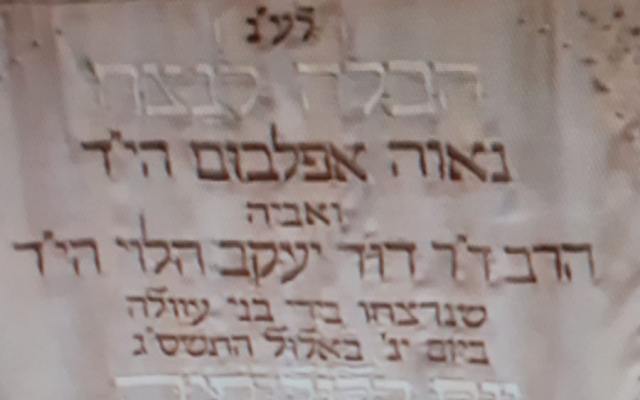 Nava’s wedding dress became an eternal covering for Kever Rachel. It seems this all is part of G-d's Plan and I understand the skirt of the dress was made into a wedding canopy underneath which Chasan and Kallah stand during the Chupah. (cropped, via Wikipedia Commons, Tamar Hayardeni)

I mentioned previously, as a member of the US Army Reserves, I trained in Fort Devens, MA for my MOS ( Military Occupational Specialty) during the time of the Vietnam War. MOS training prepared me to become a Morse Code Interceptor. But because the Commanding Officer of the Unit I joined at Fort Snelling located near the Minneapolis-St. Paul International Airport refused to honor my request not to do duty on Shabbat, I was transferred to another unit and given the MOS of a filing clerk.

That is a story that deserves a Blog of its own, and I intend writing about it in the near future. But I feel  a very important message is buried in the name Nava which I want to share with you.

IDF Soldier Amit Ben Y’Gal’s father delivered a strong message to all of us at his only son’s funeral just a few weeks ago. But we should not forget Amit’s mother Nava, who cried over her son’s coffin.

Immediately upon hearing the news that Nava was Amit’s mother’s name, I recalled a similar scene that took place in September, 2003, when instead of a woman named  Nava crying at the grave; Israel and all those concerned cried when they heard the news that Nava Applebaum and her father David were murdered in the Hillel Café terrorist attack, which I wrote about on August 27, 2019.

It is difficult to forget that day, when we were all shocked to hear that David age 50, and Nava, 20, lost their lives. Five others were killed in the Hillel Café attack, including  Alon Mizachi age 22, who was the security guard credited with stopping the terrorist before the attacker was able to gain proper entry to Hillel Café. David Shimon Avizadris, 51, of Mevaseret Zion was also killed in that same attack.

Trying to make sense from this tragedy has been a difficult task and to this day I often think about family members related to all terrorist attack victims everywhere.

How can this be?

David Applebaum who founded Terem and helped save so many lives was killed along with Nava on the night before her wedding.  According to information I discovered on Wikipedia, Nava first met her fiancé, Chanan Sand, when she was 17 and he was 16. A year later they were engaged, but delayed their wedding for two years.[9] As part of her two-year Sherut Leumi service

In Reality, Nava Applebaum Died After Serving Her Country Proudly Just Like Her Father David

Nava’s wedding was delayed so she could complete her service to her country. Her father David, in effect, devoted his life to the service of Israel as well. In other words, David Applebaum became a leader in the field of emergency medicine and was in the front lines whenever he was needed. But for some reason on that fateful day, both of their lives were cut short by a terrorist who at one precise moment robbed Israel of two precious Jewish souls.

This is really way beyond all of our understanding. Or is it?

The Haftorah is known as Machar Chodesh which are the fourth and fifth words Yonatan says to David at the Haftorah’s beginning. It is taken from the book of  Shmuel I Chapter 20 Verses  18 – 42. Because of the many times King Saul is not obeying G-d’s commandments, G-d sends the prophet Shmuel to anoint David as the next King.

The Story Of David And Goliath

Just prior to the source for the abovementioned Haftorah, toward the end of Chapter 17, we find the famous story about David and Goliath. Verse 43 said that Goliath cursed David, but David was not afraid and challenged Goliath by saying he would smite Goliath and the whole earth will know that G-d exists in Israel.

Goliath then arose and moved closer to David whereupon David responded by slinging a stone at Goliath, which penetrated his forehead. Goliath fell face first to the ground. To emphasize the miracle, it was written that David had killed Goliath with only a slingshot and stone;  David had no spear in his hand. This shows that not through sword or spear does Hashem grant salvation, but rewards those that are faithful to G-d and punishes those who talk against Israel and its people.

In June, 1967, like all other wars, Israel was facing an enemy similar to the battle between David and Goliath. Israel was given a very small chance of winning the war. But we all know the outcome and have seen and read with our very own eyes all those miracles that have taken place during and since that time.

We celebrated Yom Yerushalayim this past week. It was Lt. General Mordechai Gur who commanded the brigade that penetrated Jerusalem’s Old City  including the Western Wall. He broadcast those famous words “ The Temple Mount Is In Our Hands”.

From all of this we must conclude, that indeed as has been written and quoted many times,  the Land of Israel is “The Land which G-d’s eyes are upon from the beginning of the year until the end”.

Mordechai Gur and Entebbe
Before the Entebbe rescue mission, Mordechai Gur was serving as IDF chief. In a TOI article dated 6 October 2014 it was revealed Gur said in a declassified briefing with Shimon Peres and military brass, regarding the “Entebbe Rescue” planning,  it was best to leave ‘fantasies’ to fiction.

However, Gur noted in the discussion that should the diplomatic negotiations to secure the release of the hostages prove ineffective (as they ultimately did), “then the level of risk I can take would change — it’s an entirely different story.”

It remains unclear from the documents when precisely this conversation took place, and whether the Israeli forces managed to gather more information and subsequently received Gur’s approval, or whether the failure of talks pressed him to advance the campaign.

But Gur eventually agreed to let the mission go ahead, and we all know now it was a miracle that only one IDF soldier, Yonatan Netanyahu  was killed during that operation.

Military Miracles In Israel And The West Point Military Academy

The Six Day War and the capture of the Old City and the Temple Mount was a major turning point for Israel in its fight for survival. It signaled the beginning of a series of miracles which came at a very high price both financially and regarding the number of Israeli casualties. These miracles have resulted in Israel now becoming a major Middle East power, while the military might of the Arab nations has been considerably weakened.

At the West Point Military Academy in the US, while wars fought throughout the world are studied to learn military strategy, the Israeli wars are excluded from the curriculum. This is because according to military strategy, Israel should have lost them all. At West Point Military Academy, it benefits to teach logic and not the unexplainable miracles that make up Israel.

It is therefore interesting that Mordechai Gur became the commander of the unit that captured the Temple Mount and also served as commander of the Entebbe raid. These were clear miracles with the same commander in charge. And with Mordechai his name, it reminds us of the hero in Megillat Esther.

Israel must constantly keep alert because at any minute its Arab neighbors have not learned their lessons and continue to launch a wide range of terrorist attacks. The simple fact that we do not need the help of other countries to fight our wars is a miracle all by itself

I also want to point out that Mordechai Gur served as Golani Brigade Commander in the early 1960’s. Amit Ben Y’Gal had to have special permission to serve in the Golani Brigade, which his father gave him. And yet what took Amit’s life was a stone thrown by a Palestinian.

It’s amazing to think that since its independence, Israel has become  stronger militarily compared to its Arab neighbors. It is important it remains that way because there is no sign from the terrorist groups that operate here their attitude will change anytime soon.

But That Begs The Question, Given The Need For Highly Skilled Medical Professionals, Why David Applebaum And Daughter Nava Were Killed?

As mentioned before, if Israel would have the same attitude as the terrorists, Israel is perfectly capable of defeating any threat to its borders. That would eliminate terrorist attacks from our cities as those responsible would be automatically eliminated. But Israel is not doing so, and this is the ironic part of this whole story about David Applebaum and Nava.

David would always treat anyone needing help as I understand it, Jew or Arab, it made no difference to him. And yet the very same people he was happy to treat were responsible for David’s killing. Therefore, if West Point is having difficulty understanding why Israel always wins its wars, it must be having a harder time understanding why Israel does not eliminate this terrorist threat once and for all.

Because Laban was a very untrustworthy person, Yaakov and Rachel gave each other a sign before their marriage took place. But just as they figured, Laban suddenly switched Leah for Rachel and in order not to embarrass Leah at the Chupah, Rachel gave Leah her sign.

Here are facts to match the numbers above-

1 = Of Course One Represents Hashem

6 =  Six hours before the Hillel Café attack IDF soldier Yonatan Peleg, died along with eight other IDF soldiers in a terrorist attack at a bus stop near an Army base south of Tel Aviv.  Yonatan was buried the same day as  David and Nava.

5 = Five others died during the Hillel Café attack including Alon Mizachi age 22, who is mentioned above.

Alon’s brother Doron said at the time “I’m sure he knew he was stopping a terrorist. He saved at least 30 lives. Alon was a hero at heart. He was killed instantly and apparently didn’t suffer”.  This was recorded on the Israel Foreign Ministry Site.

The Final Result Of The Above Equation

Twenty One = Twenty Plus One

One = Just as the Aleph is a silent letter with no sound of its own, Hashem  remains silent behind the scenes creating every part of his “Vast Eternal Plan”

It is up to us to seek out Hashem and the meaning behind everything that happens to us. Using Gematria is a very helpful tool in accomplishing this goal.