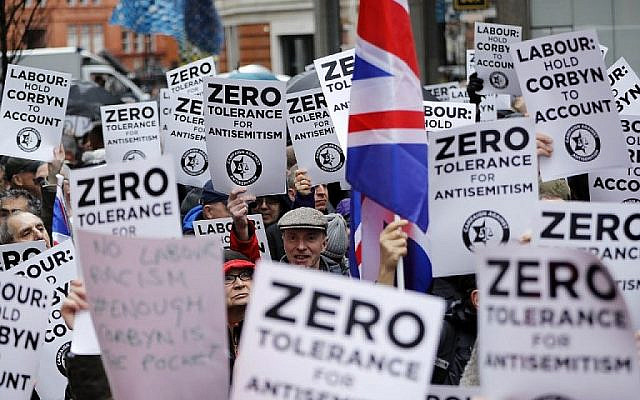 People hold up placards and Union flags as they gather for a demonstration organized by the Campaign Against Anti-Semitism outside the head office of the British opposition Labour Party in central London on April 8, 2018. (AFP/Tolga Akmen)

“Jewish man assaulted in Crown Heights,” “Texas synagogue cancels services after threat to Jewish community,” and “Swastika spray-painted on elementary school playground in California,” were just a few of the dozens of frightening antisemitic incidents that were reported in the month of July alone.

There is no question that antisemitism is stealthily creeping across the West. Earlier this year, the Jerusalem Post revealed that the rise in antisemitic hate crimes in the United States has nearly tripled since 2015. In the United Kingdom, Jewish people are four times more likely to be targets of hate crimes than any other faith or racial group, as published by the Campaign Against Antisemitism charity organization.

While an age-old form of hatred, the recent eruption of antisemitism throughout the world feels different than the version that the older generations were once familiar with. Fueled by popular social media platforms, such as Twitter, Instagram, TikTok, and Facebook, antisemitism has, somehow, become “trendy” among the youth of today.

Social media should act as a forum for individuals to express themselves, but instead, it has become a space that is flooded with propaganda fostered by woke “social justice” warriors and permits the mass spreading of misinformation as well as virtual and psychological assaults on Jewish and Israeli users.

Moreover, antisemitic hashtags, tweets, and imagery are simply being tolerated by the administers of these social platforms. There are little to no repercussions for users who use “Hitler was right” hashtags or term Israel as an ‘apartheid state’, ‘oppressor’, or ‘colonial project’.

What is most problematic, however, is that the hate that is generated online actually manifests in the outside world. In the United States, for instance, college campuses have become hotbeds for antisemitic demonstrations. Israeli Apartheid Week has grown into an established annual event at dozens of universities. Pro-Palestine rallies have turned into anti-Israel, and in turn anti-Jewish, events. It is becoming increasingly more uncomfortable, let alone dangerous, for Jewish students to express their identity and pride for their culture and religion in spaces of higher education.

In the United Kingdom, Antisemitic double standards in the parliament’s labor party have trickled into social trends, despite its pledge to protect minority groups. The National Union of Students (NUS), the country’s largest student representative body, has also failed to protect Jewish students by permitting several university professors to publicly reject the International Holocaust Remembrance Alliance’s definition of antisemitism and instead promote BDS and anti-Israel propaganda. Most recently, Shaima Dallali, the newly-elected head of the NUS is being investigated following her tweets referring to massacres of the Jewish people.

Antisemitism exists. It has infiltrated almost every facet of life, everywhere in the world, and there are no signs indicating its eradication anytime in the near future. Thus, the responsibility falls on us, the Jewish educators, rabbis, parents, and leaders in the community. We must ask ourselves – how can we protect the Jewish youth from this discrimination? How do we prevent our children and students from feeling like they must hide elements of their identity in public spaces? How can we encourage them to wear their Judaism proudly? And, what measures must we take to ensure this hatred is eliminated from all platforms?

Throughout our entire history, the Jewish people have refused to accept hostile conditions and prejudices in both the Diaspora and within Israel. I hope that in the years to come, we will succeed in piercing the radio silence surrounding Antisemitism and reveal the injustice faced uniquely by Jewish people.

About the Author
Since 1982, Jeff Seidel has introduced thousands of Jewish college students to their first Shabbat experience as well as offered free tours and classes through his Jewish Student Centers at Hebrew U in Jerusalem, Tel Aviv University, Ben-Gurion University in Beersheba, and IDC in Herzliya. He has lived in Jerusalem’s Old City for over thirty years and connected tens of thousands to the Land of Israel. He has also authored “The Jewish Traveler's Resource Guide,” which lists Shabbat placement programs around the world.
Related Topics
Related Posts