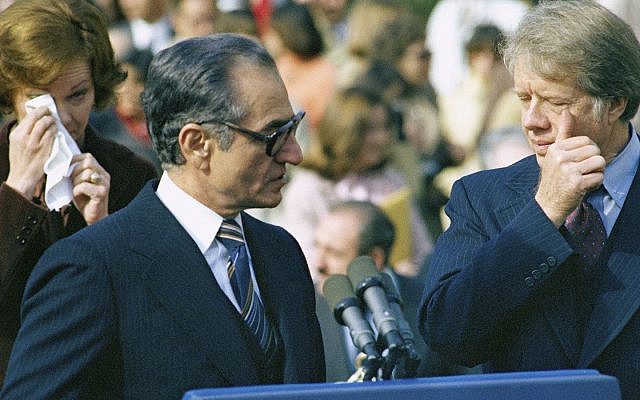 Shah of Iran and Jimmy Carter

The harshest ever winter in Iran began on January 19,1979. It has lasted 42 years and counting. It was on that fateful day that the late Shah, Mohammed Reza Pahlavi, faltered.

The Shah. King of Iran, had instructed Iran’s army and SAVAK to stand down. In doing so, the protesters got their wish. All their dreams came true (be careful what you wish for) and as Shah taxied down the runway heading to Egypt, Khomeini rubbed his hands and licked his lips. The nightmare had begun.

The Middle East would be an entirely different place today if the Shah had acted just a little bit differently. Here is how it all went down. Khomeini had done his homework and his mission. He had the backing of Jimmy Carter, who was about to make a gigantic blunder (with his support for the new regime behind the scene). The Shah blinked and thought to himself Khomeini has the backing of the USA so I better get out while the getting is good. In fact Shah was peace loving and zealous Iran-lover!

In truth had the Shah stood his ground put down the uprising, AMERICA would have backed down and went away. They didn’t love Iran that much. Robert Armao, in an interview with me, is of opinion that ” history will be kind to the Shah “. It could be, but when examined closely, by standing down the protestors were spared only for short time. Khomeini killed them anyway plus many, many, many more over the next 10 years.

Moreover, the massacring, which started in 1979 still goes on today with Mullahs, doesn’t it?

Had the Shah had the mindset of Gaddafi or Saddam this would never have happened. Because they would not have blinked and casually handed over the reins of power to Carter and Khomeini.

Ronald Reagan himself 2 years later said ” it was a disastrous move on the part of Carter” how right he was!

You see Jimmy Carter, coming from the deep south of the United states was of opinion that Khomeini was a Holy man when in fact Khomeini himself was 100 times worse than the Devil himself. “Radical Islam ” and ” Clerical Fascism ” are born here is how ridiculous the USA role in all of this was.

A year later in 1980 the CIA toyed with the idea of putting Reza Pahlavi, the son of the Shah, backed in power. How weird is that?

Now 42 years later, a new generation of protestors are talking about bringing Reza Pahlavi out of exile and overthrowing Khamenei, the current tyrant of Iran who I don’t need to remind you is a total Disaster! but the crown prince Reza Pahlavi has no zeal and desire!

When you look at the twist and turn that have taken place in Iran over the last 40 years, you arrive back to middle of 1970’s, a time of harmony and stability prevailed, which is where the current protesters of Iran want to go. A time when Jimmy Carter, George H.W. Bush, Ronald Reagan, Richard Nixon visited Iran and Iran was close ally of USA in the region.

The young Generation realize that the Mullah’s network that exists today is nothing more than a recipe for disaster. They are not willing to buy into the ideology of the “Islamic Terrorist”, which is all the Mullahs and ayatollahs have to offer. Take that away and guess what?, ” no more Mullahs. Mullahs all gone. God is great!”.

Two years ago, as you walked the streets of Tehran with the protesters, you could hear ” peace be with you Reza Shah!” Along with some slogans in favor of ” prince Reza Pahlavi “. They wanted Reza Pahlavi , the first Shah’s grandson, to lead the Iran of the future. Didn’t they?

Going forward, the only chance Iran has is to get rid of these toxic, worthless mullahs and ayatollahs. These protesters need to setup their game and somehow come together in unity, with one goal in mind . Their mindset has to be laser- focused on the elimination, at all costs of this dead weight( criminal mullahs and ayatollahs) that is like an albatross around the neck of iran.

The famous Iranian journalist, Amir Taheri, would be in total agreement with me , he has written countless articles along the same vein. His beliefs, mine along with many others are gaining traction minute by minute. If everything goes according to plan the future of Iran will be bright.

Through the thousands years history of Iran different brutal leaders came to power, ruled and disappeared.

Accordingly, just 2 years ago Farah Pahlavi, the widow of the late Shah, after being insulted by the coward Khamenei said:” all dictators collapsed, yours will be no different!”. Words to live by!  the Iranian and the World will celebrate the ruin of religious octopus in Iran and Islamic caliphate of Shia Mullah’s autocratic regime.