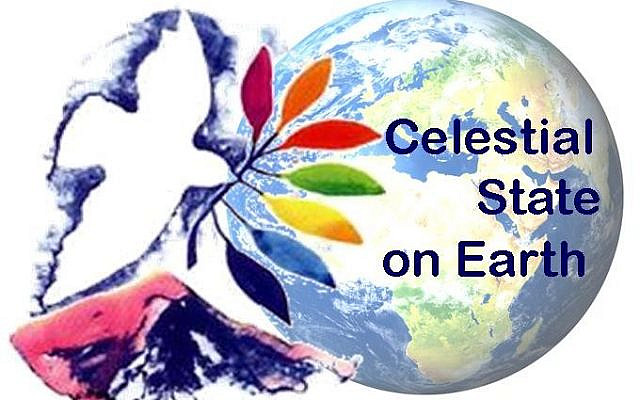 Cover of the book Celestial State on Earth, The Project, by Leon Moscona. Design of the Cover: Don Conroy and Bernadette Brannick

Most of the world religions acknowledge that in our time the Divine impulse for the unfolding of the Indo-European cycle has fulfilled its function and now it is returning back to the Origin of Being. This means that we have to transcend the reality of the material world and then to experience first the celestial world (the reality of the Garden of Paradise) and later on – the reality of the higher Divine world, the Heavenly Jerusalem. In other words, the Indo-European cycle of evolution has come to a close and we have to enter into a New Cosmic cycle with a New Heaven and a New Earth as a New Humankind!

The coming new epoch in the life of humankind is its New Cosmic Cycle of Existence in the reality of the New Heaven and the New Earth. This New Cycle is the fulfilment of the cherished dreams and prophecies in the world religions. Below I will quote a few of them to give the fragrance of the coming new reality.

The Prophet Ezekiel finishes his book with the inspiring words (48:30-34): There are twelve entrances to the city of Jerusalem. Each of the four walls measures 2,520 yards and has three gates in it, each named for one of the tribes… The total length of the wall on all four sides of the city is 10,080 yards. The name of the city from now on will be “The-Lord-Is-Here!”

St. John also saw the New Heaven and the New Earth: Then I saw a new heaven and a new earth, for the first heaven and the first earth had passed away, and there was no longer any sea. I saw the Holy City, the New Jerusalem, coming down out of heaven from God, prepared as a bride beautifully dressed for her husband. And I heard a loud voice from the throne saying, “Now the dwelling of God is with men, and he will live with them. They will be his people, and God himself will be with them and be their God. He will wipe every tear from their eyes. There will be no more death or mourning or crying or pain, for the old order of things has passed away.” He who was seated on the throne said, “I am making everything new!” (Revelation 21:1-4,5)

In one of the branches of Islam, Isma’ilism, the cyclic conception of history forms the core of its metaphysical conception of time: Isma’ilism has a cyclic conception of history closely allied to its metaphysical conception of time. Although a cyclic conception of time is implied in certain Twelve-imam Shi’ite sources – cyclic not in the sense of ever recurring sets of events but of other historic cycles than the present one – it is nowhere as much emphasized as in Isma’ilism. The Isma’ili works speak of a large cycle of aeons sometimes mentioned as of 360,000 years within which there are seven cycles of prophecy. Each cycle is commenced by a prophet (nabí) who has his esoteric representative or imam who dominates over that cycle, the seventh bringing the cycle to an end. The prophets and their imams for the present cycle of humanity are mentioned usually as:

The seventh is the Mahdi or ‘Imam of Resurrection’, who does not bring a new Sharí’ah but reveals the inner meaning of all revelations and prepares the coming of the new cycle. Moreover, the historical cycles alter between that of epiphany and occultation, between a period when the truth is revealed and one in which it is hidden, this alteration continuing until the end of the great cycle. At this moment comes the ‘Great Resurrection’ (qiyämat al-qiyämah) upon which man and his celestial prototype are re-instated in their original condition. Thus, through the prophets and imams the purpose of creation is fulfilled and man regains the state that he lost through his own negligence. (Seyyed Hossein Nasr, Ideals and Realities of Islam, Mandala, Unwin Hyman Ltd., 1988, pp. 170-171)

AND NOW THIS REALITY IS COMING! This is the reality of the New Heaven and the New Earth where the new Enlightened Humankind will live in a new cosmic cycle of evolution! This reality is the Kingdom of God with many mansions, the Heavenly Jerusalem, described so emotionally in the Holy Scriptures. Similar metaphysical visions about the coming New Reality in the life of humankind can be found in all world religions.

To a large extent at the heart of the Indo-European cycle are the legendary Ten Commandments of God, received by Moses on the sacred Mount Sinai, which came through the Tree of Knowledge of Good and Evil. Affirming Monotheism, they are the foundation of Christianity and Islam. Their significant influence can also be traced in other world religions.

As I mentioned in a previous Post, The Zohar teaches that the first Tablets emanated from the Tree of Life, but that Israel, by worshiping the golden calf, ‘was judged unworthy of benefiting from them. Therefore, Moses, following the divine command, gave the people other Tablets, ‘which came from the side of the Tree of Good and Evil’ (…this is permitted, this is forbidden.  (Leo Schaya, The Universal Meaning of the Kabbalah, Unwin Paperbacks, 1989, p.15).

Naturally, when humankind enters into the new cosmic cycle of evolution, the Divine Commandments will come through the Tree of Life! Then they will receive the content of the Ten Divine Blessings. They will be for all humanity and will bless us for life in the reality of the Heavenly Jerusalem on Earth!

In order to undergo spiritual rebirth and to enter into the new Cosmic Cycle in the reality of the New Heaven and the New Earth, humankind has to establish a new Celestial State, governed by the Divine laws. The Celestial State is a moral world order, a state of consciousness, based on the values, principles, rules and regulations of Divine Love, Wisdom and Truth. It has to provide the best planetary conditions for the Spiritual Return of humankind first to the Garden of Paradise and then to the highest Divine World. Of course, everyone on Earth has to follow the laws, rules and regulations of their own government, culture, religion, but the moral laws of the Celestial State raise their vibrations to a higher spiritual level.

The new Celestial State is life in the reality of the Heavenly Jerusalem on Earth – here and now! The time has come! We are blessed to ascend from ‘the bottom of the cave’ to the Divine world where there will be no more death, or mourning, or crying, or pain, for the old order of things has passed away. The establishment of the Celestial State has to be a peaceful and harmonious transition from the existing Babylonian-type civilization to the New Heavenly-Jerusalem civilization.

The Celestial State has to work for the fulfillment of the main strategic task for humankind on Earth – to protect the Earth, with all Kingdoms of Life on it, and to preserve the positive aspects of contemporary human civilization. It also has to encourage the nations on the Earth to embark on the great Journey back to the Garden of Paradise and then to the reality of the Heavenly Jerusalem.

Life in the Celestial State is life in the reality of the Heavenly Jerusalem on Earth, in the presence of the Divine Masters and Personifications of the Divine Feminine. In this reality we will meet the Divine Masters and we will participate in the Divine Wedding in Heaven. We will co-create with them to raise the vibrations of the Earth, with all Kingdoms of Life on it, to a new cosmic level of evolution. Thus, we will become Cosmic-spiritual Beings – Sons and Daughters of our Divine Father-Mother, building the Temples of life in the New Reality. Of course, many people will not have the experience of this reality initially, but they will be like little children ‘baptized’ in it, and, as they grow up, they will become more and more conscious of this Reality!

Let us embark on the great journey from the restricted earthly consciousness to the reality of the Heavenly Jerusalem (the Kingdom of God with many mansions) and establish the new Celestial State on Earth! In our unity lies success!