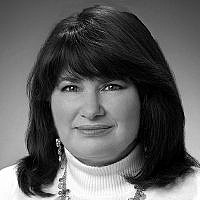 The Blogs
Ricki Hollander
Apply for a Blog
Please note that the posts on The Blogs are contributed by third parties. The opinions, facts and any media content in them are presented solely by the authors, and neither The Times of Israel nor its partners assume any responsibility for them. Please contact us in case of abuse. In case of abuse,
Report this post.

The New York Times is so consumed with everything that goes on in Israel that it actively ‘campaigned’, so to speak, against Israeli leader Benjamin (Bibi) Netanyahu in the run-up to Israeli elections. Even Paul Krugman, an economic affairs columnist, weighed in with an attack piece on Netanyahu a day before the election (“Israel’s Gilded Age,” March 16, 2015). Accusing Netanyahu of deflecting attention away from Israelis’ “economic discontent,” Krugman expounded on what he declared was the “disturbing transformation in the country’s income distribution and society” under the Israeli leader’s helm.

The newspaper’s lead editorial following the election was a hysterical screed against Netanyahu. Under the headline, “An Israeli Election Turns Ugly,” the editorialist piled on the insults against the Israeli leader: Netanyahu was labelled “desperate,” “craven,” “duplicitous,” “subversive,” “inflammatory,” “outrageous,” “racist,” and more.

Has The New York Times ever directed similar bile against the Palestinian president for his adamant refusal to accept the legitimacy of a Jewish state in the region, or for promoting violent attacks against Israeli civilians? The answer is clearly no. The newspaper is obsessed with Israel’s alleged wrongs, not those of the Palestinians.

In addition to the editorial, there were op-eds by two of the newspaper’s regular columnists who bemoaned the results of the elections and several news stories, two of which appeared on the front page.

It is disturbingly evident that the news side of the newspaper does not differ much from its editorial pages. New York Times news coverage similarly appears to be aimed at influencing opinion against Bibi. An example in point is the front page news analysis that appeared in the wake of the elections, entitled “Deep Wounds and Lingering Questions After Israel’s Bitter Race.” Just like the above-mentioned editorial smearing Bibi (published in the same edition), the article hurled epithets, for example, “cynical” and “calculating,” at him, attributing the insults to unnamed “critics.” And readers were informed that Netanyahu conducted “a shrill campaign that raised questions about his ability to heal Israel’s internal wounds or better its standing in the world.”

In its zeal to denigrate the democratically elected Israeli leader, the article misinformed readers with the overstatement that Netanyahu “railed against Israeli Arabs because they had gone out to vote” and later in the story, that he “launched a tirade against Israel’s Arab citizens.”

In fact, Netanyahu did not direct a tirade against Israel’s Arab citizens. Nor did he rail against Arab citizens for voting. His was a rallying cry to his supporters to bring out the vote for his party and counteract what he saw as a foreign funded, bring-out-the-vote effort on behalf of those trying to topple him, namely Herzog’s party and the “Joint Arab List.” In one of his messages, he clarified that his problem was not with Israeli citizens–both Arabs and Jews– voting as they see fit..

But that part of Bibi’s quoted message was completely missing from the published news analysis. Nor did even the selected quotes from Bibi’s controversial comments appear on the front page (which noted only that he railed against Israel’s Arabs for going out to vote). The clear, but false implication was that Prime Minister Netanyahu opposes voting rights for Arab citizens.

So what exactly did Netanyahu say? And what did the news analysis and editorial omit?

Right-wing rule is in danger. Arab voters are streaming in large numbers to the polling stations. They are bused in by leftist NGO’s. We don’t have V-15 [“Victory 2015″‘ a foreign-funded organization to defeat Netanyahu]. We just have ourselves. Go to the ballot booths. Bring your friends and family. Vote for “Likud” in order to close the gap between us and the “Labor” party.

We are in a critical campaign. There is still a significant gap between “Labor” and “Likud”. The only way to close the gap is to come to the polls and vote for “Likud”. The gap between “Labor” and “Likud” is due primarily to large amounts of foreign money flowing into left-wing NGO’s. Their purpose is to replace “Likud” with a left-wing government, with the support of the “Joint Arab List”.

Ayman Odeh, chairman of the “Joint Arab List” which supports Herzog has already said that it is not enough just to replace me, but that I should be thrown into prison because I defended the lives of Israeli citizens and IDF soldiers. They say that Hamas is not a terrorist organization. This is the list [party] that supports Buji [Herzog’s nickname]. This is the party that has an agreement with him. A left-wing government that is dependent on such a  party’s support will give in all along the way. And therefore there is a tremendous effort by the leftist NGO’s to bring voters to Gush Shmuel, especially in the Arab sector and in the electoral districts of the left.

I want to make it clear. There is nothing wrong with voters – Jews and Arabs alike – to vote as they see fit. What’s unacceptable is that huge amounts of money from abroad from foreign NGO’s and governments are bringing them en masse to polling stations in an organized manner. This foreign money is distorting the true will of the citizens of Israel to the benefit of the “Left”, giving exaggerated (in the article, the word is translated as “excessive”) power to the radical “Joint Arab List”. This can reduce the right-wing bloc in a manner where we cannot form a government, even though most of the citizens of Israel support the nationalist camp and me as prime minister on behalf of the “Likud.” We do not have the left-wing NGO’s, we do not have the V-15. We have only you, the voters for the nationalist camp. So go en masse to the polls.

As it turns out, this news analysis was redacted to delete relevant passages of Bibi’s Facebook message.. Although some of these comments were posted online in the original article, they were deleted from the published version, presumably because they did not support the image the newspaper was trying to promote of an anti-democratic and racist Netanyahu lashing out Arab citizens for voting in the election. The following passages were removed by New York Times editors:

Denouncing the Joint Arab List, a coalition of four small Israeli-Arab parties that could influence the outcome of the vote, Mr. Netanyahu spoke of a conspiracy between them and his leftist opponents, supported by what he described as outside money.

“A leftist government that depends on this list will surrender all along the way,” he said in Hebrew in his Facebook speech.

“I wish to clarify, there is nothing wrong with citizens voting, Jewish or Arab, as they wish,” he said. What was wrong, he said, was that foreign-funded leftist organizations were bringing droves of voters to the polling stations in buses in a way that “distorts the true will of the Israelis in favor of the left, and grants excessive power to the radical Arab list.

This is not the first time The New York Times has suppressed information that does not support the message it is trying to promote. When US Secretary of State John Kerry blamed Palestinian incitement for the brutal murder of Jews praying in a Jerusalem synagogue –“a pure result of incitement and of calls for days of rage” by the Palestinian Authority – and called on the “Palestinian leadership at every single level to condemn this in the most powerful terms,” New York Times editors deleted his comments from the published version of the article. These comments supported a narrative that The Times does its best to conceal, namely, that the Palestinian leadership and its incitement are major contributing factors to the ongoing Arab-Israeli conflict.

The newspaper’s current editorial mission, as demonstrated both on the news and opinion pages, is to smear Israel’s prime minister in the harshest terms, and this is hindered by relaying any of Netanyahu’s mitigating comments.

But by overstatement and concealing inconvenient details, The New York Times,is cementing its growing reputation as the advocacy journal of record.

About the Author
Ricki Hollander is a senior analyst at CAMERA, Committee for Accuracy in Middle East Reporting in America.
Comments