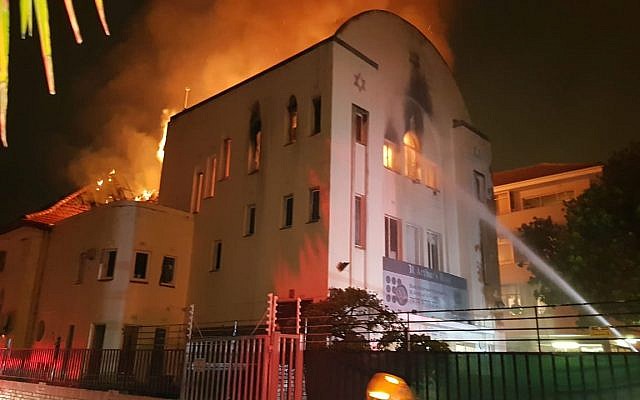 “Did you hear what happened to the Young Israel last night?”

The chilling news coursed through our neighborhood on a frosty winter’s morning, 25 years ago this week. As we dropped off our children at preschool, we learned that a devastating fire had swept through the Young Israel of Brookline on the night of January 11, 1994, leaving the building in ruins. Two of the Torah scrolls had been saved; the others could not be retrieved in time. Was the blaze caused by arson? No one knew, but suspicions abounded. In the end, it emerged that the fire was a result of an electrical problem.

My first thought was how my 3-year-old son would respond. Going to shul on Shabbat morning, and especially participating in the children’s service, had become part of the rhythm of his life during the six months since we had relocated from Jerusalem to Boston. But suddenly the shul was gone, and would take years to rebuild. While we had only lived in the community for a short time, the sense of loss was palpable.

The Night the Shul Burned Down, I lettered in black pen on a makeshift stack of papers that was to become a miniature children’s book. Inside its stapled pages, cartoon illustrations depicted Uriel, Jerry, Marissa, and Sasha, my son and three of his classmates, doing the things they loved at shul: playing in the children’s room, praying at the children’s service, and enjoying kiddush refreshments at a special children’s table when the services ended and they rejoined their parents. But then the storyline took a more ominous turn:

One night, when it was very dark and very quiet and there was lots of snow on the ground, a terrible thing happened. A big fire started in the shul and the shul started to burn down.

As I wrote and doodled, flames filled the air, someone called the fire department, firefighters valiantly fought the flames, until the dramatic highlight — and most terrible part — of the story:

“Save the Torahs!” the firemen called. But it was too late. The Aron Kodesh started to burn and 10 Torahs could not be saved.

With tears streaming down my face, I dug down into rich wellsprings of Jewish tradition and pulled out the only image possible: the vision that Rabbi Hanina ben Teradion, one of the 10 martyrs executed by the Romans during the Hadrianic persecutions, described to his students when he was wrapped in a Torah scroll and set on fire.

The firemen watched sadly as the holy letters of the Aleph Bet flew up out of the Torahs and into the sky. 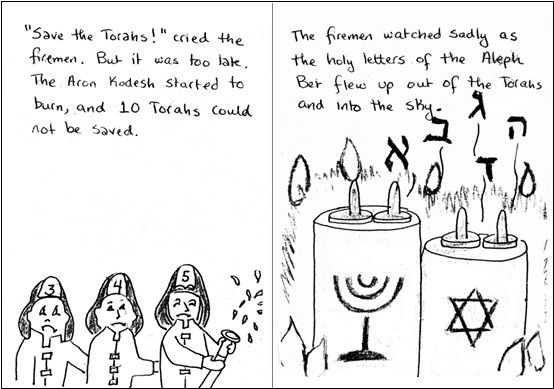 After acknowledging the grief of the parents and sense of loss of the children, the book, of course, ended with the hope for an even more beautiful Young Israel of Brookline, which would be built speedily and in our day.

For months after the fire, my son and his friends, aged 3 to 5, clamored for dramatic readings of The Night the Shul Burned Down. They acted out the happy scenes of being in the synagogue. They pretended to be the fire, sizzling and hissing on our living room rug. They took turns portraying the firefighters, squirting imaginary water in valiant attempts to quell the flames. Acting out the scenes seemed to diminish the trauma, help them process, and gain control. “Save the Torahs!” was their rallying cry. The image of the letters miraculously flying up to the heavens captured their imagination, giving them comfort. A part of the Torahs was saved!

The shock of that morning in Boston came flooding back to me last month in Jerusalem, as we woke up to the news that another synagogue that my family loves had gone up in flames overnight. This time, it was Beit Midrash Morasha in Cape Town, known by the locals as the “Arthur’s Road Shul.” My husband and I have been there on Shabbat twice in the last few years, when taking our Israel-born children to see the country where their South African-born father — now Eliezer Be’eri, but then Leonard Berelowitz — was raised.

The Arthur’s Road Shul is a warm and welcoming Modern Orthodox, religious-Zionist community in Sea Point, a beautiful beach-front suburb of Cape Town. Originally a Dutch Reformed Church, the building was purchased in 1953 and was converted to a synagogue. In its first incarnation, the shul was the Hebrew Congregation Chabad, where sermons were delivered in Yiddish, which most of its members understood. Hasidism, however, did not catch on in Sea Point, and the shul began to experience financial and managerial problems. In its next incarnation, it became the Arthur’s Road Hebrew Congregation, and began to thrive. Today it is known as Beit Midrash Morasha, and is affiliated with Bnei Akiva and Mizrachi of South Africa. 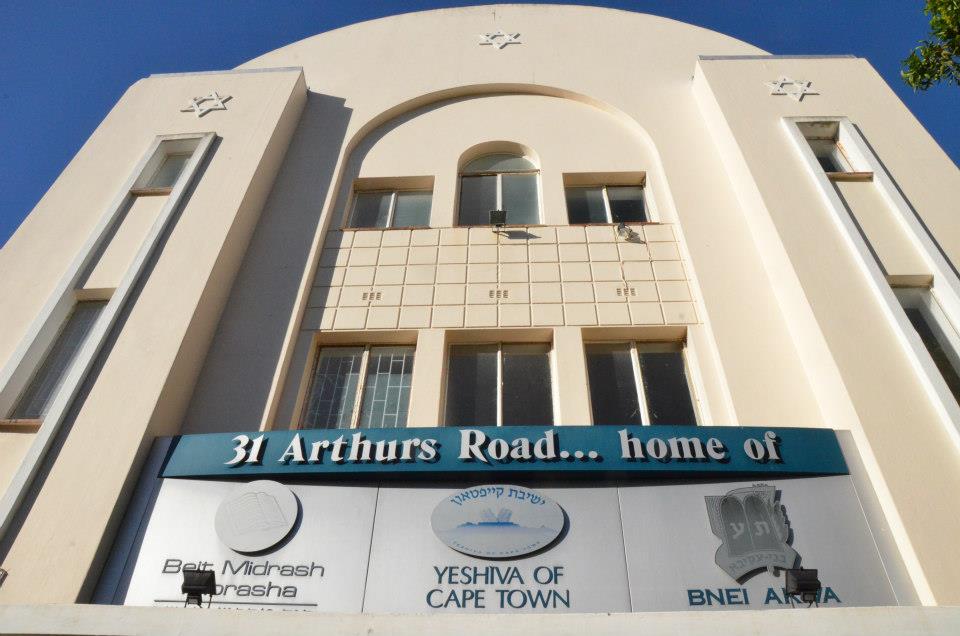 The spiritual leader of the community, Rabbi Sam Thurgood, is a dynamic and passionate speaker and teacher who infuses the congregation with positivity. Born in Johannesburg and raised in Durban, he eventually found his way to the southern tip of Africa. His wife, a physiotherapist, is simply known as Aviva and is perhaps the only Orthodox rebbetzin in the world with a second Dan blackbelt in full contact karate. They have been leading the community since 2012.

When we visited the Arthur’s Road Shul, we found ourselves in a spirited and friendly synagogue in which people said, “Good Shabbos, are you visiting?” even before they knew that my husband had been their counselor in Bnei Akiva decades ago. It’s a community with a quiet, sincere, and respectful prayer service, with an engaging sermon and a great deal of joy. Birthdays — even if they are not marking the change of a decade — are an occasion that warrants being called up to the Torah and dancing around the bimah, where all the children, boys and girls alike, gather when it is time to sing Adon Olam. At the end of the service, the shamash (and more recently, we understand, the rabbi) gives a remarkably dramatic rendition of the coming week’s weather forecast at the end of the announcements. 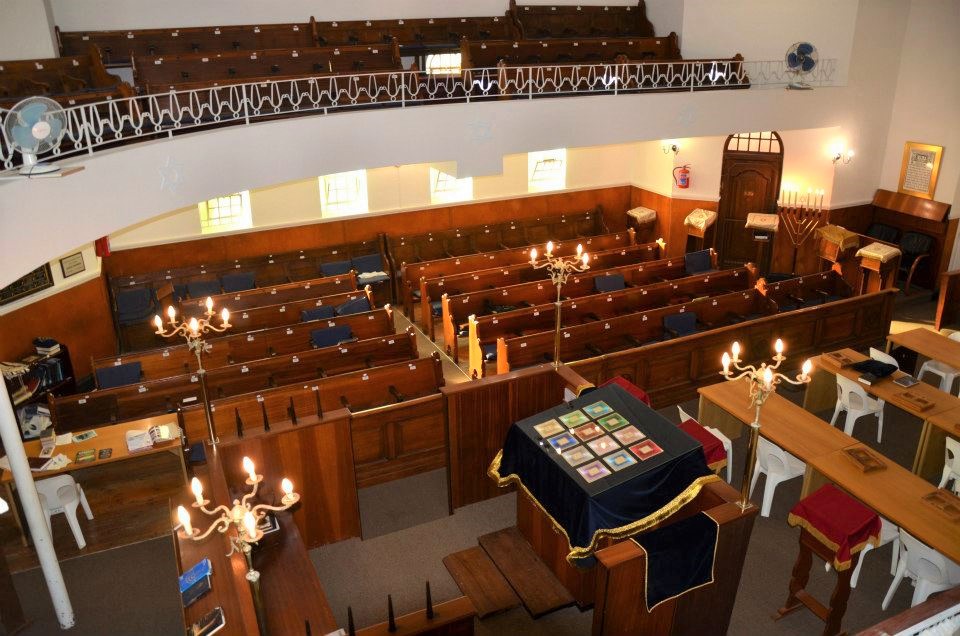 The sanctuary or Beit Midrash Morasha before the fire (Beit Midrasha Morasha, Facebook)

The kiddush that followed the service — known in South Africa as a “bracha” or “brocha” — was full of all that is good and bountiful. A highlight for my husband was chopped herring on kichel, a traditional South African Jewish delicacy, while I, as a traveler without a Shabbat urn, was thrilled to enjoy a cup of hot coffee (a practice that we tried to bring back to our synagogue in Jerusalem). Cheese platters, vegetable platters, mini-quiches, samoosas (as they are called in South Africa), and a variety of delicious home-baked cakes meant that Shabbat lunch was barely necessary. The kiddush-bracha was an opportunity for us to speak to members of the community, whose numbers are dwindling. Most of our peers there have children who are living in Israel, Australia, Canada, and the United States; as they described it, they are torn between their need to see their children and grandchildren in faraway lands and the needs of their own employment and their aging parents in South Africa.

Food for the body was followed by food for the soul, as Morasha is a community of learning. Each week, Rabbi Thurgood tells the children a story from the Prophets and Scriptures, in a practice initiated by the children themselves. The children’s “shiur” is followed by a class for the adults, who are treated to meaningful and relevant content dispensed with both passion and humor. (On the Shabbat that we were there, the lecture was on kashrut as an ethical system, and my then 17-year old son, who had heard the rabbi’s sermon during the service, asked to stay.)

Tragically, late on the night of December 4, 2018, Beit Midrash Morasha was consumed by a fire that destroyed the sanctuary and all seven of the congregation’s Torah scrolls. Many people, including the fire fighters, helped salvage most of the synagogue’s holy books. Thankfully, there was no loss of life. While it was initially reported that the fire was caused by Chanukah candles, the insurance professionals have determined that, as in the case of the fire at the Young Israel of Brookline, it was most likely caused by an electrical fault. 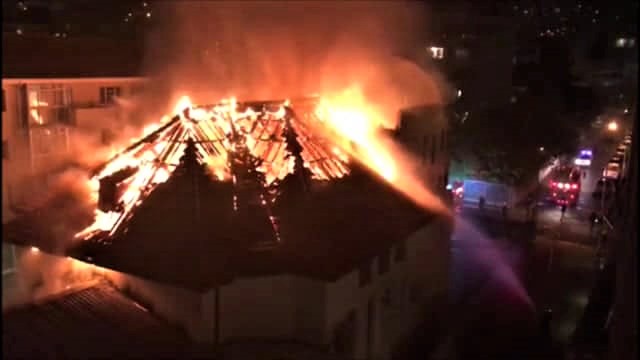 The next morning, social media was full of devastating photographs and videos of the raging fire. South Africa’s chief rabbi, Warren Goldstein, invoked Rabbi Hanina ben Teradion’s image of the letters of a burning Torah ascending to the sky, as an affirmation of the fact that while the physical scrolls may have been destroyed, the values they contained are eternal, and the service of the Morasha community will continue. Rabbi Thurgood took to the internet in his inimitable positive style and calmly explained what had happened and the way forward. Two days later, Aviva Chiger Thurgood posted a moving video from outside the shul’s mikveh, the ritual bath that had been untouched by the fire, and displayed similar faith and positivity. 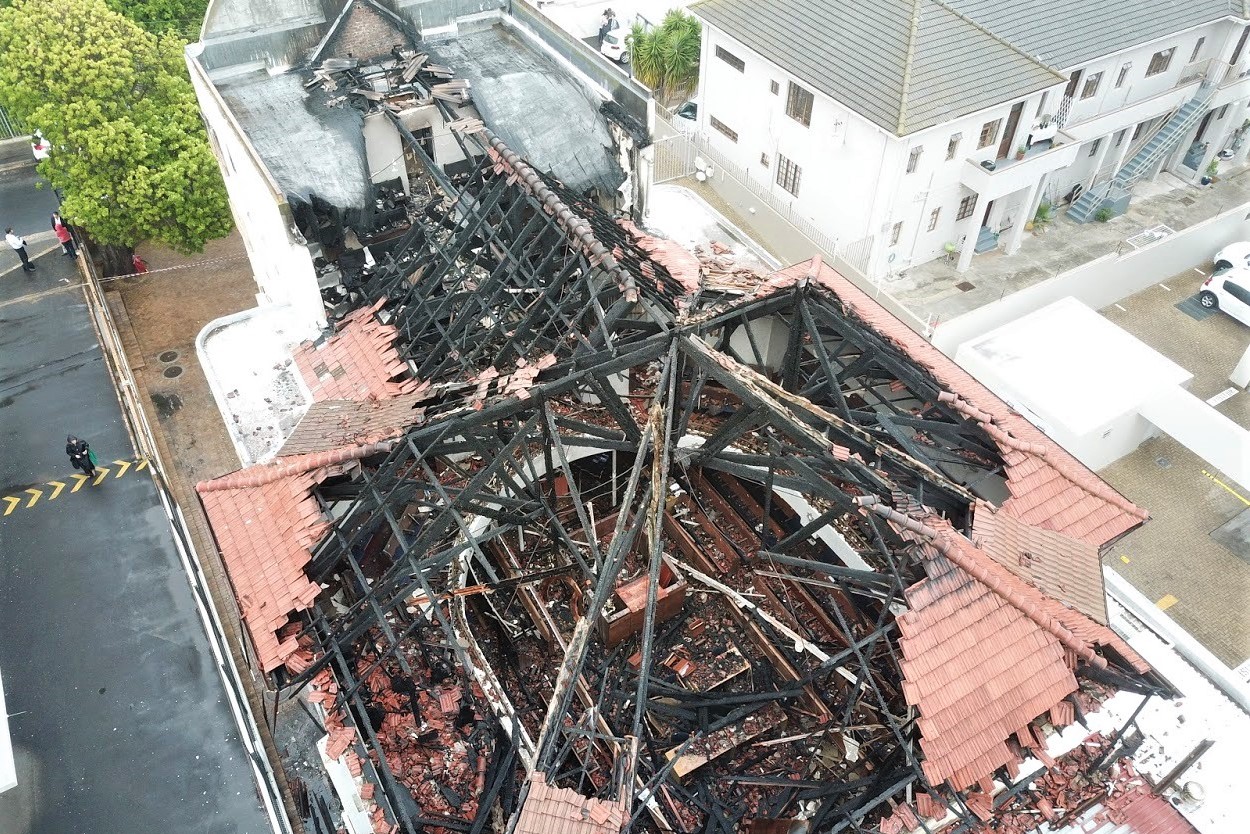 There are three ways in which you – wherever you may be in the world – can stand with the Arthur’s Road Shul and help this wonderful community recuperate from its devastating tragedy:

Synagogues play a vital, central role in Jewish life, and the loss of a synagogue and its Torah scrolls is a heartbreaking loss for us all. But these disasters also bring us together. Three years after the fire that destroyed it, the Young Israel of Brookline reopened in a beautiful new building, after intense fundraising within the community and assistance from organizations and individuals from across the United States. Today, it is the Arthur’s Road Shul, a community at the very tip of Africa, that is in need of support. Let’s all help the members of this warm and welcoming community in their process of rebuilding, and give them a warm embrace — for the sake of their children, for the sake of Jewish life in Cape Town, and for the sake of us all.

Donate to the Morasha building fund here.
Sign up to study in memory of the Morasha Torah scrolls here.
Visit the Morasha website here.

About the Author
Shira Pasternak Be'eri is a Jerusalem-based editor and translator who works as the coordinator of the Mandel Foundation–Israel's websites. She is married to Leonard (aka Eliezer) and is the proud mom of three boys, one daughter-in-law, and one almost-daughter-in-law, and is the happy grandma of one. Born and raised in New York, she has been living in Israel since 1982. And yes, she is Velvel Pasternak's daughter.
Related Topics
Related Posts
Comments