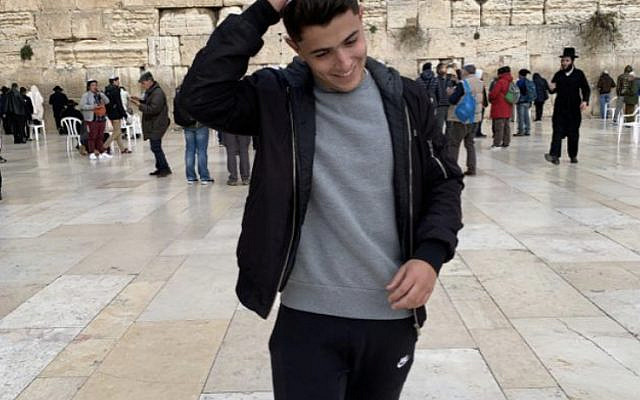 My precious son at the Western Wall

When I was a young single woman, living and working in Manchester, I’d sometimes daydream about what lay in store for me. What would my exciting life comprise? Who would I marry? Had I already met my husband? How many children would I have? Where would I live?

By this time, I’d been married almost 16 years and had 4 children.

This morning, as I prepared to take my 18 year old first born son for an interview, I thought about how different my life was now to how I’d imagined it would be all those years ago. In those daydreams of yesteryear, I imagined that I’d be taking my children to university interviews when they turned 18. One of them may even reach the dizzy heights of an interview at Oxford or Camebridge. My daydream kvellometer knew no bounds as I imagined my future offspring in their high flying roles as the CEO of some big company or other or maybe even Prime Minister; they were all destined for greatness…in my head.

What I didn’t foresee was a time when I’d be taking my firstborn for an interview for conscription into an elite combat unit of the IDF. Whatever the outcome of this interview, my son will soon embark on his mandatory service in the IDF, most likely in a combat role.

His preliminary draft date is August 3, just a few weeks away. I only found this out a few days ago as he and my husband were discussing his draft date and how he’ll be gone within a matter of weeks. When I expressed surprise at how soon it was, they both said that they’d told me umpteen times when he’d be going …I just hadn’t been listening. Simply put, I’ve been in denial for months about it.

I imagine that taking your child to university interviews must be nerve racking. If I were in that position I know I’d be nervous. I’d be wishing him or her all the success in the world and hoping against hope that the interview goes well.

As my husband and I drove our son to the interview this morning, I had very mixed emotions. Of course, I want my son to achieve success in whatever he chooses to do…but how could I wish him luck for his interview this morning and mean it? Success in the interview would mean that his service may involve dangerous missions. I wouldn’t be able to contact him on a daily basis to see if he’s ok…”have you eaten enough, Dolly; did you manage to get enough sleep (he doesn’t function well when he’s tired); have you met some nice people…?”

All of the questions I imagined I’d be asking him when he left home wouldn’t materialise. Things will undoubtedly be very different to how I’d imagined them. ‘No news is good news’ is the best I can hope for. I know it’s going to be a tough time for us all.

As we all headed for Jerusalem, my firstborn, my husband and I, we discussed this at length. We concluded that life was full of dangers…we could even have met with an unfortunate end on the drive itself, which unsurprisingly did nothing to calm my nerves (fortunately we didn’t and I’m here to tell the tale)!

We arrived at the base with half an hour to spare and waved off our firstborn. I wished him luck and told him not to worry as he’d ace the interview. Strangely enough, I actually meant it.

I’m not a religious person, but I wish I were at times like these (not that I’ve ever experienced anything like this before in my life)! A belief in Gd could help, I think.
All I have right now is the strongly held belief that we’ve done our best for our son and instilled in him a firm sense of right and wrong. This has been illustrated by his calm determination to serve his beloved adopted country, Israel, as best he can, despite the dangers that he might ultimately face.