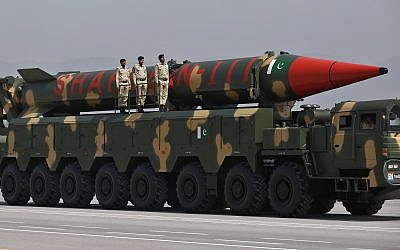 A Pakistani-made Shaheen-III missile, that is capable of carrying nuclear warheads, is carried on a trailer during a military parade in connection with Pakistan National Day celebrations, in Islamabad, Pakistan, Thursday, March 25, 2021. The military parade in the capital showcased short and long-range missiles, tanks, jets drones and other hardware. (AP Photo/Anjum Naveed)

Beating swords into ploughshares is an old dream. The dismantling of nuclear weapons and their delivery systems and reconnaissance systems will make hundreds of billions in revenue available, but whether it is enough to generate the additional employment opportunities which alone can reduce poverty on an ongoing basis, such as in third world countries, is still unknown.

The development of “the weapons” did not occur in a vacuum, and the scientific community discovered the basic principles and research. The US spent enormous effort and money on the Manhattan Project and created the first nuclear weapons. The Germans and Japanese had also been following this track, although in a very limited way.

The Russians, Soviets seized a number of German nuclear scientists and put them into their own projects. The Soviets knew that the US’ possession of the bomb was a serious tilt in the balance of power and wanted to restore it. Both Soviet Communism (and American Democracy) were opposing political systems, and each realized conflict was possible.

An attempt to rebuild the Russian military sparked an arms race with the US. The States’ decision to withdraw from NATO’s ABM Treaty was the most critical catalyst for the arms race. The US military did not develop new systems to combat Russia’s growing capabilities over the next ten years. Instead, the Pentagon believed it was in control and chose to concentrate on GWOT.

The Pentagon realized that Russia was creating some amazing technologies and outpacing the US in key technologies only a few years ago. For this race to be powerful, the United States, Russia, and China claim responsibility for creating and testing high-speed, nuclear-capable missiles. These missiles travel five times faster than sound at 1,235 km/h (or 6,100 km/h). Satellites orbiting the earth must also maintain a minimum speed of at least 60 km/h.

This means that even nuclear-capable missiles are now capable of traveling at satellite speeds. This means radars from different countries will not be able to detect these missile attacks. This marks new targets of destruction. The United States claimed last year that its missiles had reached their targets. Russia, however, made the same claim in July.

While military experts argue that China has tested these missiles, and that it has stunned the world. China’s missile system is faster than the US, but it is slower in reaching the target. Although North Korea claimed that it had built similar missiles last year, South Korea claims that the test was unsuccessful. In the second half-century, the Soviet Union and the United States emerged as the two most significant powers.

This triggered a fierce arms race in both countries, and enormous sums have been spent on long-range missiles and nuclear weapons. Some made these discoveries of the world’s most renowned scientists. Also, it was stated that a better weapon could stop wars.

The world’s power equation changed after the fall of the Soviet Union. There was hope that the pace would slow down. Experts claim that so much money was spent building these weapons that only a small fraction of the revenue could have been used to alleviate world poverty.

Experts believe that the US spends heavily on arms to maintain its position as the most powerful country globally. Foreign aid makes a big difference to those people in emerging countries instead of harming or killing people and destroying the lands. To end extreme poverty worldwide in 20 years, the World Bank calculated that the total cost per year would be about $220 billion(approx.). This represents less than one percent of the combined income of the wealthiest countries in the world. But the question isn’t whether we can wipe out poverty; the right question is whether we can wipe out corruption, hate and, above all, greed from the system.

Even before COVID-19, baseline projections suggested that six per cent of the global population would still be living in extreme poverty in 2030, missing the target of ending poverty.

The fallout from the pandemic threatens to push over 70 million people into extreme poverty. Poor governance and corruption are not only ruinous for democracy, but it is also an obstacle to equality and corrodes opportunities for the poorest, who often shoulder a disproportionate share of the burden. The declining power of democratic forces all over the globe has led to governments spending more on weapons than on education, health, and the environment. The broad public must oppose these tendencies

About the Author
Surjit has lived in Canada for last 35 years. He has published all around the globe in more than 100 newspapers both in print and online, in addition to being blogger for many sites. HE's also the editor & publisher of Asia Metro News Magazine Toronto Canada
Related Topics
Related Posts