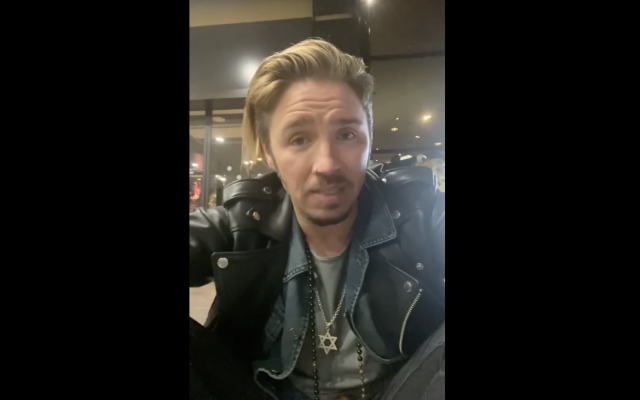 Gil Ofarim, a German-Israeli singer, said in a video posted to social media that he had been denied a hotel room in Leipzig, Germany, after being told to hide his Jewish star necklace. (Screenshot from Instagram video)

Something very odd is going on in Germany, as reports indicated on Sunday. Older Jewish News readers will recognise the surname ‘Ofarim’ as belonging to the 1960s singing duo, husband-and-wife Esther and Abi. Israeli-born and raised and then resident in Germany, the couple enjoyed brief worldwide success before fading into obscurity, to do whatever it is retired rock stars do after their moment in the sun.

Well, Abi, who died in 2018 (Esther is still going strong) got divorced and remarried (twice). And Gil Ofarim is the product of Abi’s third marriage, to Sandra: and Gil, following in the family footsteps, became an actor and musician. He is 39, so not a kid.

Gil Ofarim’s career in Germany has had its highs and lows: he won the German version of Strictly Come Dancing, he was revealed as the Grasshopper in Germany’s The Masked Singer. He is also said to have appeared in some widely criticised films.

So far, so mediocre: he is probably a decent enough dancer and a not wildly impressive actor. But that need not trouble us here.

Earlier this month, however, Gil rose to international notice with a video he posted of himself sitting on the pavement outside the Westin Hotel in Leipzig. He is wearing a very large and prominent Star of David on a long silver chain, and if you didn’t have any idea who he was, that is likely to be the first thing by which you would identify him.

And what he claims in this video is really shocking, given that this is Germany: he says he was standing in the hotel queue waiting to check in when he realised that people behind him were being beckoned forward to the reception desk. He then says that, when he protested, he was told by a Leipzig Westin receptionist that if he put away his Star of David, he would be attended to.

Although there was no one from the rest of the check-in queue backing the claim, there was an outcry.

The Westin management said it was taking his complaint very seriously and an investigation would begin. Police were informed. The Central Council for Jews in Germany weighed in and a group of Westin employees staged a solidarity with Gil protest outside the hotel, complete with stars of David and Islamic red crescents. There was condemnation from world Jewish bodies and Gil gave media interviews to express his disgust.

But… the hotel employee accused of discrimination against Gil has strenuously denied the singer’s version of events. Not only that, but he has now filed a defamation suit against him.

On Sunday, CCTV footage emerged of Gil leaving his parked car at the Westin in order to check in at the hotel. He is clearly wearing the same clothes as he is in his viral video… and there is no sign whatsoever of the Star of David.

Which means, I suppose, that he was either wearing it under his clothes and pugnaciously took it out while he stood in the check-in queue – or that he was not wearing it at all, and had a spat, for different reasons, with the Westin staff.

Obviously I have no means of knowing, at this distance, what really happened. But I sincerely hope that Gil has a very good explanation and that his story stands up, one of the very few occasions on which I find myself hoping that the antisemitism that he claims is actually correct.

He has already been quoted in one German paper as saying he now “can’t remember” whether he was actually wearing his Star of David or not. Things are febrile enough in Germany without manufactured crises. And we all need to be super-careful about claiming antisemitism – unless we are 100 percent sure – and there are witnesses.