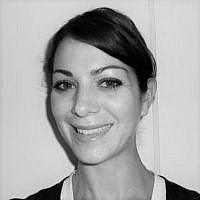 The Blogs
Lucinda Lees
Apply for a Blog
Advertisement
Please note that the posts on The Blogs are contributed by third parties. The opinions, facts and any media content in them are presented solely by the authors, and neither The Times of Israel nor its partners assume any responsibility for them. Please contact us in case of abuse. In case of abuse,
Report this post.

The film, “Who Will Write Our History” focuses on story of The Oneg Shabbt Archives, a vast collection of documents preserved within the Warsaw Ghetto under the direction of historian and archivist Emanuel Ringelblum.  These documents represent some of the most valuable documents of European Jewry during the Shoah, in terms of both their historicity and their larger meaning. They embody a corpus of text alive with the fullness, richness, and breadth of Jewish experience in the Warsaw Ghetto and beyond, and serve as a testament and accusation to the crimes of the Nazis and their collaborators. Moreover, their very existence is, in and of itself, an act of defiance in the face of extinction.  It cannot be said clearly enough that Dr. Emanuel Ringelblum’s work as an archivist with the Warsaw Ghetto was something truly remarkable. In collecting and sourcing documents he did something almost unthinkable given the circumstance; he thought beyond the walls, and he thought of a time beyond them.

To presage a future audience for the content he was so meticulously collecting was nearly revolutionary; it was to spit in the face of the daily evidence of annihilation and to willfully deny despair its corrosive and caustic due. Indeed, Dr. Ringeblum’s historian’s mind was uniquely suited to the task. As an archivist he understood the importance of collecting and documenting the mounting atrocities, as well as the varied lives of the Jews in the ghetto in all their minutiae- from the deeply personal to the political. The documents collected span the entire community; men, women, children, secular, religious, bundist, Zionist. While Dr. Ringelblum’s work was rooted in the ethics of his profession, he planted a seed for something much larger. The mere act of collecting these texts, saving the words of his fellow Jews, and encouraging fellow writers to keep working in the face of sure destruction, reflects an act defiance even larger than historical preservation.

In the Jewish faith there are few things more powerful than text. Indeed, It is with words that the entire universe is created. As the Torah opens with the story of creation we read “And God said, “Let there be light,” and there was light.” We read of a creative manifestation through God’s words; elements of the universe taking shape just by being named, and called into existence through acts of divine speech. It is clear within the first few sentences of Torah, to even a casual reader, that within our tradition words are powerful, creative, and holy. It is within this framework that we can begin to understand that the nature of actions of Dr. Emanuel Ringelblum have a resonance that supersedes plain notions of historical interest. By compiling the words of his fellow Jews, Dr. Ringleblum gives their voices new life, allowing the world of the Warsaw Ghetto to speak its existence to us even now. The simple canisters which held the Oneg Shabbat are like the Ghetto’s secular genizah, a compilation of community, where each word may be precious, and thus becomes a living link free of time.

It is through Dr. Ringleblum’s wide ranging archiving that works such as those of the Warsaw Ghetto Rebbe, Kalonymous Kalman Shapira were preserved. Shapira, a scholar of Jewish history well acquainted with the long arc of Jewish suffering, would go so far as to describe what he witnessed in the Ghetto as “unprecedented and unparalleled”. Yet it is within the context of this horror that both Rebbe Shapira and Dr. Ringelblum continue, each in their own ways, serving their community, writing, teaching and collecting. Faith in the meaning of their work uniting the work of secular man and the religious one across disciplines- and eventually uniting them physically in body of the archive. The creative, defiant, and holy power of text raises up their voices and those of their fellow Jews out of the ash and rubble of the ghetto to construct an indelible monument of living testimony. Each letter seemingly reanimates its writer anew, connecting past to a continual presence. The archive is not simply a locus of memory, or history, but in its defiant inception which negated death at all costs, it is a reflection of the act of survival, and its contents are like a warm fingerprint, to be read and investigated with the urgency of life itself.

About the Author
Lucinda Lees holds BA in Fine Arts, and is an RN, MS. She is a lifelong writer.
Comments