The Blogs
Batya Ivry-Friedman
Apply for a Blog
Please note that the posts on The Blogs are contributed by third parties. The opinions, facts and any media content in them are presented solely by the authors, and neither The Times of Israel nor its partners assume any responsibility for them. Please contact us in case of abuse. In case of abuse,
Report this post.

I cried as I watched my baby’s hair being cut.  Sure, it was a celebration and it was meaningful.  But as I watched, with tears in my eyes, the last three years and all those memories flashed through my mind.

We weren’t always certain we were going to perform this ritual.  A number of friends had expressed their scepticism, saying that the custom was quite new, and not prevalent amongst all Jews.  But for us, it was an opportunity to sanctify a moment in time.  To take the mundane and elevate it to the sacred.

What are the origins of the traditional hair-cutting ceremony?  The Torah tells us that for three years a tree must be allowed to ripen before its fruits are harvested.  In the fourth year, the fruits are taken to Jerusalem to be consumed amidst a joyful ceremony of thanksgiving.

In exile, we’re unable to fulfil this mitzvah, and so the haircutting ritual reminds us of our ancient rites.  Is it an intrinsically holy act?  Perhaps not.  But, like most things in this world, holiness is in our hands to create.  When we take a mundane act and infuse it with meaning, we elevate and sanctify this world.

More and more families have now adopted this custom.  What better way to mark such an auspicious time than to offer up those fruits of the fourth year upon the altar of kindness and benevolence?

While there are those who question the wisdom of engaging in new-fangled rituals, let’s be honest.  It wasn’t until very recently that we even began to celebrate this important milestone.  Consequently, we’re still figuring out the most meaningful way to mark the occasion.  For us, the event symbolized a coming-of-age moment when our child was no longer purely a recipient of the generosity of others, but had attained a level of maturity to begin to contribute and benefit others.

What better symbol of benevolence than the contribution of one’s very essence to help out another human being experiencing unimaginable pain and suffering?

And so, off we went, with mixed emotions of trepidation, awe, and joy, to cut the hair and donate it to a cancer patient in Israel.  And, like the priests of yore, we sharpened our tools, and engaged in the holy act of the opshernta, also known as the chalukta.  Our child understood the importance of this sacred moment.  Sitting there upon her throne of glory, she knew this was an important act, a vital part of marking her milestone. We prayed silently as the priestess solemnly prepared her hair for this special mitzvah.

Like so many other bat mitzvah girls before her, she carried out the great melachot of keshirah (tying) and keliah (braiding), prior to the sacred haircutting.  Each strand was lovingly placed into a ‘tefillah zekel’ – a prayer satchel – specially prepared for this occasion, with Yemima’s name embroidered upon it.  On this occasion, there was no need for last names. When the hair would eventually reach its recipient, all they needed to know was that a little girl celebrating her bat mitzvah was thinking about her ordeal and praying for her refuah.  In turn, they could offer a prayer of thanksgiving to Hashem for the love and care Am Yisrael has for one another.

Hair represents beauty and deep connection.  Decades later, I remember the harrowing feeling of removing my long, flowing locks, and wearing my hair short for a period.  It was my choice, but it didn’t make it any less painful.  A woman’s hair is an essential element of who she is.  It’s a big step to share a part of your essence with another human being, a stranger no less.  Yemima will never meet her opshernta recipient, but they will be bound together for eternity.

Is the opshernta for every bat mitzvah girl? Not necessarily. Maybe that’s why some spell it ‘option’ta’ – it’s another option amongst many that our b’not mitzvah now have to mark their special day in a way that is truly meaningful, and does not simply mimic what the boys are doing.  Jewish women have always been synonymous with the pillar of gemilut chasadim and there are abundant chesed opportunities and possibilities available to each bat mitzvah girl. 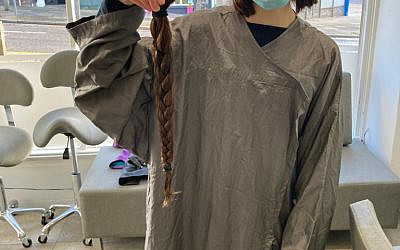 As she enters the covenant of Jewish womanhood, I pray that Hashem bless Yemima with a heart filled with kindness and a desire to spread joy and benevolence throughout her life!

About the Author
Rabbanit Batya Friedman is the senior rebbetzin of Hamsptead Garden Suburb Synagogue in London, UK. She was born and raised in Brooklyn, NY. She received her Bachelor of Science in Mathematics from Brooklyn College and her MBA from the University of Alberta. She previously served the community in Edmonton, AB Canada.
Related Topics
Related Posts
Comments