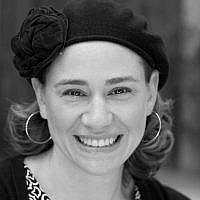 The coronavirus pandemic is unfortunately exacerbating another, hidden crisis: Violence against women. Two women were murdered by their husbands in Israel over the past two weeks and five in total since the beginning of the corona crisis. One tends to think this does not affect them or those they know, but unfortunately it can. What responsibility does Israeli society have toward these victims? This week’s parsha has an insight into this question.

Parshat Emor warns against the danger of aggression, hatred and violence for individuals and society. In one of the few narratives in the book of Vayikra (Leviticus) there is a story of a man who commits blasphemy. This tale is short and seems to lack context, leading biblical commentaries to suggest various theories of the source of this man’s anger. The most convincing of the suggestions is that he had lost a case in court where he was fighting for the right to inherit land and then picked a fight with an Israelite man (possibly coming to blows). The midrash identifies him as the son of an Israelite woman and the Egyptian taskmaster who Moshe had killed for beating a Jewish man in Egypt. Both Moshe and this blasphemer struggled with the question of identity and belonging. Moshe chose his Israelite origins and defended the weak against the oppressed. The blasphemer, whose origins created unfortunate limitations, let his hate and anger fester and committed a grievous crime in the biblical world: cursing God.

The Talmudic rabbis understood that this sort of hate was contagious. They even euphemistically refer to blasphemy as “birkat Hashem,” blessing God, suggesting that even uttering such words can have a negative impact on a person. Moreover, Maimonides teaches that one who hears blasphemy must do kriyah, a sign of mourning, symbolizing the gravity of this prohibition.

One unusual feature of this biblical narrative is that all who heard this man’s blasphemy had to place their hands on the blasphemer’s head before he was executed (the biblical punishment for this crime). One commentary explains that this is to compensate for the effects that hearing such profanity may have had on the listeners. Just in case they internalized the littlest of this man’s hate or rage they had to symbolically atone for it.

Elie Weisel, who knew better than most how to overcome feelings of hate said, “Hate is contagious… Ultimately hate is both destructive and self-destructive.” Today, hate speech and hate crimes are on the rise and what tends to follow is acts of violence. Women and children in domestic abuse situations are currently experiencing a double pandemic: the coronavirus and the hidden, less discussed struggle to stay physically safe. The blasphemer’s story is a reminder that the whole country has an obligation to acknowledge these terrible tragedies and to consider ways that society can do its part to be more sensitive to and atone for such violent injustice. 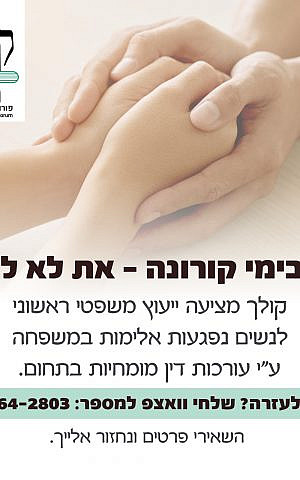 Kolech’s new domestic abuse hotline
About the Author
Karen Miller Jackson is a Jewish educator and Morah l'Halakha living in Ra'anana, Israel. She teaches and studies at Matan HaSharon and is the creator of Power Parsha, a short weekly whatsapp dvar Torah. She runs Kivun l'Sherut, a guidance program for girls before sherut leumi/army service and is a board member of Kolech - Religious Women's Forum.
Related Topics
Related Posts
Comments