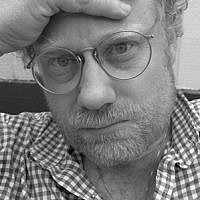 The Blogs
Jason Francisco
Apply for a Blog
Please note that the posts on The Blogs are contributed by third parties. The opinions, facts and any media content in them are presented solely by the authors, and neither The Times of Israel nor its partners assume any responsibility for them. Please contact us in case of abuse. In case of abuse,
Report this post. 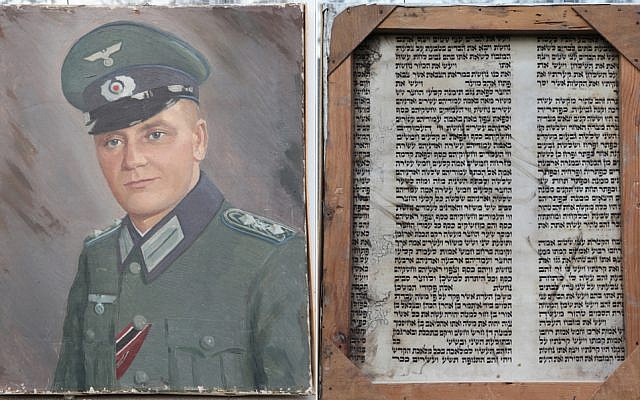 The painting of Alfred Mayer. On the right is a view of the back of the painting -- a section of Torah scroll. (photo credit: courtesy)

In January 2011, a pair of unique objects turned up in the ancient university town of Tübingen, Germany, when a Christian theology instructor and his wife bought a new apartment, occupied by an elderly, reclusive man. Shortly after the purchase, the man died, and his possessions fell into the hands of the new owners. Among these possessions were two original oil paintings depicting a uniformed Nazi German soldier and his wife.

On removing the paintings from the walls, the new owners discovered that these likenesses were painted on the back of sections of Torah scrolls. The texts of the scrolls were perfectly legible. One could clearly read from Sefer Shemot, parshiyot Ki Tissa and Vayakhel (Exodus 34:9-35:16), and from parshiyot Vayakhel and Pekudei (Exodus 37:13-39:6).

The paintings depict Alfred Mayer and Hedwig Mayer, the parents of the deceased tenant, Heinrich Mayer. Alfred Mayer was an electrician originally from Stuttgart, who served in the Wehrmacht from fall 1939-spring 1945, attaining the rank of sergeant first class. Formally recognized as a master mechanic, he was decorated with the War Merit Cross for his service on the Soviet front in the winter of 1942.

The origin and age of the Torah fragments bearing Mayer’s and his wife’s likenesses have not been determined, though it appears that the two sections came from the same scroll. Likewise, the precise date of the paintings is unknown. The identity of the artist also remains unknown, as does the question of how Mayer or the artist came into possession of the scrolls. What is certain is that the painter did not work from life, but from photographs Mayer provided him, which have been discovered among Mayer’s negatives and prints. 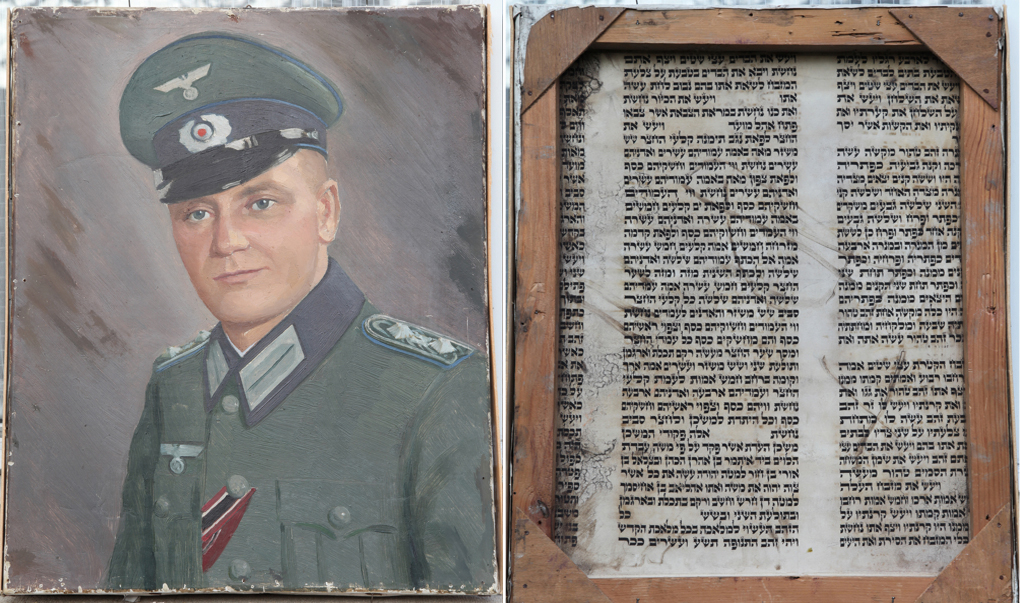 The painting of Alfred Mayer. On the right is a view of the back of the painting — a section of Torah scroll. Click to view full size. (photo credit: courtesy)

What to do with the discovery was not at first clear. The owners considered many options, including donating them to a local museum, to a synagogue or a Jewish community in Germany, or possibly ritually burying them. I came to know of them not long after their discovery, and strongly favored some form of public display. It seemed to me that when they were part of intact Torah scrolls, these objects contributed to one sort of teaching, and having been violated in an uncommon way – defaced precisely by being enfaced – they now promised a different and no less relevant teaching.

When I brought the objects to the attention of Jakub Nowakowski, Director of the Galicia Jewish Museum in Kraków, he recognized their uniqueness and was immediately interested in an exhibition. Ultimately the owners elected to donate to the pieces to the state historical museum in Stuttgart, which agreed, in turn, to lend them to the Galicia Jewish Museum.

The Galicia Jewish Museum invited me to lead the curatorial team that would develop the exhibition. The show we have created is unusual. The team agreed that our task was not to curate the objects so much as responses (and relationships) to them, and we conceived of a guided encounter with them as the multifaceted and contradictory things that they are. Specifically, our goal was to bring visitors into an awareness of at least four aspects of the scroll-portraits: as relics, icons, texts, and symbols.

As relics, they are unusual in that they fuse together the cultural remains of victims and perpetrators, becoming objects of veneration that emphatically cannot be venerated – relics that are also anti-relics.

As icons, the idealized, albeit poorly painted images of the two Germans recall the “banality of evil,” to use Hannah Arendt’s famous phrase. At the same time, they call to mind other images of the genocide and its aftermath, visions as raw and violent as the portraits are stylized and controlled.

As texts, the Torah portions interrogate the images, and vice-versa. By a remarkable coincidence, one of the texts contains the dramatic passage in which God commits to an eternal covenant with the Jewish people through Moses, and the other contains the detailed instructions given to the master artist Bezalel for the construction of the menorah.

As symbols of conquest and survival, these scroll-paintings concentrate within themselves enormous contradictions: between the heights of Jewish religious and ethical teaching and the abysses of Nazi crimes, between promise and futility, specificity and ambiguity, remembrance and the effacement of memory, the coupling and decoupling of the visible and the invisible, the sayable and the unsayable, and other polarities.

The team at the Galicia Jewish Museum recognized many dangers in presenting these objects. It is imperative, of course, not to honor the murderers unintentionally. It is equally imperative that the museum remain a space in which visitors can expect not to be tormented, which is of course different from  being challenged. In Kraków, we solicited opinions from Rabbis Boaz Pash and Tanya Segal, representing Orthodox and progressive perspectives, respectively, and both affirmed that public exhibition of these objects is religiously legitimate in their judgment, and more – that the exhibition stands to make a salient contribution to remembrance of the Shoah in the heart of Poland. 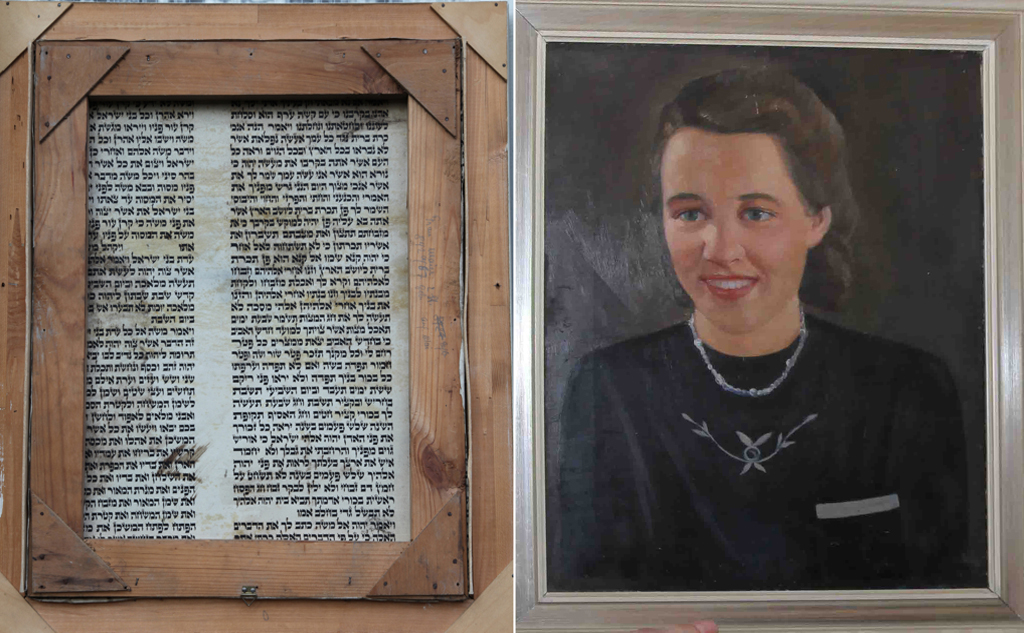 The painting of Hedwig Mayer. On the left is a view of the back of the painting — a section of Torah scroll. Click to view full size. (photo credit: courtesy)

The exhibition design that we developed attempts to avoid unwanted outcomes by situating the objects in a rich interpretative environment. The exhibition opens with the basic context for viewing the objects: a brief historical overview of the Shoah, an explanation of Torah, and a short account of the discovery of these objects. Moving around a partition, visitors directly encounter the recovered objects, which are visible from both sides.

On the walls surrounding the objects are translations of the Torah fragments in Polish, English and German, as well as short, open-ended questions for reflection, also in three languages. Between the objects and the walls are a series of listening stations containing audio responses from distinct perspectives, communities, nationalities and age groups: Jews, Catholics, Protestants, secular humanists, Poles, Germans, Americans, Israelis, old, young, famous scholars, and non-specialists in Jewish and Polish history.

The final section of the show presents an illustrated wall text that raises deeper philosophical and historical complications surrounding the objects, as well as touch-screens containing extended segments of the interviews from the middle room, now including the faces of the interviewees. Finally, in the effort to hand the interpretive task forward, we invite visitors to make video recordings of their own responses, which are continuously uploaded to the adjacent touch screens.

To our knowledge, this exhibition will be the first time that any such objects will be exhibited in Poland, and the Polish context is essential to the exhibition’s power. Kraków’s Kazimierz district, home of the Galicia Jewish Museum, was famous as a Jewish community from the 14th century through the Second World War, and today is the best preserved Jewish town in Europe. Less than an hour’s drive from Auschwitz, it is one of the key locations in Europe where the Shoah is encountered and taught.

As an American Jew, it is clear to me – but bears repeating – that the Shoah is more than a Jewish inheritance. It is a Polish, a German and an international one as well. I see this exhibition as creating an intersection of engagement around a highly unusual relic and symbol of the genocide, much as the Galicia Jewish Museum itself functions as a crossroads where new understandings of the Jewish past in Poland can emerge.

On the Other Side of the Torah: Wartime Portraits from Tübingen
Galicia Jewish Museum, Kraków, 6 September — 6 November 2012

About the Author
Jason Francisco is an acclaimed photographer, essayist and critic. He is the author of "Far from Zion: Jews, Diaspora, Memory" (Stanford University Press, 2006), and "The Steerage and Alfred Stieglitz," (University of California Press, 2012), as well as numerous essays, reviews, and artist’s books. He teaches at Emory University and Stanford University.
Comments