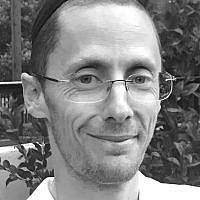 The Blogs
Steven Romain
Rabbi and writer
Apply for a Blog
Advertisement
Please note that the posts on The Blogs are contributed by third parties. The opinions, facts and any media content in them are presented solely by the authors, and neither The Times of Israel nor its partners assume any responsibility for them. Please contact us in case of abuse. In case of abuse,
Report this post.

If you’re so involved in intellectual activities that you forget you’re attached to a body, you are likely to meet up with a harsh wake-up call. I discovered this during my first yeshiva years, when I took myself woefully to a pharmacist, one Sunday morning, to show her the strange spots which had begun to appear all over my arms. After taking a look, she offered a disarmingly simple diagnosis: “You have to eat vegetables every day”. Similarly, if you live your life under the conviction that, since your community is religious, the sex drive is nowhere to be found among you, your children will sooner or later run into some very compelling questions.

One of our greatest sages testifies in the Talmud that he does not believe he would have stood up to the test of being left alone on a desert road with a young woman. Our spiritual heroes knew it was no embarrassment to be born with a body, with all its various impulses. And, on the contrary, the Talmud states that, the greater the spiritual status of the man, the greater the yetzer hora (even in the area of sexuality). The Talmud and the Shulchan Aruch speak about sex with the same mundanity you’d find in a how-to manual. We are told exactly when we may remain in a room together with a member of the opposite sex, exactly which parts of his own body a man should avoid handling, as well as some good practical advice on how to keep one’s thoughts from wandering in troublesome directions.

Even the young cheder student learns mishnayos that teach the laws about the “girl who is afflicted” in the fields. I, for my small part, see a lot of good in speaking about the realities of life to kids, (each according to his particular emotional and intellectual level). When a little boy learns about the “wayward son”, who is stoned to death for his unruly behaviour, he absorbs a significant message: “A human being can truly come to waste his life, if he’s not careful. And I could too, unless I’m careful”. Similarly with regard to sexual topics, as long the presentation is done appropriately, a child gets the message: “This is a part of man. This is a part of me that, one day, I will better understand.”

I was very affected, in general, by an interview I saw with Holocaust survivor Tova Friedman. One thing that struck me in particular was when she said she thinks the only reason she turned out somewhat “normal” (and she does seem to be a well-balanced individual) was that her mother talked her through everything that was happening, honestly and openly. She was only 4 years old at the time the Nazis started shooting the people standing with her and her mother in a town square. When they stopped shooting, her mother whispered in her ear, “Now, they’ve run out ammunition. They’re probably going to find some other way to kill us.” Tova was so impressionable at the time, that she remembers believing all adults were dressed in riding pants and black boots, and angrily insisted that people abide by a set of elusive rules. And she came out “normal” from seeing things in real life you wouldn’t see in your worst nightmares. And she attributes this to honesty – her mother’s honesty about the facts of life that were surrounding her.

Rav Shimshon Rafael Hirsch says there could be no worse service you could do your children than cutting them off from the realities of life. If you prevent your child from ever leaving the house, for fear he’ll catch a chill, then, the first time he’s exposed to the feeblest virus, his system won’t be able to take it. All this makes me wonder with respect to the attitude to sexuality in our religious communities. Since this is certainly a reality of life kids will have to face, and since our Talmud doesn’t show any shame when it comes to talking about it, why do we? My Rosh Yeshiva used to say, “Where do you think it’s best your kids learn about romantic affection, from you or on the streets?”.

The one person whose name we avoid saying, says the Talmud, is Acher – “The Other One”: the sage who descended from the high plateaus of Torah knowledge and purity to cast off the yoke of Heaven entirely. The reason is that we need to drive home to ourselves the horrific nature of that choice. But another man, who devoted himself to expanding the geographic scope of his sexual immorality by the day, is openly named. The Torah, and our sages, do not shy away from mentioning sin. The sins of our eternal role-models are mentioned explicitly in the Torah. On the contrary, there is a lot to be learned from analyzing a sin. Perhaps the next guy who comes along will be saved from it. Acher was different: for someone who lived in the heights of holiness and spiritual sensitivity – who could see the vistas of perfection in the Torah denied to most of our eyes, how all the upper worlds depend on the Jews’ fulfilment of the Torah’s laws – to choose to just throw it all away, was deplorable.

I, therefore, disagree with a certain Rabbi who suggested we forget about the nastiness of the Chaim Walder affair and “let him rest in peace”. Why shy away from this reality? The fact that sexual crimes happen in the religious community shows that we are human, not that we are a bunch of criminals. I would suggest to the Rav that he need not be so afraid that people speak about sex happening in the religious community. And here’s why: the reason Walder’s crimes should be remembered and condemned is not that they were sexual. It is that, for someone who grew up in a community of Torah observance and who actually came to represent that community, to do what he did is comparable to what Acher did. Walder didn’t stumble once in his battle with his evil inclination. He engaged in a sustained, planned program of sexual victimization over years. The sins he committed carry a penalty of both kares (spiritual excision) and chenek (death by strangling). This choice – repeated and affirmed a hundred times – is what’s reprehensible here. Would the Rav say about a serial rapist captured by the police, who then hangs himself in prison, “Let him rest in peace”? I would further suggest to the Rav Shlita that he start talking to his own children about sex. They still have a chance to grow up to become normal and unashamed on the subject, the way the Torah prescribes.

Too often, kids end up with the kinds of questions that one of my Rabbis once faced. “How come we have to wear pe’os, Abba, and you don’t?” they asked. “There are answers to that”, he said. “None comes to mind, but there are answers to that.” When kids start to feel the real power of sexuality and see that the Torah doesn’t sweep the topic under the carpet, they will inevitably ask: “Why don’t we talk about this, Abba?”. “Some day, son, I’ll explain to you”. Similarly in another case: 99.95% of the halachic authorities for the past three hundred years say sheitls are forbidden by Torah Law. “Why does Ima wear one, then?”. “Some day, son. Some day…”

And I’ll mention what might be a reason many people feel terrified of talking about sex. For a man, at least, it’s like a volcano. Rather than resist its force, he had better devote himself to ensure it’s properly channeled and that no one gets hurt. (Which Ima should keep in mind, by the way, as she adjusts her sheitl tomorrow morning). It’s the reality which no man can avoid, and the important point is this: it inevitably leads to a very difficult decision with very serious consequences. For every boy and man, it comes down to the question of, “Will I fight the good fight or not?” And the sins that come as a result of this force are definitely among the most serious of all. Suffice it to say that a man would have to die rather than give inappropriate expression to his sexuality, even without doing the act itself. There’s nothing more grounding than sexuality. It’s the point at which being religious stops being a question of the shade of your shirt, and becomes one of, “Do I have enough fear of Heaven to withstand this trial?” Perhaps, certain members of our community feel uncomfortable with religiosity becoming so intrusive. It’s much pleasanter if you’re called religious for voting for the right candidate, or, say, for your skill in making that sound with your tongue and upper front teeth that signifies exasperation. After all, a bit of practice in this area can go a long way.

About the Author
Born in Cape Town, Steven spent twelve years in Israel, studying mostly at Yeshivas Birkas HaTorah in the Old City of Jerusalem, but also at Mir and Or Someach. At Birkas HaTorah, he earned smicha, and then again at Or Someach. On return to South Africa he earned an MA in English Literature from University of The Witwatersrand on the work of Rudyard Kipling. He has written an acclaimed e-novel titled "True-Life Walter" about the socio-political situation in South Africa.
Related Topics
Related Posts
Comments