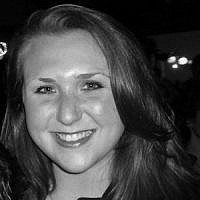 The Blogs
Lena Glaser
Apply for a Blog
Advertisement
Please note that the posts on The Blogs are contributed by third parties. The opinions, facts and any media content in them are presented solely by the authors, and neither The Times of Israel nor its partners assume any responsibility for them. Please contact us in case of abuse. In case of abuse,
Report this post.

As an Israeli living abroad, being able to stream Galgalatz is a treat. It allows me to stay connected to my home, friends, and family; even from halfway across the world. It also allows me that great mix of Israeli music and incredibly out-of date American tunes. But this simple, and often humorous, pleasure became a horror for me this week, when almost every other song has been interrupted by the DJ to announce there has been yet another rocket attack somewhere in Israel. This is the new reality.

The pain of watching my home collapse into this seemingly never-ending cycle of violence and despair, from the other side of the globe, is heart wrenching. Now I’m stuck following the Times of Israel live-blog and waiting for the Red Alert app to go off (thank goodness for modern technology), which leads me to immediately text friends and family to see if they made it to a MAMAD safely and are okay. This is today’s reality.

Talking about Israel is never an easy task, especially during times like these. You have hardliners on each side, people totally oblivious to the current situation, those who don’t even know where Israel is on a map, and then you have those who are so ill-informed, that they post the first thoughts in their heads after reading one article about the conflict. It doesn’t matter your political affiliation or even your location; this is the reality in the time of social media.

I was lucky enough to move to NYC with a cadre of my closest friends from Israel, allowing for free-flowing and informed conversations (especially since we all studied for our MA together in diplomacy and conflict studies at IDC Herzliya). The past few weeks, our group texts, dinners, and time together have all been spent discussing Israel. Today, as we checked on our friends and family in Tel Aviv after Iron Dome intercepted a rocket, literally, right above their heads, my friend Morris was able to express the pain we all are feeling in a way I had been unable to. As he wrote to us, “It has become so frustrating to see places we have such fond memories of become desecrated with fear and death.” This is their reality.

There is no better way to describe this. It is a feeling that everyone around the world, who has that connection to Israel, knows. It doesn’t matter if you are secular, Orthodox, Reform, Hassidic, left, right, or center – we all are pained by what is happening in our home, and we all go to bed at night praying for peace. This is our reality.

Until then, I’ll continue to have Galgalatz on, listening for the DJ to alert me to a rocket attack so I can check in on my friends and family. Because I know I won’t sleep through the night until they can. This is my reality.

About the Author
Lena Glaser is an American-Israeli who currently lives in New York City. She received her MA in Diplomacy and Conflict Studies from IDC Herzliya, and her BA in Religion and Peace & Justice Studies from Wellesley College. She currently works for the Brennan Center for Justice at NYU School of Law.
Related Topics
Related Posts
Comments