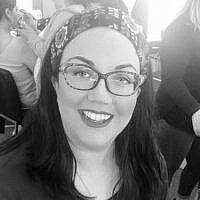 The Blogs
Chavi Stashevski
Apply for a Blog
Advertisement
Please note that the posts on The Blogs are contributed by third parties. The opinions, facts and any media content in them are presented solely by the authors, and neither The Times of Israel nor its partners assume any responsibility for them. Please contact us in case of abuse. In case of abuse,
Report this post.

Abraham bore two sons: Yitzchak through Sarah and Ishmael through Hagar. The Jewish People are descendants of Yitzchak and the Arabs are descendants of Ishmael. Arabs were around way before Islam came into play. So how could there be Arabs before Ishmael had established Islam? The word Arab comes from the word Arava, or “open space”. The Aravim were people of the open space, of the desert. People of the desert could have been any people. So how did these people who are supposed to Ishmaelites, become Arabs and then Palestinians? How have such ancient peoples transformed three times? What is with these inconsistencies? Abraham’s children were promised abundance and prosperity. The sons of Yitzchak received this promised prosperity and so have the sons of Ishmael.

What the “Palestinian” People are claiming is that they were living in the Holy Land after the Roman conquest. They claim their name from the term the Romans gave Judea after they beat Bar Kohva and his sons. The Romans called it “Palestina-Syria” because they connected the Province of Syria with Judea which they termed Palaestina. When the British took over the land they named it Palestine. All the native peoples living on that land when it was named Palestine are “Palestinians”, both Arab and Jewish. There were Jewish People on this land during this time as well. So this claim over Palestine is a claim that goes both ways. The land of Abraham belongs to both groups of indigenous peoples.

At the establishment of Israel in 1948, the Arabs didn’t refer to themselves as “Palestinian” people. Even in the war with Egypt in 1956, there were no such people. Suddenly in 1967, these people came to be. While they were relabeling themselves, why didn’t they give themselves a better name that correlated with the history of the place they claimed was theirs?  If they wanted to be more accurate, they should have named themselves the Palaestina-Syrians. A better name would have been “Palesyrians”.

In 1967, Moshe Dayan said to Ariel Sharon on a trip to the Galil, “As long as there are Arabs in this country, it is possible for us to live here. If we would only stand guard, we can be in this land. If we for a moment sink in complicity, become self-satisfied, if we lose our focus for a moment to pay the precious price for our existence here, we will lose”.  In 1967, during the 6-day war, the IDF won back Gaza. And here the fight for Israel’s existence really began, as the Arabs became furious, mostly at themselves for starting a war with so many miracles, which caused them to lose their honor for the third consecutive time. Gaza back then was under Egyptian control. When Israel won Gaza, the Governor of Egypt, General Husseini, signed the surrender to Israel. During 1967, Israel also received control of Har Habayit, which the Arabs call Al-Aqsa. It was a momentous time for our young country, as Jerusalem was in our hands. Israeli ships were able to enter the straights of Tiran after it was in their hands, as well as the Sinai Peninsula. In the North, they had the Ramat Hagolan which the Syrians surrendered and the war was over.

The bottom line here is that the Arabs attacked, Israel won, they lost their land and their honor, and the way they are trying to reclaim the land they lost is through their desperation, is through terror, kidnapping, blowing up busses, and through the thought that they can gain this land without the existence of Jews on this land. It goes on until today. After the 1967 war is when they started blowing up places in Israel. In 1968 they blew up the Tachana Hamerkazit in Tel Aviv, a car was blown up in Shuk Machane Yehuda, and more mass attacks in years to come.

In 1969, Golda Meir became the first (and only) female Prime Minister in Israel. She said that “she hated the Arabs for making us fight against them”. She also made it clear that there was no such thing as a Palestinian People. It was them wanting to be anybody when it was clear that Israel was already a somebody. After the Yom Kippur War with Egypt, Sadaat came to Jerusalem in 1977 to discuss peace, not with her but rather with Menachem Begin. To Golda’s shock, Begin agreed to recognize the existence of the Palestinian People, because she didn’t believe in their existence. So, in fact, we recognized these people years ago, and yet, how are they still refugees?

The Palestinian Refugees according to Wikipedia

There is so much freedom given to Arabs on this land. The problem isn’t the Israelis, it’s the Palestinian Delusion that Arabs can own this land without the Jewish People existing on it. It’s the land of Abraham and his two sons have claims to it. One can’t exist without the other. Once both sides will come to realize this, there will be co-existence, which in my view, more than the word Peace, there needs to be coexistence between the two people.

About the Author
If the whole world hates Israel, therefore Israel must be doing something right.
Comments