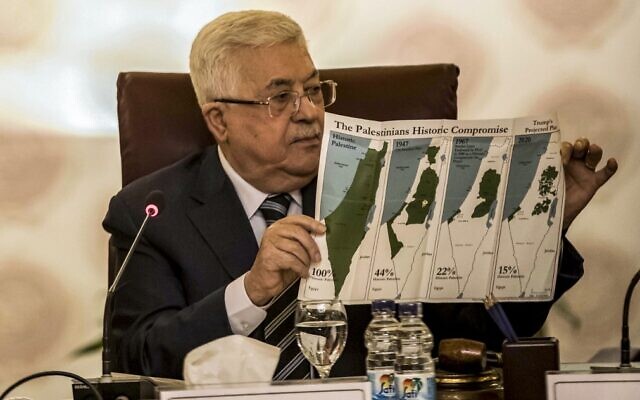 Palestinian president Mahmoud Abbas attends an Arab League emergency meeting discussing the US-brokered proposal for a settlement of the Middle East conflict at the league headquarters in Cairo on February 1, 2020. (Khaled DESOUKI / AFP)

What is essential to Israel surviving is a separation from the Palestinians executed in a manner that minimizes security risks and allows the Palestinians enough independence, prosperity and dignity to calm them down. It might also enable all but the most extreme elements in the Arab world to accommodate themselves to Israel’s existence; this is real long-term security for Israel.

The Trump proposal can achieve neither peace nor any such accommodation. It rather drags Israel closer to a future in which it is replaced by a binational entity that will initially not be democratic, ultimately not be Jewish, and never know a day of peace.

That is because the proposal does not create separation between Israel and the Palestinians. Rather, by allowing Israel to annex all the settlements, it creates a single-state dynamic and leads to single-state reality.

Proponents of annexation say it would not add Palestinians to Israel. But with the settlements dotting most of the West Bank, annexing them all creates such a preposterous jumble that any child can see it will not work as a partition. Pockets of conveniently non-annexed Palestinian towns surrounded by Israel on all sides, connected to each other by bridges and tunnels and chewing gum, do not partition make.

The map rather looks very much like the Bantustans of apartheid South Africa, which few took seriously and which have vanished from the earth. It looks like a trick to take the land without the people. It looks like a ploy to deny the Palestinians rights.

But as separation becomes impossible the Palestinians will demand just that: they will disband the Palestinian Authority and ask for full annexation of the territory, without games and with citizenship. What exactly will Israel, the Middle East’s only democracy, say then? That it doesn’t want the Palestinians, after it filled their territory with towns and villages and roads and farms and wineries and a university?

In my previous career as a foreign correspondent I met and interviewed Yasser Arafat numerous times, as well as Ahmed Qureia and Saeb Erekat and countless others. There is no question in my mind that the Palestinians were never in a hurry to accept Israeli peace offers they viewed as inadequate because this is a very acceptable Plan B. In their narrative they feel that if Israel is stupid enough to not accept a partition that gives it 78% of historic Palestine (which is to say, the pre-‘67 borders), then the Palestinians will be happy with sharing 100% on equal terms.

Hints of this were already heard in recent days’ statements by Mahmoud Abbas and others. In Cairo this weekend he threatened to cut off security cooperation and all ties and said Israel will have to “bear responsibility as an occupying power.”

The partition option has been distressed ever since Israelis accepted the narrative that says the Palestinians rejected reasonable deals proposed first by Ehud Barak in 2001 and then by Ehud Olmert in 2008 (I basically agree that they did and that it was a mistake). What’s left of the partition hope depends on the possibility that the center-left-Arabs bloc can soon win an election. The upcoming March 2 elections in Israel may be the last hope, because things are moving fast and two elements of this bloc are not dependable:

The Trump proposal is far from the “Deal of the Century,” the label dutifully adopted by clueless Israeli journalists. It is a one-sided document that adopts the position of the Israeli right wing, humiliates the Palestinians and is a non-starter for anyone fair-minded.

I think the plan does get some things right: Jerusalem cannot be physically partitioned and the descendants of refugees cannot return to what is now Israel. But if the Palestinians can be nudged toward practicality on such issues, it will not be by imposition and humiliation. It will be through creativity, respect, dialogue, and generous compensation.

You don’t have to be a cynic to think the real purpose of last week’s extravaganza was to help Benjamin Netanyahu at the polls. The timing is spectacularly transparent. That little scheme may well succeed, but it’s a double-edged sword: in one of the great mysteries of recent history, this otherwise brilliant man is the unwitting undertaker of the Zionist cause he obsessively would champion. 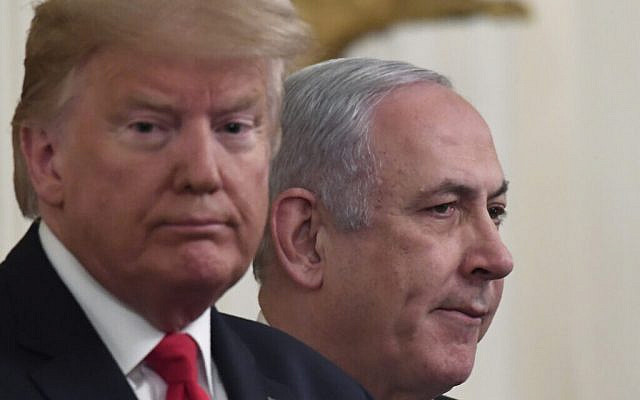 Unwitting undertakers (AP Photo)
About the Author
Dan Perry, a media and tech innovator, was the Cairo-based Middle East Editor of the AP, and chairman of the Foreign Press Association in Israel. Previously he led AP in Europe, Africa and the Caribbean. Follow him at: twitter.com/perry_dan www.linkedin.com/in/danperry1 www.instagram.com/danperry63 https://www.facebook.com/DanPerryWriter/
Related Topics
Related Posts
Comments