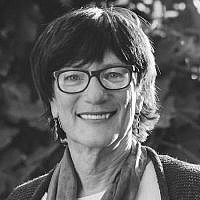 The Blogs
Yiscah Smith
Apply for a Blog
Advertisement
Please note that the posts on The Blogs are contributed by third parties. The opinions, facts and any media content in them are presented solely by the authors, and neither The Times of Israel nor its partners assume any responsibility for them. Please contact us in case of abuse. In case of abuse,
Report this post.

It’s around 5:15 and I just finished teaching the last of several classes at the Conservative Yeshiva’s 2015 Summer Program. As a matter of fact, this class, spiritual insights into the weekly Torah portion, concluded the entire 6 week program.

We explored a teaching from the 5th Lubavitcher Rebbe, the Rebbe Rashab, who explained that when G-d created the world, part of what He/She introduced into creation was plurality – the infinite diverse expressions found in creation. Depending on the choices humans make, the diversity within plurality can lead to divisiveness and strife — or not. We humans have been blessed by our Creator to develop plurality into a state of harmony. As with a symphony, each instrument maintaining its integrity to its individual diverse sound, but when played together “on the same page” produces a unique sound beyond the sum total of the various instruments.

In this weekly Torah portion what better expresses this sentiment than the phrase “Hear oh Israel, the Lord is our God, the Lord is One” — the “Shema.”   The one statement that the Jewish tradition proclaims expresses the essence of how to go about living in the world, living a life dedicated to revealing the Divine spark in all of creation, ourselves and in each other. Truly embracing diversity, honoring diversity and finding harmony within the myriads of expressions of the One Divine Creator.

I concluded by mentioning how it was Divine Providence that the Jerusalem annual LGBT Pride and Tolerance march was about to begin at Independence Park, directly across the street. In the spirit of revealing the One among the diverse many, several students went across the street as the march was about to begin. I myself joined the group and felt so blessed to have explored such an inspiring Torah teaching in how to navigate one’s life journey in our world of plurality: forever remaining intentional in revealing the Oneness through harmony.

As the March began I found myself more towards the rear and remarked to some of my students how the mood had changed so much over the years. There were very few protestors and the march included several groups who advertised that they were straight and supportive — and that some were religious.

At one point several young women from Bat Kol, the religious lesbian group in Israel, distributed sets of candles with a card that included the appropriate blessing and the different times to light the candles in honor of the Sabbath in various cities throughout Israel the next day, Friday, the Eve of the Shabbat. I recalled how the Lubavitcher Rebbe, may his memory be for a blessing, introduced this “campaign” in the 1970’s as a way of literally infusing the world with more light. And that is exactly what these women were doing in 2015 in Jerusalem at the LGBT Pride and Tolerance March.

As I put a period to my calm and joyous thoughts, all of a sudden I heard sirens and saw ambulances, police cars and police on horses rushing to the front of the march. In addition several police were literally running on foot. It did not take too much longer to realize what happened, as I passed several of the victims on the street as they were being brought into the waiting ambulances.

At that moment, I felt immersed in a stark paradox — vacillating between opposites. Minutes ago I was surrounded by people who have been marginalized and discriminated against by others who claim to profess daily the Oneness in plurality, by people who have passionately attempted to push these people OUT of Judaism. And how have they responded I asked myself? By living authentic lives, in truth, and on a beautiful sunny Thur afternoon in Jerusalem in the middle of this march, distribute to the crowds of people a means to honor God, His world and His Sabbath by infusing more light into creation.

And now I am immersed in darkness. Darkness infused into the world of diversity and plurality by an individual who claims to honor the Divine Presence in the universe, and perhaps even himself.

Such a paradox! Such a stark paradox I found myself dwelling in.

Not much more than 24 hours later the entire eternal holy city of Jerusalem becomes enveloped in the quietude and peace of God’s magnificent gift — the Holy Sabbath. As if the past 24 hours never occurred I entered into reflection, prayer, community and unity — all within a pluralistic space. A miracle! A modern day miracle.

And then as the stars came out Saturday evening and the Sabbath draws to a close, I prepare myself to attend and join the #LOVEALWAYSWINS rally in downtown Jerusalem. I found myself immersed in the diverse expressions of humanity, all supporting each other with the intuitive awareness that only LOVE and always ONLY LOVE always wins. True to the teachings from our Rabbis centuries ago, “A little bit of light banishes much darkness.” I saw people holding signs quoting the verse in Leviticus 19:18, “You shall love your neighbor as yourself.” I was privileged to hear Rabbi Benny Lau speaking out on homophobia and racism towards Arabs, quoting verses from the Bible. “For from Zion shall Torah come forth, and the word of God from Jerusalem.” (Isaiah 2:3)

I felt inspired, I felt encouraged, I felt immensely blessed to be Jewish, to be Israeli, to live in Jerusalem and to be part of humankind. I walked home more determined than ever to develop a sense of being in the presence of the Divine as much as possible. That intentional spiritual living means that I recognize that I am created in the Image of the Divine Creator, as every other human being is as well — no less and no more. That the only way to truly rid this world of darkness, hatred, and bigotry is by infusing more and more light into the world – in how we think, speak and behave and by recognizing the Divine Presence in every moment, or at least in more moments today than yesterday.

And then again I dwell in the paradox. I find out that one of the six victims, 16-year old Shira Banki succumbed to her wounds and passed into the next world as a result of having been stabbed in her back by the “agent of darkness.” I then go outside and smelled the smoke arising from the blazing fires in Jerusalem where the authorities suspect arson. I read in the news, “Officials looking closely at Jerusalem blaze; arson suspected.” And this darkness in the backdrop of an arson related terrorist attack Thur night on “others” who are perceived to be different, resulting in the death of a baby.

So much paradox and all that remains clear to me is that those who believe that a little bit of light banishes much darkness, must keep infusing the world with more light and encourage others to do the same. I ask myself, “Is there any other way that I can be more authentic and more honest in fulfilling the purpose for which I believe I have been created?”

About the Author
Yiscah Smith is the author of Forty Years in the Wilderness: My Journey to Authentic Living. A documentary on her life, I Was Not Born a Mistake, will be out fall in Israel and North America. She lives in Jerusalem and teaches at the Pardes Institute of Jewish Studies and in her home in Jerusalem.
Comments