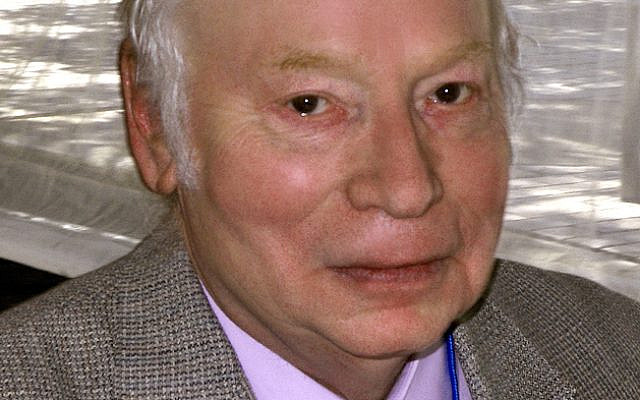 The world has lost one of the greatest theoretical physicists of our time—Steven Weinberg (1933–2021). I never met him in person. But I studied his textbooks at university. His Gravitation and Cosmology, translated into Russian, was one of the few books I brought with me when we left the Soviet Union in 1982. This book is still on my shelf.

Weinberg’s contribution to physics was enormous. His electroweak theory earned him a 1979 Nobel Prize in physics (which he shared with Abdus Salam and Sheldon Glashow). His work played an essential role in laying the foundation for the Standard Model of particle physics. He made significant contributions to the theory of strong nuclear forces, formulating the quark theory of strong interactions called “technicolor.” His idea of effective field theory changed our understanding of the renormalization of quantum fields (for a simple explanation, see my earlier post, “Tzimtzum III—Renormalization—Sweeping Infinites under the Rug”). He made important contributions to cosmology, correctly predicting the value of the cosmological constant. The list of Weinberg’s contributions to physics is very long indeed.

Much has been written about Weinberg in the month since his passing on July 23 at the age of 88. However, I would like to focus here on one aspect of his life that hasn’t been covered, indeed the great paradox of his life—the unresolved conflict between his beliefs and his physics. No one will be surprised by my characterization of Steven Weinberg as one of the greatest physicists of our time—almost every article about him after his death used such language. In 2004, in awarding Steven Weinberg the Benjamin Franklin medal, the American Philosophical Society cited him as “considered by many to be the preeminent theoretical physicist alive in the world today.” But if I were to characterize Weinberg as one of the greatest mystics of our time, that would undoubtedly raise many eyebrows. Steven Weinberg was a rationalist and an atheist. Born to Jewish parents, he had no lost love for Judaism—or any religion, for that matter. In fact, he was a rather outspoken atheist.

An atheist who is a mystic appears to be an oxymoron, but Weinberg was a paradoxical figure himself. When he spoke or wrote (and he wrote many popular books), he spoke against religion and God. But when he did physics, he did God’s work. Weinberg’s immense contribution to physics bespoke a mystical sense of unity and purpose.

Jewish mystics, such as kabbalists and Chasidic masters, seek unification through meditations on Divine names and the performance of mitzvot—Torah commandments. They speak of a higher unity (yichuda ila’a), as it exists in the mind of God, and of lower unity (yichuda tata’a), as it manifests itself in Creation. Many Jews have a custom (enshrined in many prayer books used by Sephardic and Chasidic Jews) to declare before performing a mitzvah (a Torah commandment) that it is done for the sake of unification . . . Despite his words, this is exactly what Weinberg did.

His greatest accomplishment was unifying two fundamental forces of nature—the electromagnetic force and the weak nuclear force. The history of theoretical physics is, to a large degree, the history of unification. Isaac Newton unified the force that caused apples (and other objects) to fall to the ground with the force that made planets move in the solar system by recognizing that they were the same gravitational force. These distinct phenomena were described by Newton in his Universal Law of Gravity, an incredible feat of unification. The second step was made primarily by James Clerk Maxwell,[1] who, in his 1873 publication A Treatise on Electricity and Magnetism, unified the electric force with the magnetic force into a single electromagnetic force. His equations of electromagnetism, beautiful in their symmetry and simplicity, inspired Albert Einstein, who in 1915 found unity in gravity and inertial forces.[2] In 1963, Steven Weinberg published a three-page paper, in which he unified the electromagnetic force with the weak nuclear force into a single force described by his electroweak theory. This was a giant step toward laying the foundation for the Standard Model of particle physics . . . as well as toward the unification called in Kabbalah yichuda tata’a (the lower unity)—the unity that is manifested in Creation.

It is believed by Jewish mystics that the ultimate unification will be achieved with the messianic redemption. Every act of unification (through meditation or performance of mitzvot and good deeds) serves to hasten the arrival of messianic times. Few people did more in this regard than the self-proclaimed atheist Steven Weinberg. This is the great paradox of his life.

While unification is a doctrine of Jewish mysticism, the purposefulness of Creation is a mainstream concept fundamental to Judaism and all monotheistic religions. A belief in a purposeful Being who created this universe necessarily implies the purposefulness of life as giving meaning to all of Creation. However, Weinberg would have none of that! In the conclusion of his most popular book, The First Three Minutes: A Modern View of the Origin of the Universe (1977), Weinberg wrote, “the more the universe seems comprehensible, the more it seems pointless.”

Yet, when it came to calculating the value of the cosmological constant (which determines the rate of expansion of the universe), Weinberg used the anthropic principle, which states that the universe was fine-tuned to allow intelligent life to emerge—a manifesto of a purposeful Creation.[3]

Weinberg was not alone in living out this cognitive dissonance. Physicists are deeply religious people—and atheists are no exception.[4]

Steven Weinberg was a living paradox—a man who spoke of atheism but whose physics bespoke religious and mystical ideas of purposefulness and unification. The world lost a great physicist and a great mystic.

[1] As well as by Michael Faraday.

[2] Once, while riding down in an elevator and feeling weightless, Einstein realized that the force of gravity pulling him down was canceled by the inertial force pulling him up. He thus understood that it must be the same force. Since inertial forces are fictitious forces arising only in non-inertial frames of reference, Einstein concluded that gravity is not a force, but merely a result of the curvature of spacetime. He later wrote about his epiphany in the elevator as the happiest thought of his life.

[3] In the interest of full disclosure, philosophers disagree on the meaning of the anthropic principle. Also, there are different formulations of this principle—strong formulations that clearly have teleological undertones and weak formulations that philosophers and physicists tend to chock up to a random outcome in the context of a multiverse—a highly speculative and non-Popperian idea.

[4] Paraphrasing Sigal Samuel’s observation that “Americans are deeply religious people—and atheists are no exception” in “Atheists Are Sometimes More Religious Than Christians,” The Atlantic, May 31, 2018, www.theatlantic.com/international/archive/2018/05/american-atheists-religious-european-christians/560936/.