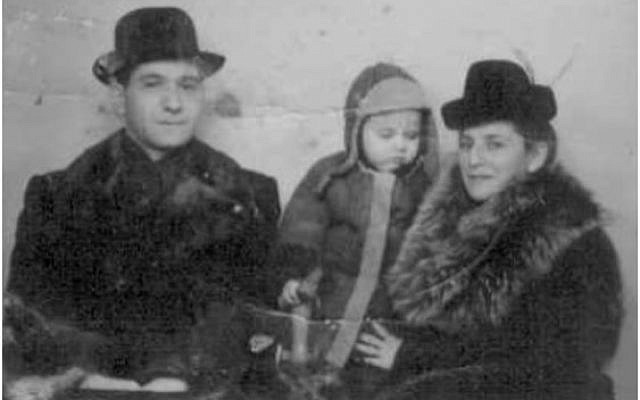 The Pelta’s left Lodz and arrived in Stockholm after the Kielcie pogrom of July, 4 1946. Their building in Stockholm was fairly new with an elevator. However, they suffered in Sweden a lot as well. They learned that the landlord of the building had organized Nazi meetings in their building. This really terrified them. So they made the decision to move to the country-side during the winter while it was snowing outside.

They moved to Taby (North of Stockholm) Sweden. They lived in an apartment that was just as dilapidated and disgusting as the apartment they had during the war. Grandpa Leon got at the job August 5, 1947 at the “Enko” store as a Master Tailor. He also was the personal tailor for “The Royal Family” of Sweden.

While living in Sweden Lejbus changed his name to Leon Pelta. They lived on the street Bromma Plan. Their second daughter, Esther Sarah was born in the Kowinski Hospital (Queen’s Hospital) in Stockholm September 15, 1947.

Itzek Jurciewicz after the war was freed from the coal mines of England and was allowed to travel to Stockholm Sweden. There, he met his wife Shula Gorevitch from Vilna. She was a survivor of either the Dachau or Bergen-Belsen concentration camps. They also eventually moved to San Francisco, California. They had one daughter Beverly who married (her husband died in 1986 Los Angeles probably from AIDS).

Shula was saved by a Swedish royal by the name of Folke Bernadotte, Count of Wisborg. He was a member of the Swedish royal family (January 2nd 1895 to September 17th 1948) a Swedish nobleman and a diplomat. During World War II he negotiated the release of about 31,000 prisoners from German concentration camps, Ironically , he was assassinated in Yerushalayim in 1948 by the paramilitary Zionist group Lehi while pursuing his official duties. Upon his death, Ralph Bunche took up his work at the UN, successfully mediating the 1949 Armistice Agreements between Israel and Egypt. Bernadaotte brought Shula and thousands of other refugees out of Germany and sent them to Stockholm Sweden.

Szyfra finally made contact with her of Uncle Abe (brother of Esther Sara Jurkievitch) who resided in San Francisco. When my grandparents were located in Siberia (1940), they were sent affidavits valued at $200 ($3,000). This was confiscated by NKVD and they demanded and exorbitant amount of money for the documents, which they not possess. These documents were destroyed by NKVD (KGB).

Szyfra now requested new affidavits for travel to the USA which cost $50,000 ($750,00!, in its current value). This bond was paid by Uncle Abe Hirschberg to sponsor the Pelta family’s move to the USA. He used funds from winning horse races. He had a hobby of raising race-horses. Uncle Abe had horses called “Bolero”, “Dinner Gong”, and “Horse Occupy”. Grandma received a picture of the winning horse Bolero, when they were living in Sweden. The horse had a total of 16 wins, and made Uncle Abe a profit of US $156,450 (worth $1.7 million in 2021!)

Bolero winning horse. The winnings financed the Pelta move to the USA.

Uncle Abraham also sponsored other family members. My grandparents never received these initial affidavits papers allowing their travel to the USA. Since, these documents arrived too late for them , in Samarkand (USSR). At this point they had already left Russia, and were well on their way to Poland. Uncle Abe had to re-sponsor the Pelta’s again in 1945-46. The USA State Department was scared of Communist infiltration; this was their (antisemitic) excuse to limit Jewish immigration.

Abraham Hirschberg’s horses won several races, with the money he sponsored the Pelta family to come over to the USA. Bolero was bred by P. A. B. Widener II’s Elmendorf Farm and then purchased by Abe Hirschberg. He was trained by Frank E. Childs. He stood at The Stallion Station near Lexington, Kentucky, where he died in 1975.

Another horse was called Dinner Gong. He was purchased by Abe Hirschberg on September 30, 1948 for $34,000. In 1949, Dinner Gong won the San Antonio Handicap horserace. He won $169,000! In August of 1949 Dinner Gong broke his leg it was decided to euthanize the horse and its carcass was sent to the glue factory.


He had a total of 21 wins, made a profit of US $217,214 (worth $ 2.5 million in 2021!) Occupy was bred and owned by John Marsch III. He was trained by Burley Parke and then transferred to the barn of F. E. Childs during his 5-year-old season. Marsch sold him to Abe Hirschberg during the winter of 1946-1947, and Hirschberg in turn sold the horse to a syndicate headed by Alfred Vanderbilt and Adolphe Pons in March 1947.

On January 4, 1951 the Pelta’s received their visas from the British Embassy in Stockholm. Uncle Abe Hirschberg had contact with the American Consul of Sweden, Carl Birkeland. They took a train from Stockholm and stayed in a hotel overnight. The next day they loaded the SS Llyod to London. They left Sweden January 9, 1951 from the port city of Gotenborg.

They arrived in London England January 11, 1951. Two days later, the Pelta family boarded the Queen Mary ship in South Hampton England and left to the USA on January 13, 1951.

The RMS Queen Mary is was a retired British ocean liner that sailed primarily on the North Atlantic Ocean from 1936 to 1967 for the Cunard-White Star Line and was built by John Brown & Company in Clydebank, Scotland. Queen Mary, along with RMS Queen Elizabeth, were built as part of Cunard’s planned two-ship weekly express service between Southampton and New York. The two ships were a British response to the express super-liners built by German, Italian, and French companies in the late 1920s and early 1930s.

With the outbreak of the Second World War, she was converted into a troopship and ferried Allied soldiers during the conflict. Following the war, Queen Mary was refitted for passenger service and along with Queen Elizabeth commenced the two-ship transatlantic passenger service for which the two ships were initially built. The two ships dominated the transatlantic passenger transportation market until the dawn of the jet age in the late 1950s. By the mid-1960s, Queen Mary was aging and was operating at a loss.

After several years of decreased profits for Cunard Line, Queen Mary was officially retired from service in 1967. She left Southampton for the last time on 31 October 1967 and sailed to the port of Long Beach, California, United States, where she remains permanently moored. The ship serves as a tourist attraction featuring restaurants, a museum, and a hotel. In 2021, faced with a series of bankruptcies of leaseholders and failed developments, the City of Long Beach took control of the ship and vowed to effectuate needed repairs. As a child we toured the Queen Mary shop with my father several times. He would tell us the story where the wind on the deck to the Queen Mary was so strong the he was lifted in the air and almost went overboard. However, Grandpa Leon was able to literally catch him by his ankles, and avert a disaster.

About the Author
Arie E. Pelta, M.D., a Board Certified General and Colorectal Surgeon from the USA , made aliyah with his wife and 7 children in 2013. Received Rabbinical ordination in 1997. He is also a active Medical Corps Officer holding the rank of Captain in the IDF Reserves. Currently practicing in Laniado Hospital in Netanya; speciaizing in the surgical care of all problems of the colon, rectum and anus.
Related Topics
Related Posts
Arie E. Pelta