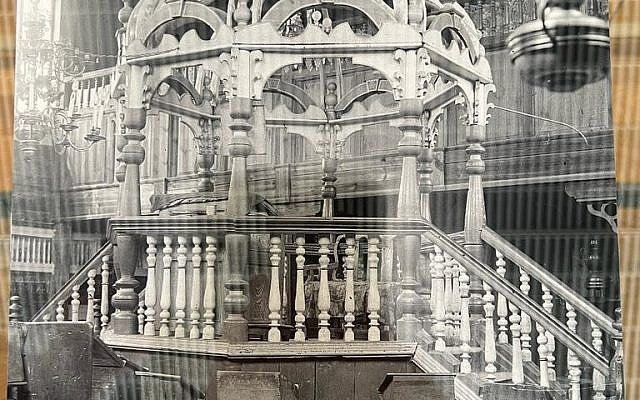 The Konskie Synagogue, built in 1780. Burned to the ground by the Germans in September 1939. (courtesy)

And G-d sent me before you to make for you a remnant in the land , and to preserve [it] for you for a great deliverance (Bereishis 45:7)

The first mention to the Jewish community in Końskie dates back to the 16th century. The town of Chmielnik, close to Konskie has documented that the Jews who initially settled in that town originated from Spain.  In 1984, my Grandpa Leon told our teacher, Rabbi Harry Greenspan, that the Pelta family came from Cordoba, Spain.  However, Cordoba is both a province and a city.  We do not know which they came from.  We were also told by an aunt, that four Pelta brothers fled Spain after the expulsion of the Jews from Spain leaving their children and wives behind, never to see them again.  These legends do exist in similar histories of Jews from Iberia.  However, other than similar legends from other distant Pelta relatives, we lack documentary proof of these claims.

The pre-World War II Jewish population of Końskie (known as Koinsk during the Russian occupation or Kinsk in Yiddish – קינצק / קינסק among the Jews) comprised 60% of the total population of the town or about 6,500 persons in September 1939.

Several Jewish schools were started in Konskie including a Talmud Torah. In 1920, Agudas Yisrael (a political party in the Polish Sejm legislature) established a Yesodei Torah Cheder and a Beis Yakov school for girls. Beginning in the 1920s, under the sponsorship of the Zionists, a Tarbut School and Hebrew speaking kindergarten were also established. However, most of the Jewish children attended the government run school that had seven grade levels (the Shabasovka). A Yeshivah was set up in 1928 under the leadership  Rabbi Meyer Weingarten (son of the Chelkas Yoav), with one hundred students from Kinsk and the surrounding cities.

Russian rule adversely affected the lives of the Jews through blatant anti-Semitism. In Poland, the Imperial Russian Government was referred to as “Congress Poland”.  In 1919, the Polish Jews  suffered from violent attacks by the soldiers of the nascent Polish Army fighting for Polish independence under General Haller. Under the guise of searching for weapons, Jewish houses in Kinsk were burglarized by the Polish soldiers of Haller, including the Beis Midrash. During these searches, merchandize and items of value were confiscated and some Jews were beaten by the local Poles and the soldiers.

In Konskie, during the 1930s the boycott activities against the Jews continued by Polish anti-Semites led by the “National Democrats” (“Endeks” in Polish); a Fascist political party.   Guards were posted to prevent people from entering Jewish owned stores. There were also attempts to arouse more vehement demonstrations.

In July 1937 during the time of the country fair, in the nearby villages Niedziela and Lopuszno, members of the Endek’s boxing club attacked Jewish peddlers and merchants. They overturned their carts and beat-up the Jews expelling them from the town. In this instance, too, the Polish police stopped the rioting. However, the criminals were rarely prosecuted.  In those rare circumstances when they were prosecuted for murder, they emerged “Not Guilty” at trial despite compelling evidence. This is documented in Menachem Begin’s autobiography “White Nights”.  In September of the same year, the glass windows in several Jewish homes were smashed, among them was the residence of the Admor of Radoszyce of Kinsk.

The Polish “Blue” Police, or the Polnische Polizei des Generalgouvernements  were revived  by the German forces in 1939, in occupied Poland.  The German police forces members of the Order Police (ORPO), deployed in occupied Poland in the fall of 1939 numbered about 5,000. These police were simply unable to maintain public order or enforce the new regulations.  During the first months of occupation the ranks of the Polish Police (PP) grew quickly, reaching 10,000 officers and men in the beginning of 1940, and, at its peak in late 1943, more than 20,000. The Polish resistance, or the so-called Polish underground state, gave the Polish policemen its blessing.  The “Blue” Police, as the PP came to be known for their dark-blue uniforms, thus were the only militarized and armed Polish formation the Germans allowed to continue operating in occupied Poland (https://www.ushmm.org/m/pdfs/20170502-Grabowski_OP.pdf).

In the small ghettos, the German presence was much less conspicuous (often the Germans were altogether absent) and the role of the Blue Police grew accordingly. The Blue Policemen enforced the requirement that Jews wear identifying armbands. Shooting Jews became, in 1941, one of the many additional responsibilities of the Polish Blue Police. In the period immediately preceding the liquidation of the ghettos or the beginning of the implementation of the Final Solution, the policemen in blue carried out executions of Jews.  One can say that the policemen proved to be very diligent pupils who, in many cases, surpassed their German teachers even before the end of 1942.

In the ghetto in Biłgoraj, fifty miles south of Lublin, Wiesiołowski, the commander of the Polish police, surrounded by scores of kids aged 6 to 12, searched the attics, cellars, and sheds. For each Jewish child brought to him he gave the Polish kids sweets. He grabbed the small Jewish children by the neck and shot them through the head with his small-caliber revolver.

The Polish police collaborated with the Germans and pursued their own agenda of exterminating the Jews. The Polish policemen were responsible for the deaths of at least hundreds of thousands of Polish Jews. Today, in Poland, attempts are being made to portray the Blue Police as true Polish patriots deeply engaged in the resistance—as unsung heroes of the struggle against the Germans! The percentage of Polish Jews who survived the Holocaust stands at about one percent. This does not mean that all of them survived the subsequent pogroms and murders of the postwar period.

After the Nazi German invasion of Poland, a Ghetto was established in 1940 and closed off in the spring of 1941. However, Poles entered and exited the Ghetto with no restrictions and used that opportunity to engage in a significant amount of business with Jews who were not allowed out of the ghettos onto the “Aryan Side”. The Germans had already murdered massive numbers of Jews by the time the Jews of Konskie were deported to Treblinka. The “Aktion” (the complete eradication of the Jewish population of Końskie), took place on November 3–9, 1942. All men, women, and children were loaded onto cattle cars by train to Treblinka, Blizyn, Skarzysko, Kamienna, and gassed to death upon arrival.

According to Rabbi Isaac Suna, 88 people including him, defied the order to present themselves for deportation and languished in the attic of my grandfather’s home at 42 Ul. Pilsudskiego.  They gave themselves up on January 13, 1943 to the SS.

These murders could only have occurred with the active participation of the Polish Blue Police.  Approximately 600 Jews were murdered by the Nazis on the way to the camp. In the subsequent January 1943 “Aktion” in the Konskie Ghetto, the remaining Jews were ferreted out from attics and other hiding places and murdered.

During the first days of the war, most of the Jewish residents fled in fear of the shelling and found shelter in the surrounding area, especially in the nearby town of Przysucha.  Grandpa Leon, went into the basement with his younger brother David and his sisters Manya and Leah.  However, the Germans were already there and so they returned to Konskie. A portion of the local Jewish population abandoned the town with the entry of the Germans.

In one incident, described by Grandpa Leon, the Germans forced the Jews in September of 1939 to get on their hands and knees and wash the streets. At the same time they were beaten by German soldiers and the Polish police.   Many Jewish men were held prisoner at the railroad workshop and thirteen of them were murdered. The Germans seized a few dozen Jews from the street, apparently, this happened on September 12, 1939, as allegedly in the area of Konskie a German had been killed. They were ordered to dig a grave for the German and afterwards to run. The Germans fired machine guns at those running and part of them were killed. Estimates on the number of killed vary among the witnesses from a few to forty. The synagogue was also set on fire by the Germans at this time. The labor leader Dr. Cahana, Rabbi Weingarten and other people were held as hostages and only released when the Jews of Konskie paid a large punitive fine.

World War II Końskie was briefly visited by Adolf Hitler on September 10, 1939 while on the way to Kielce after landing on an airfield nearby. His car cavalcade visited the headquarters of General Walther von Reichenau at the local mansion. Hitler was followed by director Leni Riefenstahl who came a day later, ordered to film the Nazi German victory over Poland. Reportedly, she fainted when witnessing the random killing of two dozen Jews summoned to dig graves on September 12, 1939 (as described above).

Końskie was the centre of the Polish underground resistance during World War II, with battles fought by the Armia Krajowa under Major Henryk Dobrzański (“Hubal”) in the nearby forests which the German army feared to enter. The town was taken over by the partisans for a few hours on the night of September 1, 1943, and they succdesfully assassinated a number of Gestapo agents. The Nazis retaliated by executing civilians including Jews.

Of the Jews living in Konskie at the beginning of the war, some 200 spent the time hidden by Poles or escaped with the help of Aryan documents (mostly women and children). Another small group, up to 15 in number, survived the Nazi camps and around 70 returned from the Soviet Union. Some men arrived in Eretz Yisrael with General Anders’ army. After the war, a few Jewish families lived for a short time in Konskie.

Rav Yoav Yehoshua Weingarten (1845-1923), was a prominent rabbi and author of Torah commentaries. He became the rabbi of Konskie in 1894, remaining there until his death in 1923. Rav Weingarten began his studies with Rabbi Zev Nachum Borenstein in Biała, commonly referred to as the Agudas Eizov. He also studied under the tutelage of Rabbi Zev’s son, Rabbi Avrohom Bornsztain (The Sochachover Rebbe); commonly known as The Avnei Nezer. Rav Weingarten became one of his premier disciple

The Końskie Jewish cemetery was established in the 17th century, on the corner of today’s Staszica Street and Wjazdowa Street. As with the other Jewish cemeteries, the Końskie cemetery was destroyed during World War II, and on its territory Nazis carried out the executions of Jews and Poles.  As ordered by the German town manager, Jews were forced to break the tombstones. The stones were then used in construction works. For instance they were used in the construction of the pig fattening farm and the tower in Modliszewice. In the 1990’s some of the broken matzevos were sold, to one of the inhabitants of the village of Kazanów. Today, buildings with fragments of maztevos in the walls still can still be found in Końskie and in nearby towns and villages. The cemetery was officially closed by the authorities in 1965, and its territory was stolen by the Poles to build private Polish homes over the Jewish graves.