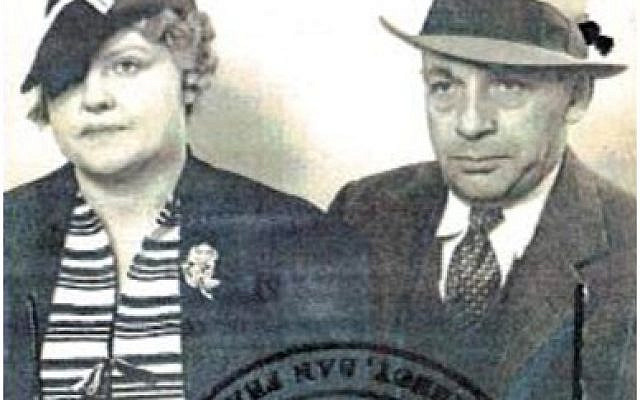 My great grandmother, Esther Sarah Jurkiewicz (nee Hirschberg), had three sisters and one brother. Her brother’s name was Avraham Hirshberg. One of her sisters lived in Belgium.

Grandma had a boyfriend in 1938 (not my grandfather). He wanted to get married to her and move to Antwerp Belgium. She learned how to make bras and girdles, in case she needed to find employment in Belgium. Her mother, Esther Sarah did not approve of this marriage idea. Since grandma she did not want to get married without her mother’s  “blessing”; this marriage never came to fruition. She did not marry at this time and this “boyfriend” moved from Tomaszow to Belgium. Later on, Manja Pelta who was visiting from Konskie, introduced her brother Lejubus Pelta to Szyfra Jurkiewicz. This is how my grandparents met each other.

Esther Sarah Jurkiewicz owned a hardware business consisting of building materials; it was a family-run business. They supplied all the essentials required to build a building: from the foundation to the roof. The Jurkiewicz family had business deals with Germans, Jews and Poles. Grandma pointed out that they had lots of satisfied German customers.

They did not live in a private home; rather they chose to rent a large apartment. They never owned their own home. The plan was to build an apartment for every child in their rental building. In addition, they owned multiple warehouses throughout the city in order to store the products for their family store.

When her father Berisz Yona died in 1930 (grandma Szyfra was 14 years old), her mother Esther Sarah continued to raise the family and run the business as a widow.  As early as 1933, they started to feel something bad was going to occur with the rise of Hitler to Power in Germany. However, they did nothing about this concern. No one imagined the hell of the Holocaust to come.

In 1939, anti-Semitism started to be more blatant. In daylight Jews were harassed in public parks. They would be chased and beaten for mundane activities such as walking in public parks. The Jews started to feel uncomfortable, but nothing seriously was done in response to these events. Everyone felt this stage would soon pass; it did not (historically anti-Semitism never passes, it just gets worse) .

Many years before all this turmoil began; Grandma Szyfra had an Uncle named Abraham Hirschberg. He was a brother of Esther Sarah. He left Poland at the age of 14 for the USA to pursue his dreams and fortune. G-d has always prepared the cure for his people prior to infliction of the disease הקדים רפואה למכה.

Grandma Szyfra had an uncle (the brother of Esther Sara) in the USA named Abraham Hirschberg who lived in San Francisco.  He left Poland at the age of 14 as an illegal immigrant. He was as “stowaway” on a ship from Germany to the USA. He arrived in NY with $1 in his pocket.

He initially settled in Manhattan where he married a first cousin.  They moved to San Francisco in 1905.  For some reason, the local press was intrigued that a man would marry a first cousin and wrote an article about it.  Later on they divorced or had the marriage annulled shortly thereafter. There was a question whether she was simultaneously married to a Brazilian diplomat!  Abraham allegedly married multiple times after that; however, no records have been found proving he was subsequently married, although he did proclaim that he was.

As time passed, he became a powerful political figure known as Abraham “Murphy” or “Murph” Hirschberg with the nickname “the 12th Supervisor”.  The San Francisco Board of Supervisors had 11 supervisors who governed the City & County; and he was known as the unofficial “12th“ supervisor.  Abe Hirschberg progressed on to fame and fortune and financial ruin – multiple times.

In San Francisco there was a political boss named Thomas Finn, dubbed “Boss Finn”. He was a former state senator and was the sheriff in San Francisco from 1910-1927. He was very influential and led the Progressive wing of the Republican Party.   Finn was associated with Abraham “Murphy” Hirschberg.  In the 1920s Abraham was also known as a prominent San Francisco real estate investor.

About the Author
Arie E. Pelta, M.D., a Board Certified General and Colorectal Surgeon from the USA , made aliyah with his wife and 7 children in 2013. Received Rabbinical ordination in 1997. He is also a active Medical Corps Officer holding the rank of Captain in the IDF Reserves. Currently practicing in Laniado Hospital in Netanya; speciaizing in the surgical care of all problems of the colon, rectum and anus.