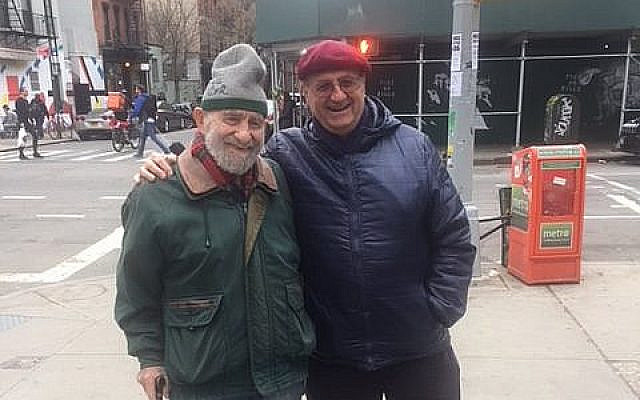 When the good weather allows it, I get together with my friend Manny Greer and sit on the bench in front of our favorite coffee-house in Soho, Ground Support, whose owner, Steven, is a good friend of ours. Although he is much younger than we are (he is in his forties, Manny is 95-years-old and I’m 80) we have a good banter among us.

As Passover was coming soon, I started discussing the merits of the different brands of matzo with Manny. Although I only learned about matzos when I came to live in New York from Argentina, Manny, coming from a Jewish background, had eaten matzos all his life and was quite addicted. Streit’s, an American brand, originally produced in Manhattan but now headquartered in Orangeburg, New York, was the one we liked most. That was until we discovered Holiday, produced in Jerusalem, that we thought was even better.

One day, as we were watching life pass by, I suddenly asked Manny, “Hey, Manny, have you ever eaten a toasted matzo?” With a look of horror and disbelief he said, “If I had eaten what?” “Toasted matzo,” I replied. “Since I started eating matzos, I always toast them and I find that, properly done, they become much tastier and the butter is easier to spread on them.”

While sitting at the coffee-house Manny likes to teach me some Yiddish words and he finds some pleasure in correcting me when I mispronounce them. “You are an absolute meshugener,” he told me, “You never, never, toast matzos.” “Why?’, I said, “I toast my bread. I don’t see why I couldn’t toast my matzo.” “Because you don’t,” he replied, “that’s why. You Argentinians are crazy. That’s the most stupid idea I ever heard…”

His reaction didn’t seem reasonable so I made a point, just to tease him, of asking every few days if he had eaten a toasted matzo. His reply always was negative. Until one day he told me, “Tonight I am going to toast my matzo, so you will stop bothering me. How should I do it?” “Very simply,” I said. “Just put it into the toaster for the shortest time, since they burn very easily, and voilá, you will have your toasted matzo.”

That evening, I was watching a British mystery on TV when the phone rang. “Don’t answer it,” I told my wife. We were about to find out who the murderer was. My wife, who is a compulsive phone answerer, passed me the phone and said, “It’s Manny for you.” As soon as I got on the phone Manny asked me, “Can you hear it?” Of course I could. With his laughter in the background I could hear the unmistakable sound of his crunching a toasted matzo.

About the Author
César Chelala is a physician and writer born in Argentina and living in the U.S. He wrote for leading newspapers all over the world and for the main medical journals, among them The New York Times, The Washington Post, The Wall Street Journal, The Japan Times, The China Daily, The Moscow Times, The International Herald Tribune, Le Monde Diplomatique, Harvard International Review, The Journal of the American Medical Association, The Lancet, Annals of Internal Medicine, and The British Medical Journal. He is a co-winner of an Overseas Press Club of America award and two national journalism awards from Argentina.
Comments