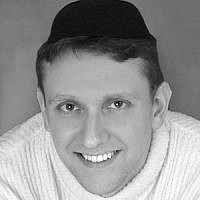 The Blogs
Yisroel Juskowitz
Apply for a Blog
Advertisement
Please note that the posts on The Blogs are contributed by third parties. The opinions, facts and any media content in them are presented solely by the authors, and neither The Times of Israel nor its partners assume any responsibility for them. Please contact us in case of abuse. In case of abuse,
Report this post.

Recently before starting on a long trip home, I glanced at the news headlines on my phone. Alex Jones had been ordered to pay close to one billion dollars to the families of the victims of the Sandy Hook Massacre. For those who are unfamiliar with Alex Jones, Mr. Jones is a dark side conspiracy theorist and propagandist who spins twisted fabrications for personal financial gain and fame. He has also given platforms to Alt Right and White Nationalists and spreads a lot of their hateful ideologies to over 75 million twitter followers. One of his most preposterous claims of all was that the entire Sandy Hook Massacre was an elaborate hoax with staged actors to advance some government agendas. This awful lie had led to many of the victims of Sandy Hook to be harassed and threatened for years by Alex Jones’s followers. This had led to a lawsuit filed by the families of the victims of Sandy Hook.

I had followed the case with some interest and felt a sense of relief for the victims who had been tormented for years because of this man’s awful lies. But soon, I did what I always do on long trips, which is to turn on a lecture from one of my favorite Rabbi’s on my phone. Soon I was happily ensconced in a Torah lecture, filled with inspiration and meaningful ideas and gentle warm guidance on how to lead a more fulfilling life.

About halfway through my journey, I was struck by a powerful idea. Within just a few minutes, I had seen firsthand the two extremes of the power of speech. I first was seeing the depths of depravity of what speech can do, such as that used by Alex Jones and the immeasurable harm it can do countless numbers of lives. Then just a few moments later I was able to see the extraordinary heights of what speech can do, as this rabbi was doing, in his many Torah lectures online. He was able to heal people, to inspire, to share Divine Wisdom, and most importantly to help people become better people with the Torah as a guide.

This coming week we will once again be starting the Torah anew, with the first Torah reading; Bereshit (Genesis.) In it, of course, we encounter the first Man endowed with a soul as the Torah writes “ And God breathed into Adam a spirit of life.” The Hebrew word for “breath” used in the verse is Nishima, which of course is very closely related to the word Neshama, or Soul. Here we see that Adam was given the Breath of the Divine Himself, which of course is the Human Soul, the spark of Godliness within all of us. However, many of the classic Jewish commentators expound that this actually refers to the ability of Man to be able to speak. Indeed, this is what sets us apart from the Animal Kingdom. In many ways, Man’s ability to speak is one of the greatest manifestations of the Divine Within.

But herein of course, lies the greatest caution. The ability to speak is more than just a right, it is a Divinely ordained gift, and a gift is to be used properly. To quote Uncle Ben’s famous line to the young Peter Parker in the Spiderman movie: “With great Power, comes great Responsibility.” Perhaps no greater feature in Man has such extraordinary power in such extremes; the dual capacity to both heal and destroy as the power of speech. Speech has had the power to bring shame, humiliation, anger, disgust, and even sometimes violence and murder. And yet this very same power can bring people back to their faith, to uplift, to build organization, to build bridges, and even to save lives.

Within the Torah itself, we see stories of people who used speech in both extremes. Abraham, the first Jew, used speech to speak of the eternal truths of Monotheism to a Pagan world, and indeed bring many people closer to the Truth. Moses, though not a natural gifted orator, was able to rally his People to believe in the one God and bring them toward freedom. On the other extreme, we see Pharoah convincing his people of the supposed evil of the Jews, leading to hundreds of years of enslavement. And many years later we see the wicked Haman convincing the mighty Persian King to try to destroy the Jewish People.

So how do we use this great power? Thankfully our Torah has guided us with ways to use speech in a positive way. But ultimately the decision lies within us. God has bestwed within each of us the power of free will. Every word we utter has power. Every word carries weight. Let us utilize this great gift for an even greater good, and help make this world into a better place.

About the Author
Yisroel Juskowitz is most well known for his two best-selling books on Jewish topics "The Hidden Path" and "For Every Season, both of which has received widespread critical acclaim. He is involved in many creative projects to inspire, educate, and entertain the Jewish people. He has two albums of his music, which was received very warmly, he has performed to Jews of all walks of life and ages, and has also given many classes on many Jewish topics. He draws and paints Judaica art as well. Yisroel's passion is to use his many creative outlets to further help the Jewish people and Jewish causes.
Related Topics
Related Posts