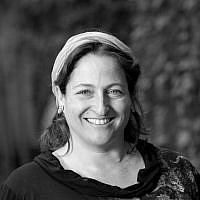 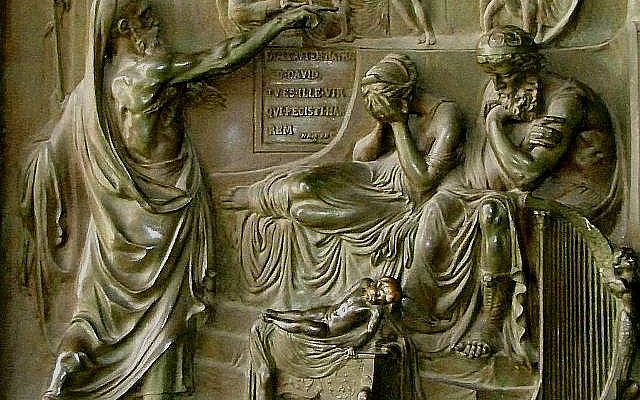 Nathan confronts King David for his adultery with Bathsheba, an affair that produced a mamzer (who soon dies). Bronze bas-relief on the door of La Madeleine, Paris. (Wikipedia, AP: Baron Henri de Triqueti)

When we use a library, open a photo album, or visit our doctor, digitization has great advantages. The information we need is accessible, organized, and comprehensive; a search engine saves us hours of wandering through dusty archives. But that is not the case in matters of personal status, and especially mamzerut (halakhic illegitimacy). Here, a shorter memory is better, with the information being less accessible. “We were given two powers, remembering and forgetting, and we cannot do without both of them,” wrote Berl Katznelson about Jewish history in 1934. But this is an issue where what is needed is the power to forget. Let’s bring back the partially illegible card catalogues in wooden drawers, faded photos, and the crumbling inscriptions on gravestones ravaged by time.

The ancient world was based on social classes and hierarchical order much more than is the modern world. Individuals’ birth dictated not only their economic status, but also their legitimacy in the world. Any stain on the family’s reputation accompanied some people wherever they went; those who could not be admitted to the community faced a harsh and bitter destiny. This was the fate of the mamzer, a child born of a forbidden union (through incest, or to a woman by a man other than her husband). The Torah stipulates that a mamzer may not enter the community “until the tenth generation,” an expression interpreted by the Mishnah as meaning an eternal status for his or her descendants.

On the other hand, in the predigital world, memory was limited in time and space. Those who moved to a new place were not necessarily burdened by their previous identity and could reinvent themselves. In addition, over time, the passage of generations consigned some blemishes to oblivion, and a great-grandparent’s problems did not necessarily taint the fourth generation. With regard to mamzerut, Jewish communities followed the principle enunciated in the Talmud by R. Isaac (Kiddushin 71a): “Once a family has blended in, it remains so.” In other words, if a person’s problematic status has been forgotten, halakhah, too, “forgets” it. Down through the centuries, issues of mamzerut were resolved this way — if not in the first generation, then later on.

That is no longer the situation today. We pride ourselves on a more tolerant and egalitarian world, in which people are judged only for their own actions and are not tarnished by what their ancestors may have done. But our memory has become long and infinite. We never forget and never forgive. There is no place to hide. The database in the cloud will pursue us wherever we go. And it is not only digitization that is breathing down the mamzer’s neck; so is the concept of the sovereign Jewish state. Ever since the Diaspora communities were gathered together in the State of Israel, it has aspired to have a single rabbinate and unitary halakhah. No more town rabbis who ruled as they saw fit for themselves and their flock, and only rarely, after an exchange of letters, deferred to or influenced other rabbis. Instead, we aim for a single rabbinical hierarchy speaking in a single voice. In such a world, not only is it impossible to blend in; there is also no way to obtain a “second opinion” or act in accordance with a “minority view.”

Although mamzerut, which is the theme of last week’s conference sponsored  by the Israel Democracy Institute and the Center for Women’s Justice, is a status into which few are born — a few dozen in Israel every year (but also their sons and daughters) — it casts a giant shadow. The fear of mamzerut dominates all questions of marriage and divorce in Jewish law and jurisprudence. The sword of mamzerut that hangs over children who come into the world before their mother’s divorce is final, sharpened by women’s biological clock, becomes a major consideration in shaping agreements for the division of communal property and child custody — and an incentive for the man to refuse to grant a divorce or extort concessions.

We cannot turn the clock back. There is no forgetting, wails the High Holy Day liturgy, before the divine throne of modernism; today it is no longer possible for us either. So now the question we must deal with is how to protect those born into mamzerut. One form of forgetting is the application by the religious and civil authorities of the age-old legal presumption whereby infants are registered as the child of their mother and the man she is married to, irrespective of the identity of the biological father, along with a ban on DNA testing to determine paternity. This solution does “forget” mamzerut, but it infringes on the biological father’s right to a relationship with his children and the children’s right to financial support, inheritance, and a bond with the father. It also gives the “legal father” the right to decide on the children’s future (What school will they attend? Will they be vaccinated?) and saddles him with obligations that are not really his.

Another form of “forgetting” is envisioned in a bill drafted by the Center for Women’s Justice, would split the religious status (which would be followed by the rabbinical courts and which would recognize only a legal father) from the civil status (which would recognize the biological father for matters of inheritance, financial support, education, medical care, and so on). This is the situation for Muslims; their religious law does not recognize extramarital paternity (even though it has no parallel to mamzerut), but the courts do not refrain from granting Muslim children citizenship rights, financial support, and inheritance on the basis of the biological father.

In one of his poems, Yehuda Amichai proposed that we supplement the confessional prayer, “We have sinned, we have betrayed, …” with two additional transgressions: “We have forgotten; we have remembered.” Even today, in the age of digitization and the cloud, we can pray not only for a long memory, but also for a modicum of forgetting.

About the Author
Adv. Shlomit Ravitsky Tur-Paz is the Head of the Center for Religion, Nation, and State at the Israel Democracy Institute.
Related Topics
Related Posts
Comments