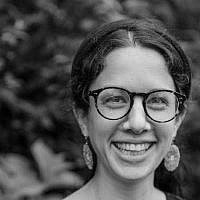 The Blogs
Shira Billet
Apply for a Blog
Please note that the posts on The Blogs are contributed by third parties. The opinions, facts and any media content in them are presented solely by the authors, and neither The Times of Israel nor its partners assume any responsibility for them. Please contact us in case of abuse. In case of abuse,
Report this post.

The book of Leviticus opens on a note of love and hopefulness after the tense and anxious conclusion of the book of Exodus, when Moses (Moshe) was unable to enter the Tent of Meeting, after the much-anticipated dedication of the newly completed Tabernacle. Leviticus brings renewed hope, in the simple and welcome opening words: “God called (vayikra) to Moshe, and spoke to him from the Tent of meeting…” (Lev. 1:1). Rashi writes that the term calling (k.r.h; vayikra) evokes a loving address. God called out lovingly to Moshe. After the fear of potential rejection, Moshe is lovingly called to the Tent of Meeting.

It is unusual for God to address a human being in the Torah with the verb k.r.h. God often speaks (d.b.r; vayedabber) to people, especially to Moshe, but rarely calls out. The midrash picks up on this uniquely loving mode of address, and gives great significance to the full phrase vayikra el Moshe – God called to Moshe.

The first dozen or so midrashim in Leviticus Rabbah explore the various unique attributes of Moshe, and all beautifully end with the verse, vayikra el Moshe – God called to Moshe. In a fascinating section of Leviticus Rabbah, the rabbis explore the possibility that God could have called to Moshe by one of his other names. After all, according to rabbinic traditions, Moshe had many names, including names that expressed great values and virtues. For example, according to a midrash in Exodus Rabbah, one of the names of Moshe was Tov (good, or goodness), a term with profound philosophical and theological significance.

Despite the availability of far loftier names, God chose to address Moshe with this particular name – Moshe – a name of unsophisticated, non-philosophical, quintessentially human origins.

The daughter of Pharaoh, having rescued an infant from the waters of the Nile, adopted and named him based on the unique circumstances of their initial encounter. “And she called (vatikra) his name Moshe. And she said, ‘For I drew him out (m.sh.h) from the water’” (Exodus 2:10). While modern scholars contest the biblical etymology given for the name Moshe, in its Biblical context the name is quite simple; it reflects uncomplicated, unearned, undeserved love – to quote the poet Anne Sexton – “love as simple as shaving soap.” A midrash in Leviticus Rabbah explores the implications of God’s choice to call Moshe into the Tent of Meeting lovingly, by this particular name.

The midrash opens with a hermeneutical principle, “The book of Chronicles can only be read via (midrashic) exegesis,” followed by an inscrutable verse from Chronicles: “And his Judean wife gave birth to Yared father of G’dor, and to Haver father of Sokho, and to Yekutiel father of Z’noah – these are the children of Bityah daughter of Pharaoh whom Mared had married” (I Chron. 4:18).  The verse states that someone’s Judean wife gave birth to a number of children, but also states that these children are the children of Pharaoh’s daughter, Bityah. The midrash offers an account of this perplexing claim.

“And his Judean wife” – this is Yokheved (i.e. the biological mother of Moshe). The midrash explains that although Yokheved is a daughter of Levi, she is called a Judean because she helped bring Judeans into the world. This is surely a reference to the midrashic identification, elsewhere, of Yokheved and her daughter Miriam with the Hebrew midwives who delivered the Hebrew infants in Egypt.

“father of G’dor” – There were many lawmakers and leaders that arose in Israel, but this one [Moses] was the father of them all. “And Haver” – for he connected (hibber) the children to their father in heaven…

The midrash identifies each of the names of the children with one particular referent. There are not many children, but one child, Moshe. This explains how there are two mothers identified in the verse: a biological mother, and an adoptive one.

This one child had many names, reflecting his many important attributes, e.g. teacher of the Torah, lawgiver, prophet, spiritual leader, peacemaker. By proliferating the names of Moshe, and by showing that each of these many names reflected lofty qualities and accomplishments, the midrash subtly constructs a case against God’s use of the name Moshe at that most profound moment of divine-human connection, when Moshe is lovingly called by name into the Tent of Meeting.

In this moment of loving calling out, at the beginning of the book of Leviticus, God gives precedence to the name of Moshe that was given to him by an Egyptian woman, the daughter of Pharaoh, rather than any of his other, more theological, philosophical, spiritual – or, we might even say, more “Jewish” – names.

It was a name that expressed the unconditional love and connection between a parent and a child, and nothing more.

The moment of being called into the most sacred of spaces is a foundational and defining moment in Moshe’s journey as a leader, and in the Israelites’ journey as a nascent people. This is a moment, if ever there was one, that calls for a new name, a new beginning. At foundational and transitional moments of leadership, Abraham’s name was changed from Abram; and Jacob’s name was changed to Yisrael; and – later – Hosea, successor of Moses, would have his name changed to Joshua. But Moshe, who had many names, indeed many significant and grand names worthy of a great leader, does not get a new name. Essentially, God mimics, in calling to Moshe to enter the Tabernacle, the moment when Moshe was named by Pharaoh’s daughter: Just as she “called him Moshe,” God “called out to Moshe.”

The moment of entering the Tabernacle, the most elevated earthly moment of Moshe’s life, is a moment of reaffirmation of his least complex, philosophical, or theological name.

The name reflects not his accomplishments as a leader nor the great hopes invested in him, not his godliness or proximity to the divine, not the concepts of goodness and perfection that were associated with him, but rather reflects the fact that he was loved unconditionally, based on no merit or achievement of his own, by a kind and generous stranger. In Leviticus 1:1, with “vayikra el Moshe,” God reaffirms this unconditional love, and elevates its significance above all other values.

About the Author
Shira Billet holds a PhD in Religion from Princeton University. She is a postdoctoral associate in Judaic Studies at Yale University, and a fellow at the Kogod Research Center at the Shalom Hartman Institute of North America. She is a member of the Advanced Kollel: Executive Ordination Track at Yeshivat Maharat.
Related Topics
Related Posts
Comments