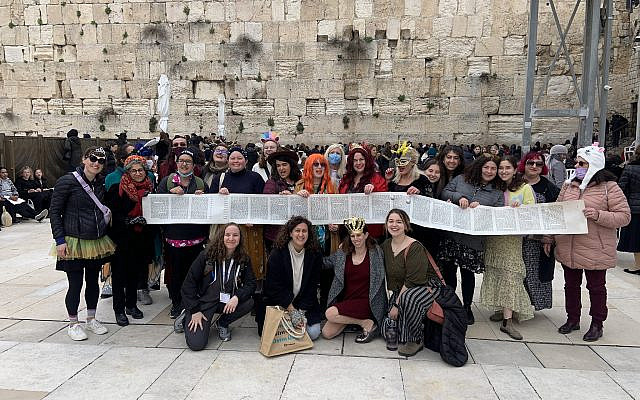 Photo by: Women of the Wall

Last Friday morning, my experience at the Kotel was starkly different from Rosh Hodesh, yet still managed to sting.

That morning, I went through the security check just like any worshiper- I was not prodded, nor did I have every tiny pocket in my clothing checked. I was not greeted by a chorus of screaming, booing, and whistling. I was surrounded by people dressed in costumes, walking around gleefully, shouting only “Chag Purim sameach!”

As I stood by the entrance to the women’s section, waiting for the rest of the group to arrive, a young seminary girl came by giving out Shabbat candles. I took the candles happily, as we laughed over having spoken in Hebrew despite both being English-speakers. “Purim sameach and shabbat shalom!” she called out as she walked down to the Kotel to pray with her friends.

According to Orthodox Judaism, women are obligated to hear megillah because they were part of the miracle that we are celebrating. We receive less vitriol from our opponents for reading the Megillah than we do reading from Torah. This is part of why we at Women of the Wall do not draw our usual crowds of protestors on Purim. But on Friday morning, Shushan Purim, I was painfully reminded that for the ultra-Orthodox, women’s voices aren’t meant to be heard – even in the women’s section amongst other women on the holiday that celebrates a woman’s heroism.

About twenty minutes into our Megillah reading, the sweet girl reappeared, but this time she showed a different side. Upon seeing the Women of the Wall reading Megillat Esther, rejoicing in the celebration of one of the most important women in Jewish history, the girl who had given me Shabbat candles came with her friends, jeering, laughing, pointing, and taking pictures. I couldn’t tell if she realized that she had given members of our group Shabbat candles just moments ago.

While I tried to focus on my friends beautifully reciting Megillah, I could not escape from the fact that groups of ultra-Orthodox women were ridiculing us, and averting their children’s eyes so that they didn’t see such an offensive sight – women reading Megillat Esther.

How ironic is it that on the day that we celebrate Queen Esther’s using her power and voice to save the Jewish people, there are Jewish women who want to silence a group of women reading this very story? How twisted is it that the young girl who has been taught to give Shabbat candles to women, a truly beautiful weekly tradition, has also been taught to turn and ridicule the same women just for celebrating a holiday differently?

Purim is supposed to be a completely joyous occasion. And I did enjoy hearing women’s voices reading the story of Queen Esther. I also enjoyed leaving the Kotel without getting spat on, threatened and called a whore. Despite the lovely service and our relative comfort and safety, I could not escape the hatred that inevitably taints every Women of the Wall service. My sincerest wish is that all Jewish women and girls find empowerment in Judaism, just as Queen Esther fought for, and that no woman ever has to be silenced.