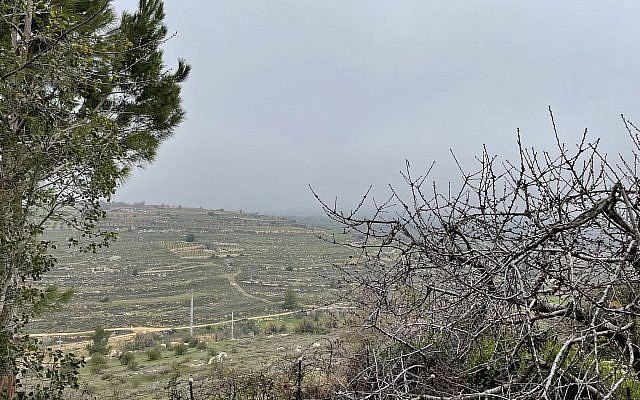 Where is the Sun (or even Spring)? (photo by Barry Lynn)

Here in Israel, we might think that global warming is really global cooling, but as reported by Dr. Jim Hansen (and fellow researchers) regarding this past winter season: “Most of Eurasia was remarkably warm, 2-5°C above normal. The winter seemed cold to many people in North America, but a very warm December (Fig. 1) made the season well above normal in the U.S.”

We were not warm this winter because the source of our weather this winter season has been more often than not: Siberia, which is one of the few areas of the world with below normal temperatures. For us, this has led to extended cold periods and plenty of opportunities for snow. In fact, our last storm was so cold it snowed in many locations just a few hundred meters (or so) above sea-level. Yet, the storm was bit too far east to produce a heavy snow, even with the cold.

Still, snow or winter lovers should not give up: this upcoming week should bring us another period of unusually cold weather and chance for snow (and this time, precipitation should be heavier than the last storm, meaning the potential for a large snowstorm at the end of March is ever present).

Yet, strangely, we know that all we need to do is will it and it will happen, or at least that was the message in the movie “Field of Dreams.”  But, really, we do live in a very strange world. For instance, the way we see the world and the way the world is at the Quantum level are really quite different.  For instance, the quantum double slit experiment shows that a photon or electron that must pass through one of two slits before reaching a detector appears to pass through both slits at the same time — unless we try to observe which slit it passes through. Then, when we observe the particle, the wave like pattern on the detector from a single particle devolves to a simple non interference pattern (two vertically marked areas on the detector). Even more strangely, even if we determine which slit the particle has passed through after the particle has already hit the detector, the wave like pattern again devolves to the noninterference pattern we would expect from a single particle passing through either slit at a time. So, we think of time as going forward and that time is just a series of disconnected measurements, when it may not be anything like that!

Adam Becker’s excellent book “What is Real: the Unfinished Task for the Meaning of Quantum Theory” discusses the potential implications of these experiments. One such implication is that we possibly live in a multiverse. That is, life is simply a probability distribution, and our existence within is simply the result that someone has bothered to take note that we exist (or at least they do). This has its most extreme interpretation in “Beyond BioCentrism” where the authors conclude that we exist and the world exists only because we are conscious of ours and its existence.

All of this, of course, is relevant to our subject at hand: will it or will it not snow (quite a lot) next week. Or, to stop beating around the bush: will it snow if simply enough people imagine it will (or are there too many people that are dreaming instead of green fields and wildflowers)?

All I can say is that I hope there is some universe where the meteorologist got it or will get it right, and my hope is that in some universe readers of the Times of Israel hold their resident weatherman in high regard.

To answer my wife’s question: the sun is hidden behind the clouds, and so long as cold air continues to flow by way of Siberia, the warm, moist sea air overriding the cold (but modified) Siberian air will rise, cool, condense, and form clouds. It is one possible (but perhaps temporary) outcome of a warming world, and an opportunity for winter to bring a very early Spring surprise.