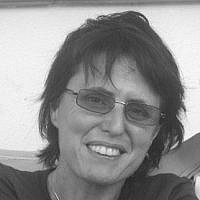 The Blogs
Kay Wilson
Survivor of terrorism, author of 'The Rage Less Traveled.'
Apply for a Blog
Please note that the posts on The Blogs are contributed by third parties. The opinions, facts and any media content in them are presented solely by the authors, and neither The Times of Israel nor its partners assume any responsibility for them. Please contact us in case of abuse. In case of abuse,
Report this post.

While the blood of innocents was being mopped up off a theater floor in France, a video titled, “A father and son have the most precious conversation,” goes viral. In the clip the boy tells his father, “We should leave Paris because Les Mechants (the villains) have guns and they will come to shoot us.” The father reassures his son that although the villains have guns, they (the French) have flowers and candles. “Do the flowers and candles protect us?” asks the son. When the father answers in the affirmative, the boy protests, “but flowers don’t do anything!” He is given a reassuring hug by his father and the clip is concluded by the interviewer asking the child if he “feels better,” to which the boy nods and breaks into a smile.

This video was “shared” and “liked” millions of times. Indeed, who can fail to be moved by Western virtues of life over death, culture over barbarity and goodness over evil? In an act of defiance, civilized people who refuse to hate, expel the stench of murder and savagery with fragrant flowers and scented candles, because civilized people believe that hate “will give the terrorists what they want.”

A psychopath has no capacity to feel, so he is unable to care whether you hate him or not.

When a psychopath Islamist butchered me with his machete, he did it with such force that his blows snapped my ribs and shattered more than thirty bones. His only emotion was exasperation: he was “peeved” that a serrated blade was not the ideal tool, because it kept wedging itself into bone, making it “tricky” to tug it out without my blood spurting out over his clothes. They hacked without fury. Murder was a nonchalant, everyday affair, as mundane as the cigarette they smoked after wiping our blood from their knives.

These cold-blooded Palestinian psychopaths who held a machete in one hand and a Marlboro in the other, are exactly the same sort of Islamist maniacs who murdered the innocents in Paris. They are sons of Evil, dead in their souls and unreceptive and impervious to the noble morals of Westerners who refuse to hate.

Following the Paris attack, live on British television, someone “photobombed” the shoot and cursed ISIS. Immediately the broadcast returned to the anchor who shuffled in her seat while apologizing profusely for the “unexpected bad language.” Given the backdrop of slaughtered corpses piled up on the floor, I would be surprised if anyone with any decency, would actually be offended by hearing someone rage at ISIS by telling them to “fuck off.”

Repression of rage in the name of culture, and sanitizing language in response to savagery, is an inverted, delusional, trivial, misplaced and dangerous morality — as if clean speech is the dominating virtue.

Rage is not a dirty word, it is not a moral failure. It is a moral necessity and it is a virtue.

We must rage at those who try to murder us and our children, because murder is the most cosmic and irreparable violation known to both man and mankind. Murder steals from families and plunders the unborn generations. Murder grieves friends. Murder rips out souls from communities. Murder wounds a nation and murder irreparably damages our world.

After the murder I too, had no hate. Barren of rage, fury, contempt or disgust, I was wrapped in a protective and balmy dressing of indifference that covered the deep, dark, psychological lesions. I could reel off details of Kristine’s execution with the same passion as reading a bus timetable. And most horrifying of all, I knew that if I ever again had to have the “misfortune” of witnessing a human being chopped up before my eyes, I would be able to watch it happen while smoking a cigarette.

Like any dressing though, leaving it in place would result in infection, gangrene and ultimately death. I had at some point to remove it by owning my right to rage.

The nights were never-ending and even the days felt like night. I clawed my pillow and drenched it with tears. Rage came, rage went and rage came again. It appeared unexpectedly in verbal outbursts on innocent bystanders, or as unleashed fury on unsuspecting walls.

Yet despite the long night, the sun did rise again. It shone its light in the form of those mature and brave enough who validated my rage and simultaneously did all that they could to engage me with the mundane and all that life has to offer.

And thus I embarked on The Rage Less Traveled.

On The Rage Less Traveled, I am compelled to make our world a better place, because once again I have tasted goodness.

On The Rage Less Traveled, I am compelled to act against evil. I make it my business to write letters and lobby governments, to do what I can to ensure that the cold-blooded, Palestinian, psychopaths who tried to murder me, will no longer receive a monthly salary of American and European taxpayers money.

On The Rage Less Traveled, I speak on behalf of victims of Palestinian terrorism, those who are no longer here to speak for themselves.

On The Rage Less Traveled, I empower Jewish students on American campuses who are experiencing antisemitism — that same hate that enabled a Palestinian Islamist to hack to death an American Christian because they thought she was Jewish.

Yet on The Rage Less Traveled, there are terms and conditions.

I have to accept moral limitations. I must not take vengeance into my own hands and I am forbidden to disseminate hate speech. It is not for me to indulge in an untamed fury that holds every single Palestinian, Arab or Muslim accountable for the heinous deeds of two savages spurred on by the incitement in the Palestinian Authority — an authority whose almost daily targeted, executions of Jews, alarmingly mimics Nazi policy.

The Rage Less Traveled is a lifelong path, a road of anguish and tears, yet one of contentment and hope. I have always believed that we should befriend those different than ourselves because it challenges stereotypes, cages bigotry, tempers xenophobia and enriches our own world. It has not been easy for me to reach out to Muslims since the attack, but by both owning and limiting my rage, I have managed to travel to Egypt (an Islamic nation) to meet an Egyptian peace activist. Further, I have helped a Palestinian friend via social media kickstart his small business and lastly I have hidden a Muslim teenager in my house at the risk of my own life. Mohammad Zoabi, a Muslim, was ironically the victim of Islamist death threats.

We must rage: and it is at Islamism, that we must rage.

Righteous rage will impel decent people to act, not out of generic and immoral vengeance, but to specifically and legally target an Islamism that wants to murder Judeo-Christian heritage and butcher the “infidels” who do not submit to their Sharia inferior ideology of hate.

Islamism infests Western school curriculums. Islamism infects media. Islamism is rampant in Western “charities.” Under the guise of helping “poor Palestinians,” Islamism channels donations to fund terrorism. Islamism is preached in sermons in European mosques. Islamism speaks on street corners and in public parks. In the name of free-speech, and in French, Flemish, German, Swedish, Spanish and Cockney accents, it spews out hate, vilifies “Zionists” and calls for Jihad against the only democracy in the Middle East. Islamism marches on the cobbled streets of Europe demanding the implementation of Sharia Law. Islamism ensures that Jewish schools and synagogues need protection night and day. Islamism contaminates the workplace by demanding that Christians who wear a cross to work are fired on the grounds that “it is offensive.” Personally speaking, I find the bullying, intimidation and murder of “infidels” far more offensive than a necklace hanging around someone’s neck — but that’s just me.

The Rage Less Traveled is the hardest way but the only way. The alternative routes are paved with the thousands of beheaded torsos of Eastern Christians, the strewn corpses of Boko Haram and the mutilated bodies of Yazidi children. There are also no flowers on these roads except the forest cyclamens drenched in the blood of my Christian friend and the only candle that burns, is her Candle of Memorial that flickers and refuses to die.

About the Author
Kay Wilson is a British-born Israeli tour guide, author, jazz musician and cartoonist. She is the survivor of a brutal machete attack that occurred while she was guiding in December 2010. Since the terror attack, she has spoken to audiences all over the world about her ordeal. In her role as representative of Palestinian Media Watch, she lobbies Western governments to end the foreign aid that rewards her would-be murderers. Together with a Palestinian friend, she has created “The Yellow Brick Road,” an educational project that teaches Muslim children in a refugee camp emotional intelligence, empathy and courage.
Comments