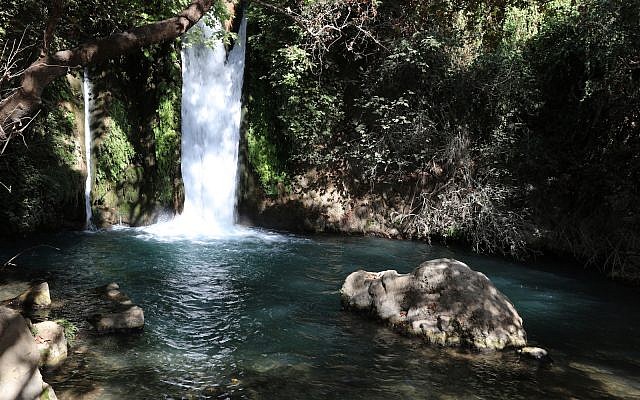 Illustrative. Waterfall at the Banyas Nature Reserve in the upper Galilee. (via iStock)

It starts with a powerful headache; agonizing muscle pains that come and go in a seeming random pattern; chills; occasional vomiting; abdominal pains; and sometimes a touch of jaundice. The wave of people admitted to the emergency wards all reported similar symptoms. It could have been flu, but the season was wrong, after all, it’s the middle of August. So what was making dozens of Israelis from all over the country so sick?

It didn’t take long for the doctors to conduct some elementary epidemiology. All of the affected patients had recently been vacationing in the Golan Heights. Enjoying the wide open landscapes, they invariably sought relief from the scorching sun by immersing in the cool pools and streams that make these highlands choice tourist destinations every summer. The Meshushim pools, the Jilaboon stream, the Yehudiah, the Zacki and other iconic water bodies are usually synonymous with pristine rejuvenation for the sweaty hiker. But measurements soon confirmed that this summer, the water was highly contaminated with bacteria, which left many of the bathers infected with something called leptospirosis.

While leptospirosis is a very unpleasant experience, it falls a little bit short of being a public health disaster. Some people are entirely asymptomatic and most of the more obnoxious symptoms pass with the administration of antibiotics. But there are also cases where the bacteria cause significant damage to kidneys and the liver. Meningitis is not entirely uncommon in worst case scenarios. So nobody was being dismissive. Most of the Golan natural swimming sites were closed and, sadly, will remain so throughout the upcoming High Holiday vacation. And still the question remains: how did these lovely ponds and streams become hotbeds for leptospirosis?

The Hebrew term for the illness is both more literal and more telling than the international medical nomenclature: The disease is known locally as “Achberet,” which technically could be translated as rat-itis. The vernacular reflects the disease vector: Rodents are the original agents, transmitting the bacteria through their urine to livestock – especially cows — with whom they share living space. Cattle in the Golan Heights are typically free to roam – all the way to the water’s edge. So, when people dive right in, they become exposed to the microbes via open sores or even their eyes.

There have been cases of leptospirosis in Israel before, but it never posed such an acute health risk. To begin with, the country’s cattle herds are modest in size. And the Golan streams readily renew themselves with perennial flows that prove to be too strong for significant propagation of bacteria. This summer, however, conditions were different. Five continuous years of low rainfall are manifested in desiccated stream beds throughout the Galilee. It turns out that these conditions became something of a “perfect storm” for mass contamination.

The finger pointing between government agencies began as soon as the story broke. Farmers were reproached for letting their cattle run roughshod over the Golan rangelands, avoiding the hassle and expense of fencing. The Nature and Parks Authority was taken to task for being lax in its land management. The Health Ministry was slow to respond. And everybody was happy to blame the rodents and the cows.

Truth be told, however, the real source of the problem is not to be found in the barns or even along the stream’s edge. Rather we need to look to the sky. Israel’s precipitation patterns have changed. While Israel’s five continuous drought years are frequently referred to as anomalous, the lowered levels of rainfall in the Kinneret watershed are here to stay.

And conditions are probably going to get worse. A recent report assessing climate change mitigation measures prepared by Israel’s Ministry of Environment estimates that there ultimately may be a 25% drop in average rainfall levels. Greater aridity and lower flows are the new normal. When you add to that increased evaporation due to higher temperatures and the ongoing tapping of limited water sources for agricultural and municipal needs, you have a hydrological system that is slowing drying up. The germs simply have a field day in such a stagnant system, with some Golan stream measurements showing harmful bacteria concentrations 11 times above permissible levels.

No more than a week had gone by when newspapers were filled with yet another public health crisis, this one a bit more perilous. Female mosquitoes carrying the West Nile Virus had migrated to Israel once again, with their stings causing 68 acute cases of the illness and two deaths. West Nile mosquito invasions are not new to Israel. But research from around the world confirms that climate change is expanding the range of these pernicious pests.

When thinking about ways to solve environmental problems it is helpful to distinguish between indirect and“direct drivers. Direct drivers frequently require immediate, tactical interventions. These can be effective in the short-run. Make no mistake: Israel needs to do a better job managing the Golan Heights livestock. More meticulous fencing and ranching will help.

The Nature and Parks Authority is now scrambling to pump waters into Golan stream heads — to flush out the stagnant bacteria and mosquito breeding grounds ahead of the Rosh Hashanah crowds. (This may be good for people who hopefully will be able to splash around a little more without getting sick. At the same time, bringing the relatively salty water of the Kinneret to the Golan streams will probably not help the aquatic ecosystems that are used to water with much lower salinity and mineral levels).

Israelis are surely smart enough to understand the projections of climate models and the long-term implications of reduced flow in their natural water systems. Adapting to climate change promises to be an important challenge in public policy for the foreseeable future. But ultimately, all of these measures only address symptoms.

Nobody seems to be talking about the underlying cause of these recent disease outbreaks and what really needs to be done. This is unfortunate. But as we muddle forward to make these adjustments, it is well to remember a few things: people continue to release the greenhouse gases that are changing the weather; We know what can be done to reduce our individual and collective carbon footprint; and it is not too late to stop catastrophic climate change…yet.