A 4-year old child had just been diagnosed with a genetic disease, and the hearts of his parents flooded with anguish. In despair, they turned to the late Lubavitcher Rebbe– whose ‘Yahrzeit’ and day of passing falls tonight and tomorrow– and asked for a blessing for their son. The Rebbe’s response did not tarry: “I will pray for your son at the gravesite of my father in law,” was the Rebbe’s reply.

A few months elapsed, and the genetic disease of this 4-year old boy destabilized and deteriorated. In fact, the doctors were now suggesting that their son subscribes to a daily dosage of medication for… life! So his parents wrote back to the Rebbe asking for yet another blessing. The Rebbe – whose mailbox was inundated with close to one thousand letters daily from Jews worldwide – took the time to respond to these anxious parents and wrote back: “I already promised you: I will pray for your son at the gravesite of my father in law,” the Rebbe reassured them.

Sure enough, the four-year old boy’s condition stabilized, and Baruch Hashem, blessed be God, this boy today lives in Scottsdale, Arizona, happily married with eight children, and he leads a healthy life, without any medical hiccups.

You see, I know that child quite well. For that child, is me. 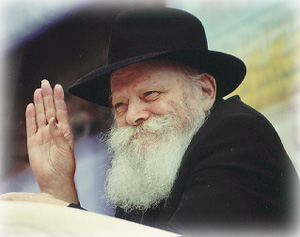 What moves me most about my personal story, is not necessarily the Rebbe’s blessing of healing that was fulfilled, although it surely deserves recognition and praise. What moves me most is not even the Rebbe’s unconditional attention and care toward a family in despair, although that too is a noble reason to celebrate the Rebbe’s leadership and holiness. What moves me most, is that although a few months had gone by, the Rebbe never forgot me, that 4-year old child and my medical condition, and he reassured my family with his gentle, warm, and unforgettable words, “I already promised you that I will pray.” In other words: “Don’t worry. I haven’t forgotten you. Your dear son continues to be in my prayers.”

This personal story speaks to the unparalleled leader the Rebbe was to us, to the Jewish people, and to humanity. He may have been a man of the world, whose advice was sought by presidents of nations and chairmen of corporations. He may have broken the Guinness book’s record for the amount of letters received daily from Jews and non-Jews alike all around the globe. He may witnessed, and yes, felt, the pain and tears of thousands of visitors who confided in him their deepest secrets. But the Rebbe never forgot the lonely cry of a single child and his parents.

We live in a broken world. Many face daunting challenges. Others, carry deep ache and hurt. As we commemorate the 21st Yahrzeit of the Lubavitcher Rebbe of blessed memory, may I suggest that we too learn from his ever-living and forever-relevant model. May we enhance and unleash the sensitivity of our hearts and reach out to at least one person in need. And may this Rebbe-like approach to each and every individual, create a ripple-effect of true care and unconditional love in all of our dealings, with all of our encounters, through all of our actions.

The Rebbe’s attention to my cry changed my life. Without a doubt, the attention that we will devote – in the Rebbe’s honor — to someone else’s cry, will also change other lives, heal our world, and carry on the Rebbe’s shining legacy, for eternity.